Legio quarta decima Gemina ("The Twins' Fourteenth Legion") was a legion of the Imperial Roman army, levied by Julius Caesar in 57 B.C. The cognomen Gemina (properly Geminia i.e. dedicated to the Gemini, Romulus and Remus, the legendary founders of Rome, who were supposedly suckled by a she-wolf) The cognomen Victrix (victorious) was added by Augustus following their service in the Pannonian War c. A.D. 9. The emblem of the legion was the Capricorn,[1] as with many of the legions levied by Caesar,[1] or the crossed thunderbolts of Jupiter. At some point it also acquired the cognomen 'Martia'.

The XIIII G.M.V was raised by Caesar in Cisalpine Gaul during his raids into, and conquest of, Gaul. Their enlistment term was for 16 years, as per the other legions (though Augustus raised that to 20). For years after the Massacre at Atuatuca,[2] they were viewed as an unlucky legion. They were frequently left behind to guard the camp during battles and raids.

The XIIII G.M.V fought under General Germanicus Caesar against the German rebel Hermann, better known as Arminius. A decade before this campaign, Hermann succeeded in wiping out three entire legions in the Battle of the Teutoburg Forest, one of the greatest disasters in Roman military history. They sealed a victory for Germanicus, and earned him a triumph from his adopted father, Emperor Tiberius.

Stationed in Moguntiacum, Germania Superior, since AD 9, XIIII Gemina Martia Victrix was one of four legions used by Aulus Plautius and Claudius in the Roman invasion of Britain in 43, and took part in the defeat of Boudicca in 60 or 61. At the stand at Watling Street the 14th defeated Boudicca's force of 230,000, according to Tacitus and Dio, with their meager force of 10,000 Legionaries and Auxiliaries. This act secured them as Nero's "most effective", and kept them garrisoned in Britain during the next few years to keep the uneasy tribes in check. After which, in 68 it was stationed in Gallia Narbonensis.

Rebellion on the Rhine

In 89 the governor of Germania Superior, Lucius Antonius Saturninus, rebelled against Domitian, with the support of the XIIIIth and of the XXI Rapax, but the revolt was suppressed.

When the XXIst legion was lost, in 92, XIIII Gemina was sent in Pannonia to substitute it, camping in Vindobona (Vienna). After a war with the Sarmatians and Trajan's Dacian Wars (101–106), the legion was moved to Carnuntum, where it stayed for three centuries. Some subunits of Fourteenth fought in the wars against the Mauri, under Antoninus Pius, and the legion participated to the Parthian campaign of Emperor Lucius Verus. During his war against the Marcomanni, Emperor Marcus Aurelius based his headquarters in Carnuntum.

In support of Septimius Severus

In 193, after the death of Pertinax, the commander of the Fourteenth, Septimius Severus, was acclaimed emperor by the Pannonian legions, and above all by his own. XIIII Gemina fought for its emperor in his march to Rome to attack usurper Didius Julianus (193), contributed to the defeat of the usurper Pescennius Niger (194), and probably fought in the Parthian campaign that ended with the sack of the capital of the empire, Ctesiphon (198).

In support of imperial candidates 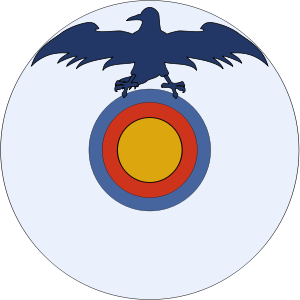 Shield design of the Quartodecimani, a comitatensis legion under the Magister Militum per Thracias, 5th century, according to Notitia Dignitatum.

At the beginning of the 5th century, XIIII Gemina was still assigned at Carnuntum. It probably dissolved with the collapse of the Danube frontier in 430s. The Notitia Dignitatum lists a Quartodecimani comitatensis unit under the Magister Militum per Thracias; it is possible that this unit is XIIII Gemina.