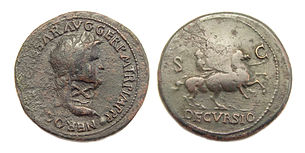 Legio decima Gemina ("The Twins' Tenth Legion"), was a legion of the Imperial Roman army. It was one of the four legions used by Julius Caesar in 58 BC, for his invasion of Gaul. There are still records of the X Gemina in Vienna in the beginning of the 5th century. The legion symbol was a bull. Early on in its history, the legion was called X Equestris (mounted), because Caesar once used the legionaries as cavalry.

In the Gallic Wars, X Equestris played an important role on Caesar's military success and for this reason is sometimes said to be his favorite. In Caesar's campaigns they were present in the battle of the Sabis, the invasions of Britain, and the battle of Gergovia. They remained faithful to Caesar in the civil war against Pompey, being present in the battles of Pharsalus (49 BC) and Munda (45 BC). In 45 BC Caesar disbanded the legion, giving the veterans farmlands near Narbonne in Gaul and in Hispania.

The legion was reconstituted in 42 BC and fought for Augustus (then Octavian), Lepidus and Mark Antony in the Battle of Philippi against the murderers of Caesar. After this, they followed Mark Antony in his campaign against Parthia and were defeated with him at Actium. Augustus then took control of the legion and settled the veterans in Patras. The legion rebelled and lost its cognomen Equestris as punishment. Replacements were added from other legions, and the Tenth was rebaptized Gemina.

The newly formed X Gemina was relocated to Hispania Tarraconensis, where Augustus was preparing a campaign against the Cantabrians. They stayed in Hispania for many years and their veterans were among the first inhabitants of modern Zaragoza and EMERITA Augusta, modern Mérida.

Under the Flavian dynasty

Error code: 1
Position of Roman legions in 80. X Gemina was in Nijmegen (mark 4), with XXII Primigenia.

In 70, after the Batavian rebellion was suppressed by Vespasian, X Gemina was sent to Batavia in Germania Inferior to police the lands and prevent new revolts. From 71 to 103, the legion was stationed at the base built by II Adiutrix at Oppidum Batavorum, the present day Dutch city of Nijmegen.

As part of the army of Germania Inferior, X Gemina fought against the rebellion of the governor of Germania Superior, L. Antonius Saturninus, against Emperor Domitian. For this reason, the Tenth — as well as the other legions of the army, I Minervia, VI Victrix, and XXII Primigenia — received the title Pia Fidelis Domitiana, "faithful and loyal to Domitian", with the reference to the Emperor dropped at his death and subsequent damnatio memoriae.

During the Trajan's first campaign in Dacia, (101-102) the legion participated at the Second Battle of Tapae, fighting against the army of the Dacians led by King Decebalus.

In 103, it was moved to Aquincum and later to Vindobona (modern Vienna), in Pannonia Superior, which would be the legion's camp until the 5th century.

Vexillationes of the X Gemina fought against the rebellion of Simon bar Kokhba in 132-135, in Iudaea, others participated in the Parthian campaign of Lucius Verus in 162. Another major campaign was the one fought against the Quadi, Marcomanni and the Lombards, in Moravia, (Dyje-Svratka Vale) under the command of Emperor Marcus Aurelius (168-180). A garrisson of Legio X GPF was found in the Czech Republic in Roman fortress in Moravia (Mušov)

X Gemina supported its governor, Septimius Severus, in his bid for purple, and many men of the legion went to Rome to become part of the Praetorian Guard of the new Emperor.

During the 3rd century, the legion fought for several emperors, who awarded the legion with titles showing the fidelity of the legion and the favour gained by the Emperor himself. The titles Antoniniana (awarded by Caracalla or Elagabalus), Gordiana (by Gordian III), Deciana (by Decius), Floriana (by Florianus), and Cariniana (by Carinus) were short-lived, however, and dropped after the death of the Emperor. For its support of Emperor Gallienus against Postumus, the Gemina was awarded the title Pia VI Fidelis VI, "six times faithful, six times loyal".