From Infogalactic: the planetary knowledge core
Jump to: navigation, search
For other uses, see Legion of Mary (disambiguation).

The Legion of Mary (Latin: Legio Mariae) is an international association of the faithful of the Catholic Church who serve the Church on a voluntary basis.[1] It was founded in Dublin, Ireland, as a Roman Catholic Marian Movement by layman Frank Duff. Today between active and auxiliary (praying) members there are over 10 million members worldwide making it the largest apostolic organization of lay people in the Catholic Church.[2] Membership is highest in South Korea, Philippines, Brazil, Argentina and the Democratic Republic of Congo. These countries have between 250,000 and 500,000 members each.[3]

To be in the Legion of Mary, one must be a practicing Catholic. Active members serve God under the banner of Mary by practicing the Spiritual Works of Mercy. The main apostolate of the Legion consists in activities directed towards all men and women, young and old, rich and poor as well as people from the margins of society (homeless, prostitutes, prisoners etc.) and towards non-Catholics. The members of the Legion are primarily engaged in the performance of the Spiritual Works of Mercy rather than works of material aid.[4]

The Legion of Mary was founded by Duff on September 7, 1921 at Myra House, Francis Street, in Dublin.[5] His idea was to help Catholic lay people fulfil their baptismal promises and be able to live their dedication to the Church in an organised structure, supported by fraternity and prayer. The Legion draws its inspiration from St. Louis de Montfort's book True Devotion to Mary.

The legionaries first started out by visiting hospitals, but they were soon active among the most destitute, notably among Dublin prostitutes. Duff subsequently laid down the system of the Legion in the Handbook of the Legion of Mary in 1928.

The Legion of Mary soon spread from Ireland to other countries and continents. At first, the Legion often met with mistrust[by whom?] due to its dedication to lay apostolate which was unusual for the time.[citation needed] After Pope Pius XI expressed praise for the Legion in 1931, the mistrust was quelled.[citation needed]

Most prominent for spreading the Legion was the Irish legionary Venerable Edel Mary Quinn for her activities in Africa during the 1930s and 40s. Her dedication to the mission of the Legion even in the face of her ill health due to tuberculosis brought her great admiration in and outside of the Legion. A canonization process is currently under way for Quinn and a beatification process is currently underway for Duff, and for Servant of God, Alfie Lambe (1932-1959), Legion Envoy to South America.

Membership in Ireland had been declining but due to efforts by the Concilium to attract younger people to its ranks through the Deus et Patria movement a substantial increase[quantify] in membership has now occurred.[when?]

On March 27, 2014 the Secretary of the Pontifical Council for the Laity, Bishop Josef Clemens, delivered the decree in which the Legion of Mary is recognized by the Holy See as International Association of the Faithful.[6]

The basic unit of the Legion is called a praesidium, which is normally based in a parish. The praesidium, usually a group of 3-20 members, meets weekly in its parish. The Curia is the next level up, and one Curia supervises several Praesidia. The next level is the Comitium, which is in charge of several Curiae, usually over an area like a medium city or a part of a province. The following level is the Regia, in charge of larger territories like a province or state (in the U.S. and Brazil). The Senatus is the next highest level, and it generally has control over the Regiae in a very large area, usually a country or very large territory. The Concilium is the highest level. It has its seat in Dublin, Ireland, and has control over all of the Legion.[7]

Each level of the Legion of Mary has the same officers: The President, the Vice President, the Secretary, the Treasurer, and the Spiritual director. The latter must be a priest or a religious. All other offices are held by laymen or -women.[7]

Membership is open to all baptized Catholics. After visiting a praesidium a few times, one can join the legion as a probationary member. This probationary membership lasts for three months, after which he or she has to decide whether to join the Legion as an active member permanently. During the probationary period, probationary members learn about the legion system by reading the Handbook of the Legion of Mary and its active works by listening to reports of active works undertaken by fellow legionaries. At the end of probationary period, members say an oath of "Legion promise", a pledge of allegiance to the Holy Spirit and to Mary, in order to become a permanent active member. Membership in the Legion of Mary is essentially based on discipline and commitment. Members devote their time and prayer for the intentions of Mary, Mother of God. Members can withdraw from the Legion by informing the president of his or her praesidium.[7]

Active members: They regularly attend the weekly sessions of their praesidium and pray daily the prayer of the Legion, the Catena Legionis, which consists essentially of the Magnificat and some shorter prayers. Their main role lies in active apostolate for the Legion and the Church. Active members under the age of 18 are not allowed to give the "Legion promise" until they turn 18. Members 18 and under are considered Juniors, and are able to hold any office except President in their praesidium. Above the level of the praesidium, no Junior may serve as an officer.[7]

Auxiliary members: They support the Legion through their prayer. They pray the whole booklet of Legion prayers, the Tessera, every day. The Tessera consists of the Invocation, prayers to the Holy Spirit, the Rosary, the Catena, and the concluding prayers of the Tessera.

Praetorians: This is a higher grade of active membership. In addition to their duties as active members, Pretorians pray the Rosary, the Divine Office and go to Holy Mass daily.

Praetorians and Adjutors do not have higher status or higher rank inside the Legion system. The meaning of these grades is only a desire for a more devotional life, not for higher status. Entering the grade is done by registering with a list of Praetorians/Adjutors and by subsequently observing their duties.[7] 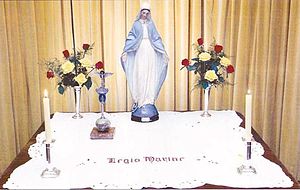 Altar of the Legion of Mary

The praesidia of the Legion normally meet weekly, larger entities normally monthly or at even rarer occasions.

For all sessions, the Altar of the Legion is set up (see picture). This consists of a statue of the Virgin Mary (represented standing on a globe, her arms extended, crushing the serpent with her foot) that is placed on a white tablecloth that has "Legio Mariae" written on it. On the two sides of the statue are placed two vases with flowers, often roses (the flower connected with Mary). On the front ends of the cloth stand two candlesticks with burning candles. On the right side of Mary, the vexillium Legionis (standard of the Legion) is placed. It is made out of metal and onyx and shows the Holy Spirit in the form of a dove, as well as the Miraculous Medal.

During the meetings, all prayers of the Tessera are said. The sessions start out with the introductory prayers to the Holy Spirit and Mary. These include five decades of the Rosary. The following part of the session includes a spiritual reading and administrative matters. Each member tells in short words how he or she has fulfilled their tasks assigned to them at the previous session. They also discuss and/or read a chapter from the Handbook of the Legion. Then the Catena Legionis is prayed, afterwards the Spiritual director or (if he is absent) the President holds a short sermon about spiritual matters (allocutio). Finally, the new tasks for the legionaries are distributed. Each meeting ends with the concluding prayers of the Tessera and a prayer for Frank Duff's beatification.[7]

The spirituality of the Legion of Mary is essentially based on the approach of St. Louis-Marie Grignon de Montfort as put forward in his book True Devotion to Mary.[8] Grignon de Montfort promoted a "total dedication" to Christ through devotion to the Blessed Virgin Mary, which later also influenced popes such as John Paul II, as mentioned in his Apostolic Letter Rosarium Virginis Mariae.

Another important element that shaped Legion spirituality was Frank Duff's devotion to the Holy Spirit. He promoted the (in popular devotion often neglected) adoration of the Third Person of the Trinity through the Virgin Mary, Whom he saw as the "visible image" of the Spirit. This is why the introductory prayers and the Legion promise are directed to the Holy Spirit and the vexillium Legionis bears His image in the form of a dove.

The essential aim of the Legion of Mary is the sanctification of its members through prayer, the sacraments and devotion to Mary and the Trinity, and of the whole world through the apostolate of the Legion.

The idea of a Catholic lay apostolate organization where ordinary laypeople in all situations of life would work for their own sanctification and for the conversion of the world was the first of its kind.[citation needed] After the Second Vatican Council (1962–65) promoted such ideas in its conciliar documents, this approach gain wider acceptance in the Catholic Church.[citation needed]