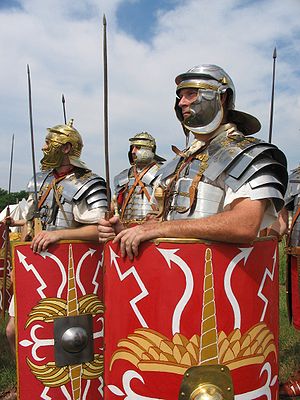 A recreation of the appearance of Roman legionaries wearing the lorica segmentata, 1st-3rd century.

The Roman legionary (Latin: legionarius, pl. legionarii) was a professional heavy infantryman of the Roman army after the Marian reforms. Legionaries had to be Roman citizens under the age of 45. They enlisted in a legion for twenty-five years of service, a change from the early practice of enlisting only for a campaign. The last five years were on veteran lighter duties.

Regular trained legionaries were known as milites and were the equivalent in rank of the modern private. Included in the ranks, aside from the milites, were the immunes, specialist soldiers with secondary roles such as engineer, artilleryman, drill and weapons instructor, carpenter and medic. These men were still fully trained legionaries, however, and would fight in the ranks if called upon. They were excused from some of the more arduous tasks such as drill and fatigues and received better pay than their comrades in arms.

On the march in unfriendly terrain, the legionary would be loaded down with armour commonly lorica hamata, lorica squamata, or 1st-3rd century lorica segmentata, shield (scutum), helmet (galea), two javelins (one heavy pilum and one light verutum), a short sword (gladius), a dagger (pugio), a pair of heavy sandals (caligae), a sarcina (marching pack), about fourteen days' worth of food, a waterskin (bladder for posca), cooking equipment, two stakes (sudes murale) for the construction of palisades, and a shovel or wicker basket.

The Roman soldier underwent especially rigorous training; discipline was the base of the army's success, and the soldiers were relentlessly and constantly trained with weapons and especially with drill — forced marches with full load and in tight formation were frequent. Weighted weapons that were heavier than standard issue were used for training. Discipline was important and infractions were heavily punished by the centurions. Punishments could range from being obliged to spend the night outside the protective security of a fortified camp, through being beaten with clubs (fustuarium), to the stoning of individuals or unit executions involving decimation. However, honors, rewards and promotions were frequently awarded to legionaries who distinguished themselves in battle or through exemplary service.

Legionary is also a term used for members of various military forces which have been accorded the title of "legion", although bearing no resemblance to the heavy infantry of ancient Rome. In the 18th and early 19th century this designation was sometimes accorded to units which comprised both mounted and foot components. More recently the title has been used by the French Foreign Legion, the Spanish Foreign Legion and the Polish Legions. Members of these modern legions are often called légionnaires, the French term for legionary.