Lehigh Valley International Airport (IATA: ABE, ICAO: KABE, FAA LID: ABE) (formerly Allentown–Bethlehem–Easton International Airport) is a public airport in Hanover Township, Lehigh County, Pennsylvania. Parts of it are in Catasauqua and Allen Township, Northampton County, Pennsylvania. It is 3 miles (5 km) northeast of Allentown, in the Lehigh Valley region of Pennsylvania, the third most-populous metropolitan region in the state (after Philadelphia and Pittsburgh).

It is owned and operated by the Lehigh–Northampton Airport Authority. The number of people using the airport fell by 24.3% from 723,556 in FY2012 to 582,000 in FY2014[4] and the airport has seen steep declines in passenger usage since the early 2000s when annual traffic twice hit levels above 1,000,000 passengers.[5] For 2012 the FAA has categorized ABE airport as a "nonhub"[6] but in previous years the FAA categorized the airport as a "small hub".

Lehigh Valley International Airport opened in 1929 and is one of the very few in the nation that serves its community from its original location. Scheduled airline flights began on September 16, 1935 by United Airlines Boeing 247s. The airport hangar served as the passenger terminal; the first terminal building at the airport was built in 1938 as a Works Projects Administration (WPA) project.

During World War II the U. S. Navy V-5 flight training program was conducted at the airport in conjunction with ground training held at Muhlenberg College. In addition, Headquarters of Group 312 of the Civil Air Patrol was at Allentown–Bethlehem Airport. One of its activities was to provide a courier service for cargo defense plants. Allentown CAP pilots also patrolled the Atlantic coastline, and was active in recruiting young men for the air cadet program of the Army Air Force.

By January 1944 work on a new runway was completed and a Class A United States Weather Bureau station had been installed. About 1,000 Naval Aviation Cadets had been trained during 1943, and a large increase in the amount of civilian and military air traffic had occurred. In late July, the War Production Board approved the construction of a second story addition to the administration building. The building housed the Lehigh Aircraft Company, the weather bureau station, the Civil Aeronautic communications station, and the office and waiting room of United Air Lines. In August, the V-5 flight training program ended when the Navy decided to move all flight training to naval air bases under Navy pilots.

A new passenger terminal began construction in 1948 and was finished in 1950. Allentown–Bethlehem–Easton (ABE) airport, as it was now called, had flights on United, Trans World Airlines since 1947, and Colonial Airlines since 1949–50. DC-4s and DC-6s appeared after runway 6 was extended to 5,000 ft. TWA left in 1967, replaced by Allegheny; Colonial's successor Eastern remained until 1991. Republic DC-9 nonstop flights to Detroit started in 1986; regional partners replaced successor Northwest around 2003, as United's nonstop flights to Chicago had likewise been replaced around 2001. Delta started nonstop flights to Atlanta in 1991 and its partner took over in 2002.

Construction began on the present terminal in 1973 and the project, designed by Wallace & Watson, was completed in 1976.[7]

The most recent Terminal Renovations were done in two phases. 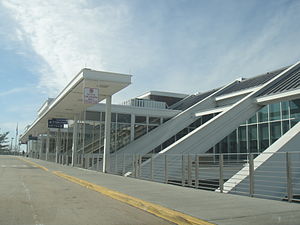