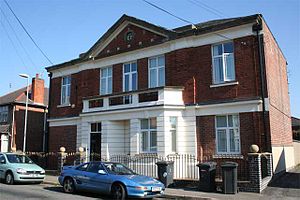 The Leicestershire Miners' Association was a trade union in the United Kingdom.

The union was affiliated to the Miners Federation of Great Britain, and in 1945 it became the Leicestershire Area of the National Union of Mineworkers (NUM). Although all but thirty of the union's members broke the 1984 Miners’ Strike, they voted against joining the Union of Democratic Mineworkers, and remained part of the NUM.