From Infogalactic: the planetary knowledge core
Jump to: navigation, search
This article is about the river in Europe. For other uses, see Leitha (disambiguation).

The Leitha (German: Leitha; Hungarian: Lajta, Lajtha, formerly Sár(-víz); Czech and Slovak: Litava) is a river in Austria and Hungary, a right tributary of the Danube.

The Lithaha River in the Carolingian Avar March was first mentioned in an 833 deed issued by Louis the German, son of the Carolingian emperor Louis the Pious and ruler over the stem duchy of Bavaria. The Old High German name lît probably referred to a Pannonian (Illyrian) denotation for "mud", as maintained in the former Hungarian name Sár (cf. mocsár: swamp). 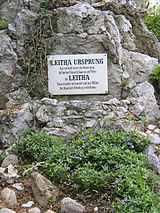 The Leitha rises in Lower Austria at the confluence of its headstream Schwarza, discharging the Schneeberg, Rax and Schneealpe ranges of the Northern Limestone Alps, with Pitten Creek. Between Ebenfurth and Leithaprodersdorf, and between Bruck an der Leitha and Gattendorf,[1] the Leitha forms part of the border between the Austrian states of Lower Austria and Burgenland. East of Nickelsdorf, the river passes into modern Hungary, where it flows into the Moson arm of the Danube west of Szigetköz Island near Mosonmagyaróvár. Important towns on its course are Wiener Neustadt, Bruck and Mosonmagyaróvár.

Large amounts of the Schwarza headstream waters are diverted to supply the Wiener Neustadt Canal and the drinking water supply of Vienna. Furthermore, several canals diverge from the Leitha, feeding spinning companies in the past, today small hydroelectric power plants. Between Seibersdorf and Hof am Leithaberge, most of the water in the Leitha is removed for this purpose. From there on, the Leitha usually runs dry, unless its flow further upstream is abnormally high. Downriver from Katzelsdorf the river bed is almost completely dry as well. 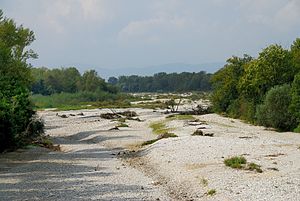 After the Hungarian conquest of the Carpathian Basin in the late 9th century, the Magyar horsemen dared further invasions into the adjacent West Frankish lands, until they were finally defeated by King Otto I in the 955 Battle of Lechfeld. Thereafter the forces of the Bavarian duke Henry the Wrangler gradually re-conquered the lands beyond the Vienna Woods up to the Leitha River, where about 976 the March of Austria (Ostarrîchi) was established under the Babenberg margrave Leopold I.

Around the turn of the 2nd millennium, the Hungarian frontier (Gyepű) ran along the Leitha shore, from 1156 onwards it formed the eastern border of the Duchy of Austria with fortresses erected at Wiener Neustadt, Bruck and Hainburg. The last Babenberg duke Frederick II of Austria was killed in the 1246 Battle of the Leitha River against King Béla IV of Hungary. The course of the border was confirmed in a 1411 deed issued by King Sigismund, when his daughter Elizabeth married the Habsburg duke Albert II of Austria. 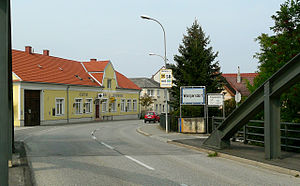 The placenames Cisleithania, Transleithania and Lajtabánság are all derived from the Leitha River. After the Austro-Hungarian Compromise of 1867, which created the Dual Monarchy, Transleithanien ("beyond the Leitha") was the Viennese colloquial word for the region beyond the Leitha (meaning Hungary or the Kingdom of Hungary), while Cisleithanien ("on this side of the Leitha") denoted the Austrian lands. These names reflected the Viennese and Austrian perspectives towards the rest of the Empire, because Vienna lay on 'this' side, and the other half, Hungary, lay on 'that' side.[2] Nevertheless the Leitha did not form the entire border between the two: for instance Galicia and Bukovina, which were part of Cisleithania, were north-east of Hungary. Likewise, the Morava River formed the border between Cisleithanian Moravia and the Transleithanian lands of present-day Slovakia (Upper Hungary).

Upon the dissolution of Austria-Hungary after World War I, the 1920 Treaty of Trianon adjudicated the West Hungarian territory of the proclaimed Lajtabánság (Leitha Banat) to the Republic of Austria (as Burgenland), whereby the course of the river became an inner Austrian border.