The Leland Trail, a 28 miles (45.1 km) footpath in Somerset, England. It runs from King Alfred's Tower in Penselwood to Ham Hill Country Park.[1]

The path was established by creating rights of way via tracks and lanes. It is named after John Leland who visited South Somerset during the years 1535 - 1543.[1] In his role as royal librarian, his journeys and tasks during that period were mapped out for him by King Henry VIII. His job was to reveal to the King all reference to "antiquities" and possessions of the local churches and priories.[2] The exact route taken by John Leland over much of South Somerset may never be known but what has remained of the records of the time now form the basis of the trail. 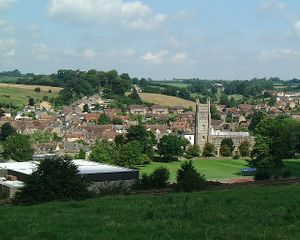 Bruton taken from the Dovecote

Typical all day walks allow the track to be traversed in manageable stages. Traditionally it is broken down into seven smaller parts.[3]

The rest of the trail goes from Queen Camel to Ilchester covers mainly level ground and takes about 2 hours for a distance of 5 miles (8.0 km) miles. Montacute is the next "port of call" en route, the slightly more difficult terrain will need well over two hours to complete the next 4 miles (6.4 km). Ham Hill, which is the end of the trail takes another hour. 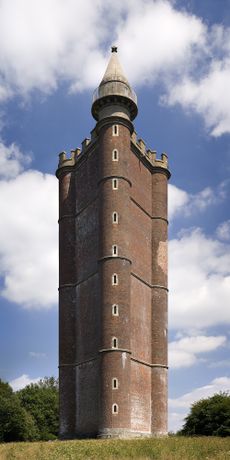 The forest of Penselwood. Bruton has its packhorse bridge, dovecote and famous twin-towered church. Near Castle Cary is Cadbury Castle whose summit offers a spectacular panorama of the South Somerset countryside. The busy military airfield at Yeovilton, is also home to the Fleet Air Arm Museum. Montacute House is also close to the site of the former Cluniac Montacute Priory. At Ham Hill Country Park you can view Exmoor, the Quantock Hills, and the Bristol Channel. Looking east is the trails starting point, Alfred's Tower.

The Leland Trail links with the Monarch's Way at Ilchester and the Liberty Trail and the River Parrett Trail at Ham Hill.[4]