How Long Is the Coast of Britain? Statistical Self-Similarity and Fractional Dimension

From Infogalactic: the planetary knowledge core
(Redirected from Length of coast)
Jump to: navigation, search
For the geography and a figure for the length, see Coastline of the United Kingdom. 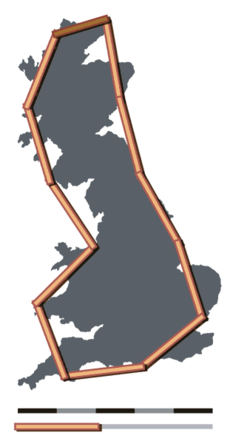 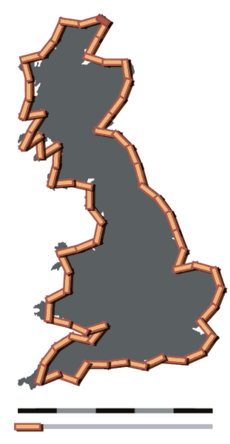 "How Long Is the Coast of Britain? Statistical Self-Similarity and Fractional Dimension" is a paper by mathematician Benoît Mandelbrot, first published in Science in 1967.[1] In this paper Mandelbrot discusses self-similar curves that have Hausdorff dimension between 1 and 2. These curves are examples of fractals, although Mandelbrot does not use this term in the paper, as he did not coin it until 1975. The paper is one of Mandelbrot's first publications on the topic of fractals.[2]

This discussion implies that it is meaningless to talk about the length of a coastline; some other means of quantifying coastlines are needed. Mandelbrot discusses an empirical law discovered by Lewis Fry Richardson, who observed that the measured length L(G) of various geographic borders was a function of the measurement scale G. Collecting data from several different examples, Richardson conjectured that L(G) could be closely approximated by a function of the form

Mandelbrot then describes various mathematical curves, related to the Koch snowflake, which are defined in such a way that they are strictly self-similar. Mandelbrot shows how to calculate the Hausdorff dimension of each of these curves, each of which has a dimension D between 1 and 2 (he also mentions but does not give a construction for the space-filling Peano curve, which has a dimension exactly 2). He notes that the approximation of these curves with segments of length G have lengths of the form

Near the end of the paper Mandelbrot briefly discusses how one might approach the study of fractal-like objects in nature that look random rather than regular. For this he defines statistically self-similar figures and says that these are encountered in nature.

The paper is important because it is a "turning point" in Mandelbrot's early thinking on fractals.[3] It is an example of the linking of mathematical objects with natural forms that was a theme of much of his later work.