From Infogalactic: the planetary knowledge core
Jump to: navigation, search
Not to be confused with Lenoir, North Carolina.

Lenoir County is a county located in the U.S. state of North Carolina. As of the 2010 census, the population was 59,495.[1] Its county seat is Kinston,[2] located on the Neuse River, across which the county has its territory.

The county was formed by European Americans in 1791 from the southern part of Dobbs County. It was named for William Lenoir (1751-1839), an officer in the American Revolutionary War who took part in the Battle of Kings Mountain.[3] He was a prominent political leader; when the county was established, he was serving as Speaker of the North Carolina Senate.

Lenoir County is a member of the regional Eastern Carolina Council of Governments.

Lenoir County is served by the Kinston Regional Jetport (IATA: ISO, ICAO: KISO) with service to Orlando, Florida. Raleigh-Durham International Airport is the closest major airport with service to more than 45 domestic and international destinations.

The main highway in the county is US 70, which offers access to the North Carolina coast and I-95. Other highways that run through the county include US 258, NC 11, NC 58, NC 903 and NC 55. Interstate 95 is the closest Interstate Highway to the county, located 50 miles west in Selma.

The county is served by Greyhound with a location in Kinston.

Lenoir County is home to the Lenoir Memorial Hospital, a 261-bed non-proft facility located in Kinston. 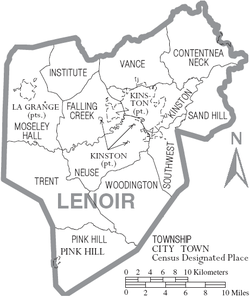