From Infogalactic: the planetary knowledge core
Jump to: navigation, search
For other uses, see Lentini (disambiguation). 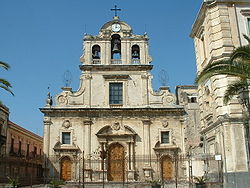 The ancient city was founded as Leontini by colonists from Naxos in 729 BC, itself a Chalcidian colony established five years earlier.

It is virtually the only Greek settlement in Sicily not located on the coast, being some 6 miles inland. The site, originally held by the Sicels, was seized by the Greeks owing to its command of the fertile plain to the north. The city was reduced to subject status in 494 BC by Hippocrates of Gela,[1] who made his ally Aenesidemus its tyrant.[2] In 476 BC, Hieron of Syracuse moved the inhabitants from Catana and Naxos to Leontini.[1]

Later on, the city of Leontini regained its independence.[1] However, as part of the inhabitants' efforts to retain that independence, they sought the intervention of Athens. It was mainly the eloquence of Gorgias of Leontini which led to the abortive Athenian expedition of 427 BC.[1]

In 422 BC, Syracuse supported the oligarchs against the people and received the oligarchs as citizens, the city of Leontini itself being forsaken. This led to renewed Athenian intervention, at first mainly diplomatic; but the exiles of Leontini joined the envoys of Segesta, in persuading Athens to undertake the great Sicilian Expedition of 415 BC.

After the failure of the Expedition, Leontini became subject to Syracuse once more.[3] The city's independence was guaranteed by the treaty of 405 BC between Dionysius and the Carthaginians, but lost again shortly after. The city was finally stormed by Marcus Claudius Marcellus in 214 BC.

By Roman times it seems to have been of little importance.[1] It was destroyed by the Saracens in 847 AD,[1] and almost totally ruined by the earthquake of 1693.[1] From the earthquake to about the middle of the 20th century, Lentini was regarded by travel writers as a malarial stop-over to Syracuse of minor historical importance.[4]

The ancient city is described by Polybius as lying in a valley between two hills, and facing north.[3] On the western side of this valley ran a river with a row of houses on its western bank under the hill. At each end was a gate, the northern gate leading to the plain, the southern, at the upper end, leading to Syracuse. There was an acropolis on each side of the valley, lying between precipitous hills with flat tops, over which buildings had extended. The eastern hill still has the remains of a strongly fortified medieval castle, in which some writers are inclined (though wrongly) to recognize portions of Greek masonry.

Excavations were made in 1899 in one of the ravines in a Sicel necropolis of the third period—explorations in the various Greek cemeteries resulted in the discovery of some fine bronzes, notably a fine bronze lebes, now in a Berlin museum.

Lentini's economy is mostly based on agriculture, with also a rather flourishing woodcraft and handicraft production.