Leon County is a county located in the U.S. state of Florida. As of the 2010 census, the population was 275,487.[1] The county seat is Tallahassee,[2] which also serves as the state capital. The county is named after the Spanish explorer Juan Ponce de León.

Originally part of Escambia and later Gadsden County, Leon County was created in 1824.[4] It was named for Juan Ponce de León, the Spanish explorer who was the first European to reach Florida.[5] During the 1850s - 1860s, Leon County was a "cotton kingdom" and ranked 5th out of all of Florida and Georgia counties in the production of cotton from the 20 major plantations. Unlike all other Confederate capitols east of the Mississippi River in the American Civil War, Tallahassee was never captured by the Union forces, and no Union Soldiers set foot in Leon County until Reconstruction. 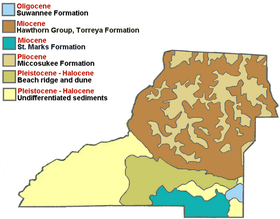 Leon County sits atop basement rock composed of basalts of the Triassic and Jurassic from ~251—145 million years ago interlayered with Mesozoic sedimentary rocks. The layers above the basement are carbonate rock created from dying foraminifera, bryozoa, mollusks, and corals from as early as the Paleocene, a period of ~66—55.8 Ma.[8]

During the Eocene (~55.8—33.9 Ma) and Oligocene (~33.9—23 Ma), the Appalachian Mountains began to uplift and the erosion rate increased enough to fill the Gulf Trough with quartz sands, silts, and clays via rivers and streams. The first sedimentation layer in Leon County is the Oligocene Suwannee Limestone in the southeastern part of the county as stated by the United States Geological Survey and Florida Geological Survey.[9]

The Early Miocene (~23.03—15.7 Ma) sedimentation in Leon County is Hawthorn Group, Torreya Formation and St. Marks Formation and found in the northern two-thirds of the county.

The Pliocene (~5.332—2.588 Ma) is represented by the Miccosukee Formation scattered within the Torreya Formation.

Sediments were laid down from the Pleistocene epoch (~2.588 million—12 000 years ago) through Holocene epoch (~12,000—present) and are designated Beach ridge and trail and undifferentiated sediments.

During the Pleistocene, what would be Leon County emerged and submerged with each glacial and interglacial period. Interglacials created the topography of Leon as it is known now.

The adult citizens of Leon County enjoy the highest level of education in the state of Florida followed by Alachua County with a total of 67.8%. 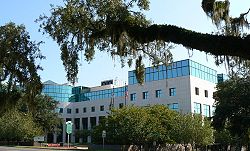 Leon County is a traditional blue county and has usually voted Democratic. This is likely due to Florida State University and Florida A&M University in Tallahassee, as well as the concentration of government employees in the capital city.

The proponents of consolidation have stated that the new jurisdiction would attract business by its very size. Merging of governments would cut government waste, duplication of services, etc. However Professor Richard Feiock states that no discernible relationship exists between consolidation and the local economy.[19]

All of Leon County is located in the 2nd Congressional District, which is currently represented by Gwen Graham (D). map.

All of Leon County is represented by Bill Montford (D) District 3 in the Florida Senate.

Public schools in Leon County are administered and under the operation of the Leon County School District. LCS is operated by a superintendent, 5 board members, and 1 Student Representative. There are:

Leon County has 7 branches that serve the area.