Leonard Henry Courtney, 1st Baron Courtney of Penwith PC (6 July 1832 – 11 May 1918) was a British politician, academic and man of letters. He was a member of William Ewart Gladstone's second administration from 1880 to 1883 and served as Chairman of Ways and Means (Deputy Speaker of the House of Commons) between 1886 and 1893.

Courtney was born at Penzance, Cornwall, the eldest son of John Sampson Courtney, a banker, and Sarah, daughter of John Mortimer.[1] Two of his brothers, John Mortimer Courtney (1838–1920), and William Prideaux Courtney (1845–1913), also attained public distinction, the former in the government service in Canada (from 1869, retiring in 1906), rising to be deputy-minister of finance, and the latter in the British civil service (1865–1892), and as a prominent man of letters and bibliographer. He was educated at St John's College, Cambridge, where he was Second Wrangler and first Smith's prizeman, and elected a fellow of his college.[2] He was called to the Bar at Lincoln's Inn in 1858. From 1872 to 1875 he was professor of political economy at University College, London.[3] 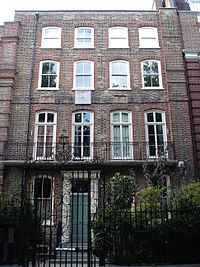 15 Cheyne Walk, Chelsea, London, where Courtney was living at the time of his death

In December 1876, after a previous unsuccessful attempt, Courtney was elected to parliament for Liskeard as a Liberal. He continued to represent the borough, and Bodmin into which it was merged by the Reform Act of 1885, until 1900, when his attitude towards the South African War (he and his wife Catherine were one of the foremost of the so-called Pro-Boer Party) compelled his retirement.[3]

Until 1885, he was a devoted adherent of William Ewart Gladstone, particularly in finance and foreign affairs. In 1880 he was appointed Under-Secretary of State for the Home Department, in 1881 Under-Secretary of State for the Colonies and in 1882 Financial Secretary to the Treasury. He was known as a stubborn fighter for principle, and after finding that the government's Reform Bill in 1884 contained no recognition of the scheme for proportional representation, to which he was deeply committed, he resigned office. He refused to support Gladstone's Home Rule Bill in 1886 and was one of those who chiefly contributed to its rejection, whose reputation for unbending integrity and intellectual eminence gave solidity to the Liberal Unionist party.[3]

In 1886, Courtney was elected Chairman of Ways and Means (Deputy Speaker of the House of Commons) and was sworn of the Privy Council in 1889. His efficiency in this office seemed to mark him out for the speakership after the 1895 general election. A Liberal Unionist, however, could be elected only by Conservative votes, and he had made himself objectionable to a large section of the Conservative Party by his independent attitude on various questions, on which his liberalism outweighed his party loyalty. He, would in any case, have been incapacitated by an affection of the eyesight, which for a while threatened to withdraw him from public life altogether.[3]

After 1895, Courtney's divergences from the Unionist party on questions other than Irish politics became gradually more marked. He became known in the House of Commons principally for his candid criticism of the measures introduced by his nominal leaders, and he was rather to be ranked among the Opposition than as a Ministerialist. When the crisis with the Transvaal came in 1899, Courtney's views, which remained substantially what they were when he supported the settlement after Majuba in 1881, had plainly become incompatible with his position even as a nominal follower of Lord Salisbury and Joseph Chamberlain. [3] He led the work of the South African Conciliation Committee which brought the sufferings of the Boers to the attention of British people.[4]

He gradually reverted to formal membership of the Liberal party and, in January 1906, unsuccessfully contested Edinburgh West as a supporter of Sir Henry Campbell-Bannerman at the general election. Among the birthday honours of 1906 he was elevated to the peerage as Baron Courtney of Penwith, in the County of Cornwall.[5]

Courtney was a prominent supporter of the women's movement through the influence of his wife and sister-in-law. In his earlier years, he was a regular contributor to The Times, and he wrote numerous essays in the principal reviews on political and economic subjects. In 1901 he published a book on The Working Constitution of the United Kingdom. He was President of the Royal Statistical Society, 1897-9.[6] He was a great friend of the artist Norman Garstin. 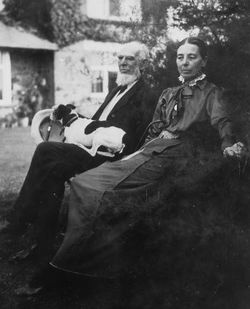 Lord Courtney and his wife Catherine in 1916

Courtney married Catherine Potter, daughter of Richard Potter and an elder sister of Beatrice Webb, in 1883. They had no children.