Leonard Wood (October 9, 1860 – August 7, 1927) was the Chief of Staff of the United States Army, Military Governor of Cuba, and Governor General of the Philippines. Early in his military career, he received the Medal of Honor. Wood also holds officer service #2 in the Regular Army (John Pershing holds officer service #1). He became a prominent Republican Party leader and a candidate for the 1920 presidential nomination. He served as civilian Governor General in the Philippines in the 1920s, where he fought with local leaders.

Born in Winchester, New Hampshire to Charles Jewett Wood (1829–1880) and Caroline E. (Hagar) Wood (1836–1910), he attended Pierce Academy in Middleborough, Massachusetts and Harvard Medical School, earning an M.D. degree in 1884 as an intern at Boston City Hospital. Leonard Wood was of English descent, and was descended from four Mayflower passengers including William White, Francis Cooke, Stephen Hopkins and Richard Warren; all four of whom signed the Mayflower Compact.[2] He was married to Louise Adriana Condit Smith (1869–1943), of Washington, on November 18, 1890.[1]

He took a position as an Army contract surgeon in January 1886, and was stationed with the 4th Cavalry at Fort Huachuca, Arizona. Wood participated in the last campaign against Geronimo in 1886, and was awarded the Medal of Honor for carrying dispatches 100 miles through hostile territory and for commanding a detachment of the 8th Infantry (whose officers had been lost) in hand-to-hand combat against the Apache. He received the rank of captain in 1891.

While stationed at Fort McPherson in Atlanta, in 1893, Wood enrolled in graduate school at Georgia Tech, then known as the Georgia School of Technology, and organized the school's 1893 football team. Wood was the team's coach and played left guard, leading Georgia Tech to a 2–1–1 record, including a 28–6 victory over the University of Georgia.[3] He was awarded an LL.D. by Harvard in 1899.[1]

Wood was personal physician to Presidents Grover Cleveland and William McKinley through 1898. It was during this period he developed a friendship with Theodore Roosevelt, then Assistant Secretary of the Navy. At the outbreak of the Spanish–American War, Wood, with Roosevelt, organized the 1st Volunteer Cavalry regiment, popularly known as the Rough Riders. Wood commanded the regiment in a successful engagement known as the Battle of Las Guasimas. When the brigade commander, Samuel B. M. Young, became ill, Wood received a field promotion to brigadier general of volunteers and assumed command of the 2nd Brigade, Cavalry Division, Fifth Army Corps (which included the Rough Riders) and led the brigade to a famous victory at Kettle Hill and San Juan Heights.

General Joe Wheeler with the command group of the 1st US Volunteer Regiment, the "Rough Riders" in Tampa—Col Wood is 2nd from right with Lt Col Roosevelt far right.

After San Juan, Wood led the 2nd Cavalry Brigade for the rest of the war; he stayed in Cuba after the war and was appointed the Military Governor of Santiago in 1898, and of Cuba from 1899–1902. In that capacity, he relied on his medical experience to institute improvements to the medical and sanitary conditions in Cuba. He introduced numerous reforms similar to those of the Progressive Movement in the U.S.[4] He was promoted to brigadier general of regulars shortly before moving to his next assignment.

In 1902, he proceeded to the Philippines, where he commanded the Philippines Division and later became commander of the Department of the East. He was promoted to major general in 1903 despite significant opposition,[5] and served as governor of Moro province, a stronghold of Muslim rebellion, from 1903 to 1906. He received criticism for his handling of the battle at First Battle of Bud Dajo.

Wood had known Theodore Roosevelt well before the Spanish–American War. Wood was named Army Chief of Staff in 1910 by President Taft, whom he had met while both were in the Philippines; he remains the only medical officer to have ever held that position. As Chief of Staff, Wood implemented several programs, among which were the forerunner of the Reserve Officer Training Corps (ROTC) program, and the Preparedness Movement, a campaign for universal military training and wartime conscription. The Preparedness Movement plan was scrapped in favor of the Selective Service System, shortly before World War I. He developed the Mobile Army, thus laying the groundwork for American success in World War I. 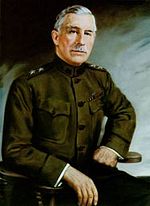 In 1914, Wood was replaced as Chief of Staff by William Wotherspoon. Wood was a strong advocate of the Preparedness Movement, led by Republicans, which alienated him from President Wilson. In 1915, he published The Military Obligation of Citizenship.

On July 4, 1916 Wood was elected as an honorary member of the Rhode Island Society of the Cincinnati.[6]

With the US entry into World War I in April 1917, Wood was recommended by Republicans, in particular Henry Cabot Lodge, to be the U.S. field commander; however, War Secretary Newton Baker instead appointed John J. Pershing, amid much controversy. During the war, Wood was, instead, put in charge of the training of the 10th and 89th Divisions, both at Camp Funston.

Wood was an unsuccessful candidate for the Republican presidential nomination in the election of 1920. He was urged into running by the family and supporters of his old friend Theodore Roosevelt, who himself had been considering another campaign before his illness and death in 1919. He won the New Hampshire primary that year but lost at the convention.

Among the reasons that he did not become the candidate were several strong rivals for the nomination, his political inexperience, and the strong support he gave to the Red Scare, Attorney General A. Mitchell Palmer's campaign against Bolsheviks and anarchists.[citation needed] After the major candidates deadlocked, the nomination went to U.S. Senator Warren G. Harding of Ohio.

Governor General of the Philippines

He retired from the U.S. Army in 1921, after which he was appointed as Governor General of the Philippines later that year.[7]

His tenure as was characterized with marked tension between him and key Filipino officials. In his first year, Wood vetoed 16 measures passed by the Philippine legislature, an act denounced by critics as a "misuse of the veto power," citing that his predecessor, Francis Burton Harrison, only vetoed 5 measures.[8]

The tension became more heightened by 1923, precipitated by the issue regarding Wood's interference in the case of Ray Conley, a Manila Police detective who was accused of immorality and misconduct in office. Interior Secretary Jose P. Laurel sought for Conley's removal from service due to probable cause but Wood ordered Laurel that Conley be reinstated to the police force. In protest, Laurel tendered his resignation.[9] The Filipino members of the Wood cabinet, including the Council of State, tendered their resignations as well in support of Laurel and in protest of Wood's handling of government affairs in the country. These events would become known as the "Cabinet Crisis of 1923," effectively straining relations between the U.S. colonial government under Wood and the Filipino leaders that would last until his death in 1927.[10]

Wood died in Boston, Massachusetts after undergoing surgery for a recurrent brain tumor. He had initially been diagnosed in 1910 with a benign meningioma brought on by exposure to experimental weapons refuse.[citation needed] This was resected by Harvey Cushing at that time, and Wood made a full recovery until the tumor later recurred. The successful removal of Wood's brain tumor represented an important milestone, indicating to the public the advances that had been made in the nascent field of neurosurgery, and extending Wood's life by almost two decades.[11]

He is buried in Arlington National Cemetery.[12][13] His brain is held at the Yale University School of Medicine as part of an historic collection of Harvey Cushing's patients' preserved brains.

One of the US Navy's Harris-class attack transports, the USS Leonard Wood (APA-12), bears Gen. Wood's name. Numerous streets are named after Wood, including roads in Baguio City and Zamboanga City, Philippines A Public Elementary School in Barangay Jagobiao, Mandaue City, Philippines (inside Eversley Childs Sanitarium compound) was also named after him.

For a brief period of time, Guadalupe County, New Mexico, was named after Wood. After a few years it was changed back to Guadalupe.

He is portrayed favorably in the 1997 miniseries Rough Riders by actor and retired United States Marine Dale Dye, but portrayed in a less favorable light by Mark Twain and others for his part in the First Battle of Bud Dajo in 1906.

Voluntarily carried dispatches through a region inhabited by hostile Indians, making a journey of 70 miles in one night and walking 30 miles the next day. Also for several weeks, while in close pursuit of Geronimo's band and constantly expecting an encounter, commanded a detachment of Infantry, which was then without an officer, and to the command of which he was assigned upon his own request.