Leovegildo Lins da Gama Júnior (born 29 June 1954), known simply as Júnior or Léo Júnior, is a Brazilian former professional footballer who played as a left back or midfielder.[1]

He was named by Pelé as one of the top 125 greatest living footballers in March 2004.[2] Junior now works as a television pundit for Rede Globo. 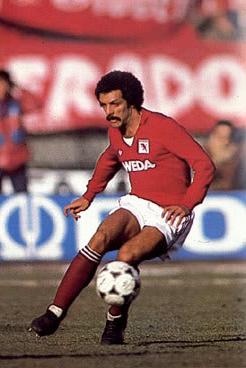 Júnior in action with Torino

On 12 June 1984 he was bought by Torino, for a fee of two million dollars. Júnior asked and obtained a guarantee to play as a midfielder rather than a full-back, because he considered the former role less stressful, so to extend the life of his career. Although he was now thirty years old, after some initial difficulties, he succeeded in integrating in the formation coached by Luigi Radice, becoming the leader of the midfield. During his first year in Italy was the victim of two incidents of racism: in Milan he was repeatedly insulted and spat upon as he left the stadium with his mother and father and in Turin, on the occasion of the derby, Juventus fans exhibited offensive banners on the colour of his skin. The Torino supporters responded promptly with another banner: "Better negro than Juventino". At the end of the season, finished second behind Verona, he was awarded Serie A's player of the year.[4]

During his time with "Toro" he was also given the affectionate nickname of "papà Júnior", due to his elder appearance. He remained in Turin until 1987, when he had a fallout with the manager Radice. The coach believed the performance of the Brazilian lower than that of the first season, while Júnior was particularly annoyed for being substituted during a UEFA Cup tie against HNK Hajduk Split, which culminated with the elimination of the team.

He was known for his technique and teamwork as well as his versatility, playing at left back and on the left of midfield for Brazil due to his two footedness (despite being naturally right footed) whilst often playing midfielder at club level.