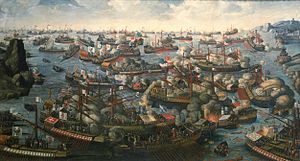 A painting of the battle.

Lepanto is a famous poem by G.K. Chesterton about the Battle of Lepanto. It is a rousing martial ballad which tells of the defeat of the Ottoman fleet of Ali Pasha by the Christian crusader, Don John of Austria. The poem was written in 1911 and its stirring verses helped inspire soldiers such as John Buchan during World War I.[1]

Literary critic, Joseph John Reilly described the poem as perfect, "Here Chesterton's vision of life is fulfilled and justified; here the mighty virtues of his world are made glorious anew in the immortal heroism of common men. ... In Lepanto, Chesterton reveals all his poetic gifts at their best: rhetoric in the high sense which De Quincey defined it; music almost as rich as Tennyson's, varied by a chant in which the tread of marching men lives again; color varied and brilliant with the splendor of the East."

Reilly praises the way that Chesterton artistically relieves the martial vigour with contrasting lines which are soft and quiet. For example, lines 5–7 of the following passage are identified as achieving this effect:[2]

Dim drums throbbing, in the hills half heard,
Where only on a nameless throne a crownless prince has stirred,
Where, risen from a doubtful seat and half attainted stall,
The last knight of Europe takes weapons from the wall,
The last and lingering troubadour to whom the bird has sung,
That once went singing southward when all the world was young,
In that enormous silence, tiny and unafraid,
Comes up along a winding road the noise of the Crusade.

This subtle restraint is especially praised in the way that the poem ends with a literary reference to Cervantes, who fought in the battle. "Don John did more than save western Europe: ... he made it possible for men unborn to dwell in freedom and to share the kindly and immortal laughter of Don Quixote."

Cervantes on his galley sets the sword back in the sheath
(Don John of Austria rides homeward with a wreath.)
And he sees across a weary land a straggling road in Spain,
Up which a lean and foolish knight forever rides in vain,
And he smiles, but not as Sultans smile, and settles back the blade...
(But Don John of Austria rides home from the Crusade.)

"Lepanto" was published during World War I, a context which made the victory of Christian Europe over its Turkish enemy readily acceptable in Chesterton's straightforward terms of right triumphing over wrong in vividly blood-stained terms.[3] Ironically it is Mahound, not Don John or Cervantes, who assesses enemy motivation and values: "It is he that saith not 'Kismet'; it is he that knows not Fate".