Lepidodendrales (from Gr. "scale tree") were primitive, vascular, arborescent (tree-like) plants related to the lycopsids (club mosses). They thrived during the Carboniferous period, and some reached heights of over 30 meters, with trunks often more than one meter in diameter. Sometimes called "giant club mosses", they are in fact more closely related to quillworts than to club mosses.

Lepidodendrales had tall, thick trunks that rarely branched and were topped with a crown of bifurcating branches bearing clusters of leaves. These leaves were long and narrow, similar to large blades of grass, and were spirally-arranged. The vascular system of the erect trunk was unusual in that it switched its morphological development as the plant grew. The young trunk began as a protostele in which the outer xylem matured first (exarch), but the later and higher portion of the trunk developed as an ectophloic siphonostele in which the xylem was flanked by phloem tissue on both its inner and outer side.[1]

The closely packed diamond-shaped leaf scars left on the trunk and stems as the plant grew provide some of the most interesting and common fossils in Carboniferous shales and accompanying coal deposits. These fossils look much like tire tracks or alligator skin. 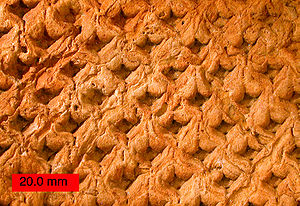 External mold of Lepidodendron from the Upper Carboniferous of Ohio.

The scars, or leaf cushions, were composed of green photosynthetic tissue, evidenced by the cuticle covering and being dotted with stomata, microscopic pores through which carbon dioxide from the air diffuses into plants. Likewise, the trunks of Lepidodendrons would have been green, unlike modern trees which have scaly, non-photosynthetic brown or gray bark.

The architecture of the lepidodendrales has been called "cheap".[2] The trunks produced little wood. Most structural support came from a thick, bark-like region. This region remained around the trunk as a rigid layer that did not flake off like that of most modern trees. As the tree grew, the leaf cushions expanded to accommodate the increasing width of the trunk.

The branches of these plants ended in cone-like structures. They did not produce seeds like many modern plants. Instead, it reproduced by means of spores. It is estimated that these plants grew rapidly and lived 10–15 years. This is indeed plausible, since Cottonwoods too have soft wood and grow fast- they have been known to reach 100 feet tall in fifteen years sometimes. Some species were probably monocarpic, meaning they reproduced only once toward the end of their life cycle.[2]

Lepidodendrales likely lived in the wettest parts of the coal swamps that existed during the Carboniferous period. They grew in dense stands, likely having as many as 1000 to 2000 individuals per hectare. This would have been possible because they did not branch until fully grown, and would have spent much of their lives as unbranched poles topped and surrounded by long grass/needlelike leaves. In its juvenile stages, the trunk was supported by grass-like leaves that grew straight out of the trunk.

The lepidodendrales comprises three main genera, Lepidodendron, Lepidophloios, and Sigillaria, distinguished on the basis of the ratio of scale width to height - they are otherwise identical. In addition, many "organ taxa" have been identified to the lepidodendrales: each root (Stigmaria), leaf and cone (Lepidostrobus) was originally given a different genus and species name before it could be shown that they belonged to the same organism.