From Infogalactic: the planetary knowledge core
Jump to: navigation, search
This article is about the creature in Irish folklore. For other uses, see Leprechaun (disambiguation).

A leprechaun (Irish: leipreachán) is a type of fairy in Irish folklore. It is usually depicted as a little bearded man, wearing a coat and hat, who partakes in mischief. They are solitary creatures who spend their time making and mending shoes and have a hidden pot of gold at the end of the rainbow. If captured by a human, the leprechaun has the magical power to grant three wishes in exchange for their freedom. Like other Irish fairies, leprechauns may be derived from the Tuatha Dé Danann.[1] Leprechaun-like creatures rarely appear in Irish mythology and only became prominent in later folklore.

Modern depictions of leprechauns are largely based on derogatory 19th century caricatures and stereotypes of the Irish.[2]

The name leprechaun is derived from the Irish word leipreachán, defined by Patrick Dinneen as "a pigmy, a sprite, or leprechaun". The further derivation is less certain; according to most sources, the word is thought to be a corruption of Middle Irish luchrupán,[3] from the Old Irish luchorpán, a compound of the roots lú (small) and corp (body).[4][5] The root corp, which was borrowed from the Latin corpus, attests to the early influence of Ecclesiastical Latin on the Irish language.[6] The alternative spelling leithbrágan stems from a folk etymology deriving the word from leith (half) and bróg (brogue), because of the frequent portrayal of the leprechaun as working on a single shoe.[7]

Alternative spellings in English have included lubrican, leprehaun, and lepreehawn. Some modern Irish books use the spelling lioprachán.[4] The first recorded instance of the word in the English language was in Dekker's comedy The Honest Whore, Part 2 (1604): "As for your Irish lubrican, that spirit / Whom by preposterous charms thy lust hath rais'd / In a wrong circle."[4] 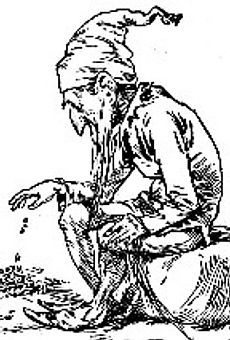 A leprechaun counts his gold in this engraving c. 1900

The earliest known reference to the leprechaun appears in the medieval tale known as the Echtra Fergus mac Léti (Adventure of Fergus son of Léti).[8] The text contains an episode in which Fergus mac Léti, King of Ulster, falls asleep on the beach and wakes to find himself being dragged into the sea by three lúchorpáin. He captures his abductors, who grant him three wishes in exchange for release.[9][10]

The leprechaun is said to be a solitary creature, whose principal occupation is making and mending shoes, and who enjoys practical jokes. According to William Butler Yeats, the great wealth of these fairies comes from the "treasure-crocks, buried of old in war-time", which they have uncovered and appropriated.[11] According to David Russell McAnally the leprechaun is the son of an "evil spirit" and a "degenerate fairy" and is "not wholly good nor wholly evil".[12]

The leprechaun originally had a different appearance depending on where in Ireland he was found.[13] Prior to the 20th century, it was generally held that the leprechaun wore red, not green. Samuel Lover, writing in 1831, describes the leprechaun as,

... quite a beau in his dress, notwithstanding, for he wears a red square-cut coat, richly laced with gold, and inexpressible of the same, cocked hat, shoes and buckles.[14]

According to Yeats, the solitary fairies, like the leprechaun, wear red jackets, whereas the "trooping fairies" wear green. The leprechaun's jacket has seven rows of buttons with seven buttons to each row. On the western coast, he writes, the red jacket is covered by a frieze one, and in Ulster the creature wears a cocked hat, and when he is up to anything unusually mischievous, he leaps on to a wall and spins, balancing himself on the point of the hat with his heels in the air."[15] 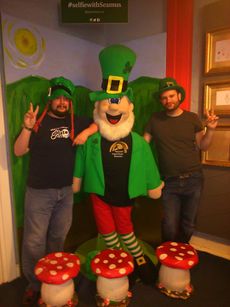 Tourists with a novelty oversized Leprechaun in Dublin

"He is about three feet high, and is dressed in a little red jacket or roundabout, with red breeches buckled at the knee, gray or black stockings, and a hat, cocked in the style of a century ago, over a little, old, withered face. Round his neck is an Elizabethan ruff, and frills of lace are at his wrists. On the wild west coast, where the Atlantic winds bring almost constant rains, he dispenses with ruff and frills and wears a frieze overcoat over his pretty red suit, so that, unless on the lookout for the cocked hat, ye might pass a Leprechawn on the road and never know it's himself that's in it at all."

This dress could vary by region, however. In McAnally's account there were differences between leprechauns or Logherymans from different regions:[16]

In a poem entitled The Lepracaun; or, Fairy Shoemaker, 18th century Irish poet William Allingham describes the appearance of the leprechaun as:

...A wrinkled, wizen'd, and bearded Elf,

Spectacles stuck on his pointed nose, Silver buckles to his hose,

The modern image of the leprechaun sitting on a toadstool, red beard, green hat, etc., are clearly more modern inventions or borrowed from other European folklore.[18]

The leprechaun is related to the clurichaun and the far darrig in that he is a solitary creature. Some writers even go as far as to substitute these second two less well-known spirits for the leprechaun in stories or tales to reach a wider audience. The clurichaun is considered by some to be merely a leprechaun on a drinking spree.[19]

In the politics of the Republic of Ireland, leprechauns have been used to refer to the twee aspects of the tourist industry in Ireland.[20][21] This can be seen from this example of John A. Costello addressing the Oireachtas in 1963: "For many years, we were afflicted with the miserable trivialities of our tourist advertising. Sometimes it descended to the lowest depths, to the caubeen and the shillelagh, not to speak of the leprechaun.[21]

Films, television cartoons and advertising have popularised a specific image of leprechauns which bears scant resemblance to anything found in the cycles of Irish folklore. Irish people can find the popularised image of a leprechaun to be little more than a series of stereotypes of the Irish.[22]