From Infogalactic: the planetary knowledge core
(Redirected from Lerida)
Jump to: navigation, search
This article is about the city. For province, see Province of Lleida.

Lleida (Catalan: [ˈʎɛjðə], locally: [ˈʎejðɛ]; Spanish: Lérida [ˈleɾiða]) is a city in the west of Catalonia, Spain, capital city of the province of Lleida.

Geographically, it is located in the Catalan Central Depression. The metro area has about 250,000 inhabitants. It is also the capital city of the Segrià comarca, as well as the largest city in the province. It had 137,387 inhabitants as of 2010[update], including the contiguous municipalities of Raimat and Sucs.

Lleida is one of the oldest towns in Catalonia, with recorded settlements dating back to the Bronze Age period. Until the Roman conquest of the Iberian Peninsula, the area served as a settlement for an Iberian people, the Ilergetes. The town became a municipality, named Ilerda, under the reign of Augustus. It was reconquered in 1149, after being many centuries under the rule of the Moors, who had conquered the town in the 8th century. In 1297, the University of Lleida was founded, becoming the third oldest in the whole of Spain. During the following centuries, the town was damaged by several wars such as the Reapers' War in the 17th century and the Spanish Civil War in the 20th century. Since then, the city has been in a constant urban, commercial and demographic growth. 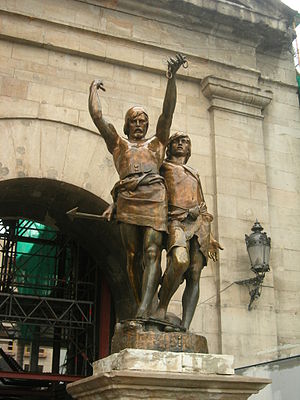 Under the Romans, the city was incorporated into the Roman province of Hispania Tarraconensis, and was a place of considerable importance, historically as well as geographically. It stood upon an eminence, on the right (west) bank of the river Sicoris (the modern Segre), the principal tributary of the Ebre, and some distance above its confluence with the Cinga (modern Cinca); thus commanding the country between those rivers, as well as the great road from Tarraco (modern Tarragona), the provincial capital, to the northwest of Spain, which here crossed the Sicoris.[3]

Its situation[4] induced the legates of Pompey in Spain to make it the key of their defense against Caesar, in the first year of the Civil War (49 BCE). Afranius and Marcus Petreius threw themselves into the place with five legions; and their siege by Caesar himself (Battle of Ilerda), as narrated in his own words, forms one of the most interesting passages of military history. The resources exhibited by the great general, in a contest where the formation of the district and the very elements of nature seemed in league with his enemies, have been frequently extolled; but no epitome can do justice to the campaign. It ended by the capitulation of Afranius and Petreius, who were conquered as much by Caesar's generosity as by his strategy.[5] In consequence of the battle, the Latin phrase Ilerdam videas is said to have been used by people who wanted to cast bad luck on someone else.

Under the Roman empire, Ilerda was a very flourishing city, and a municipium. It minted its own coins. It had a fine stone bridge over the Sicoris, (the bridge was so sturdy that its foundations support a bridge to this day). In the time of Ausonius the city had fallen into decay; but it rose again into importance in the Middle Ages.[6]

It was part of Visigothic and Muslim Hispania until it was conquered from the Moors by the Count Ramon Berenguer IV of Barcelona in 1149.

It used to be the seat of a major university, the oldest in the Crown of Aragon, until 1717, when it was moved by Philip V to the nearby town of Cervera. The University of Lleida is nowadays active again since 1991.

During the Reapers' War, Lleida was occupied by the French and rebel forces. In 1644 the city was conquered by the Spanish under D. Felipe da Silva.

Lleida served as a key defense point for Barcelona during the Spanish Civil War, and fell to the Insurgents, whose air forces bombed it extensively, in 1937 and 1938. The November 2, 1937 Legion Condor attacks against Lleida became especially infamous since they were aimed to the school known as Liceu Escolar de Lleida. 48 children and several teachers died in it that day, 300 people were killed on the November 2 bombings altogether, and the town would be bombed and sieged again in 1938, when it was conquered by Franco's forces.[7]

After some decades without any kind of population growth, it met a massive migration of Andalusians who helped the town undergo a relative demographic growth. Nowadays it is home to immigrants of 146 different nationalities.[8]

During 2007 Lleida was the year's Capital of Catalan Culture.[9]

Lleida has semi-arid climate (Köppen BSk) with Mediterranean-like precipitation patterns.[10] Winters are mild and foggy though cooler than places on the coast while summers are hot and dry. Frosts are common during winter although snowfall can occasionally fall, averaging 1 or 2 days. Precipitation is low, with an annual average of 369 millimetres (15 in) with a peak in April and May and another peak in September and October.

Lleida is divided in the following districts by the Observatori Socioeconòmic de Lleida: 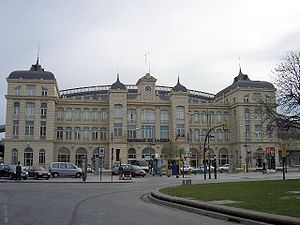 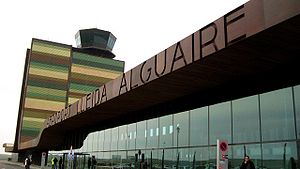 Lleida is served by the RENFE, Spanish state railway's Madrid-Barcelona high-speed rail line, serving Barcelona, Zaragoza, Calatayud, Guadalajara, and Madrid. Lleida has a new airport opened in January 2010, and a minor airfield located in Alfès. Also, the town is the western terminus of the Eix Transversal Lleida-Girona, and a railway covering the same distance (Eix Transversal Ferroviari) is currently under planning.

Lleida's only passenger railway station is Lleida Pirineus. It is served by both Renfe and Ferrocarrils de la Generalitat de Catalunya train lines. In the future a Rodalies Lleida commuter network will connect the town with its adjacent area and the main towns of its province, improving the existing network with more train frequency and newly built infrastructure. A second railway station is Pla de la Vilanoveta in an industrial area, and only used by freight trains. A future railway museum will be located in its facilities.[13] Since 2008 the bulk of public transport of the Lleida's surrounding area, mainly buses operated by several companies, is managed by Autoritat Territorial de la Mobilitat de l'Àrea de Lleida.

The urban buses, coloured yellow with blue stripes and owned by Autobusos de Lleida, include the following lines:

In addition to these, there's a tourist bus and a regular night service to nearby clubs.

Lleida has depended long time on nearby airports and had no local air transit. Lleida-Alguaire airport opened in 2010.

A tram-train system is pending approval. Using an existing but outdated passenger line, it would link Balaguer and Lleida, crossing both towns in a much-needed move towards better public transportation, both inner-city and between localities.[14][15][16]

Lleida is a traditionally Catalan-speaking city and province, with a characteristic dialect (known as Western or, more specifically, North-Western Catalan, or colloquially lleidatà). Most of the population is actively bilingual in Spanish. 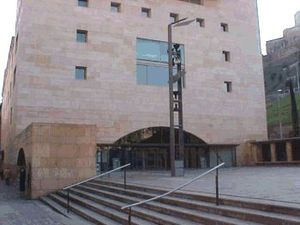 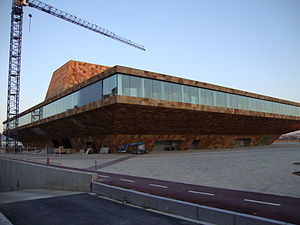 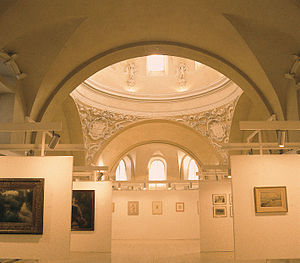 Lleida was the Capital of Catalan Culture in 2007.

There are two important music festivals in Lleida; MÚSIQUES DISPERSES Folk Festival in March,[17] and the jazz festival JAZZ TARDOR in November. Concerts are also a regular fixture of the two local feasts, Sant Anastasi in May, and Sant Miquel in September.

CaixaForum Lleida is the usual venue for film-related events and screenings. A Latin-American film festival is held yearly in the town (Mostra de Cinema Llatinoamericà de Lleida), and an animation film festival called Animac is held every May.

The Lleida Museum opened in 2008 and displays historical artefacts and works of art from various periods. The Institut d'Estudis Ilerdencs, a historically relevant building, exhibits both ancient and contemporary art. The Centre d'Art La Panera is a contemporary art institution. The Museu d'Art Jaume Morera displays art from the 20th and 21st centuries (as well as artwork by its namesake).

The city has a number of small municipal galleries, such as the Sala Municipal d'Exposicions de Sant Joan and the Sala Manel Garcia Sarramona. There are also several institutions dedicated to local artists, such as the Sala Leandre Cristòfol, containing artwork by the sculptor and painter Leandre Cristòfol (1908–1998); and the Sala Coma Estadella, dedicated to the sculptor and painter Albert Coma Estadella (1933–1991).

Private art galleries include the Espai Cavallers. The private foundation CaixaForum Lleida and the Public Library of Lleida also offer regular exhibits. The now defunct Petite Galerie was an innovative and influential gallery in the 1970s.

Traditional celebrations include the main annual town festivity: Festa Major; Fira de Sant Miquel and L’Aplec del Caragol (escargot-eating festival, the biggest in the world of this sort, held at the Camps Elisis since 1980).

The latter is a gastronomical festivity focused on escargot cooking and is celebrated yearly at the end of May. "L'Aplec" gathers thousands of people around the table to taste the most traditional dishes from Lleida.

Due to its strong popularity, it was declared a traditional festivity of national interest in 2002 by the Generalitat of Catalonia and two years latter it was also declared as such by the Spanish Government.

The main traditional celebrations in Lleida are chaired by the twelve emblematic "Gegants de la Paeria" (Giants of the Town Hall), the two oldest made in 1840. 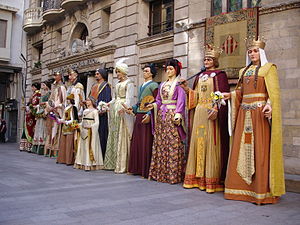 The Giants of Lleida in front of the Paeria

Lleida's has a bar and clubbing area, informally known as Els Vins. The oldest part of the quarter, known as Els Vins Vells, has been largely replaced by Els Vins Nous, an architecturally newer and more upscale area. Most big clubs in Lleida are located outside the town and are not easily accessible without a car, though on Saturday nights there is a bus.[citation needed] 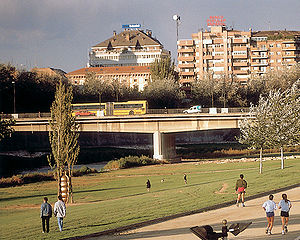 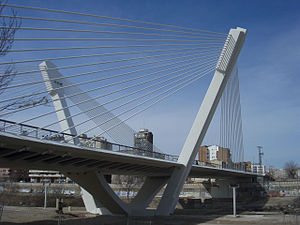 Lleida has been always a city with great sport tradition. Probably the most famous sport at the present time is basketball, because the club of basketball of the city a few years ago ascended to the ACB, being the revelation team in the league, this caused a lot of boys and girls to become fond of this little well-known sport. 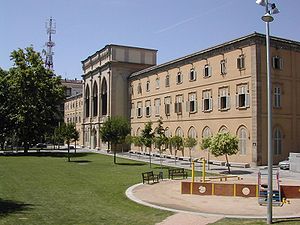 Lleida has sister relationships with many places worldwide: [18] [19]

The city is the subject of the Catalan folk song La Presó de Lleida, "The prison of Lleida", which was already attested in the 17th century and may be even older. It is a very popular tune, covered by many artists such as Joan Manuel Serrat.[20]