The label is neither the result of a contest or a mandatory requirement. Many villages that could pretend to the label never did so. Communes or communautés de communes have to submit an application form, providing that they meet some criteria. When an application is successful, the village can promote itself as part of the Most Beautiful Villages of France, for instance by displaying road signs at its entrances. Membership is not free, and every village has to pay an annual fee to the association. If a village does not respect the rules defined by the association, it may be excluded. Some villages also decided to quit the network after some years. The main criteria concern the aspect of the village: its population must not exceed 2,000 inhabitants, it must have a rural character and at least 2 national heritage sites.

The label has gained prestige and popularity through the years. It is very selective, as the association wants to keep the number of awarded villages under 200. Villages getting the label can expect a significant rise of visitors, usually between 10 and 50% of their annual figure.[2]

Most of the labelled villages are located in Southern France, especially in the Dordogne and Aveyron, two departments that comprise 10 villages each. Then come Vaucluse (7) and Lot (6).

The idea of an association to gather the most beautiful villages of France was born in Collonges-la-Rouge, Corrèze, in 1982. The mayor of this village imagined it after seeing a Reader's Digest book entitled Les Plus Beaux Villages de France showing pictures of Collonges. He imagined an association to gather beautiful villages so that they could better promote their touristic activity and get a wider reputation. He wrote to the mayors of the other villages depicted in the book and received an answer from 66 of them. The association was formally created on 6 March 1982 in Salers, Cantal.[3]

The association and its label have experienced a large success. Many other labels exist in France, usually with slightly different criteria, but the Plus Beaux Villages de France remain the most prestigious and the most popular. Since 2000, the president of the association has had a seat at the National Council for Tourism.[4]

The association was set up to help villages promoting their touristic potentials. It specifically targets villages that are sometimes neglected by wider regional or national touristic strategies. The association believes in improving life in French countryside and it places an emphasis on bringing back economical activities to villages. Most of the labelled villages are in regions that greatly suffer from rural flight. Many villages can be considered dead when most of their houses are either in ruins or transformed into holiday properties by foreigners or French people living in other regions. The association does not promote or encourage open-air museums and other museum-villages.[1]

One of the major principles of the association is the protection of the historical and cultural heritage. Labelled villages must show a real strategy to preserve and promote their heritage. The association encourages environmentally friendly tourism, for instance by encouraging tailor-made breaks rather than mere passing trade.[5]

The association asks candidate municipalities to fill an application form for the village or hamlet they want to see labelled. The locality must have a rural character with no more than 2,000 inhabitants and it must comprise two national heritage sites and their protection perimeter. The municipality must show real interest and the local council must have deliberated on the application.[6]

After the form is returned to the association, it sends experts to evaluate the application. They constitute a record of pictures and documents about the locality and consider its appearance (architecture, urbanism, dispositions for welcoming tourists, environmental quality). The dossier is then given to a commission who decides if the village is labelled or not. If it is successful, the municipality must sign a quality charter.[6]

The municipality must pay a fee to apply for the label and the association then ask for an annual fee (3 euros per inhabitant in the village in 2015).[6] Labelled villages are re-examined every six years.

File:Beynac01.jpg
Beynac-et-Cazenac is one of "The most beautiful villages of France"
File:Ainhoa panneau.jpg
Sign at the entrance of Ainhoa 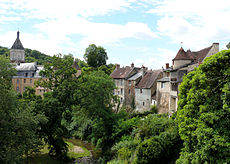 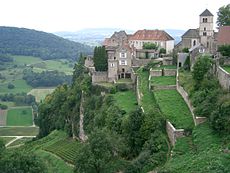 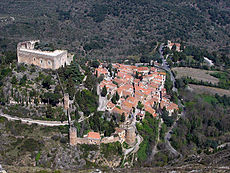 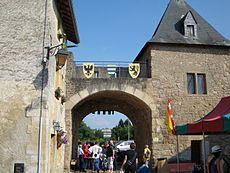 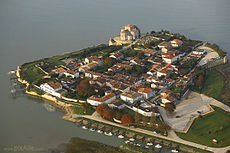 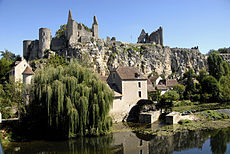 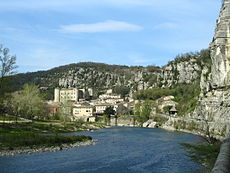 Vogüé and the Ardèche river 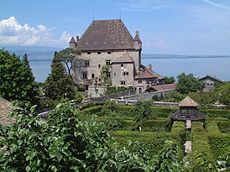 Yvoire and the Lake Léman.

Overseas departments and territories of France