Toilers of the Sea

Toilers of the Sea (French: Les Travailleurs de la mer) is a novel by Victor Hugo published in 1866. The book is dedicated to the island of Guernsey, where Hugo spent 19 years in exile.[citation needed] Like The Book of Ebenezer Le Page (1981) by G. B. Edwards, Hugo uses the setting of a small island community to transmute seemingly mundane events into drama of the highest calibre. Les Travailleurs de la Mer is set just after the Napoleonic Wars and deals with the impact of the Industrial Revolution upon the island.[citation needed]

The story concerns a Guernseyman named Gilliatt, a social outcast who falls in love with Deruchette, the niece of a local shipowner, Mess Lethierry. When Lethierry's ship is wrecked on the Roches Douvres, a perilous reef, Deruchette promises to marry whoever can salvage the ship's steam engine. Gilliatt eagerly volunteers, and the story follows his physical trials and tribulations (which include a battle with an octopus), as well as the undeserved opprobrium of his neighbours. 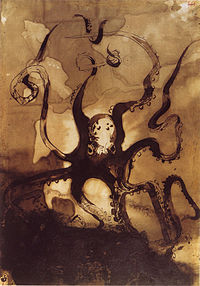 A woman arrives in Guernsey, with her son Gilliat, and buys a house said to be haunted. The boy grows up, the woman dies. Gilliat becomes a good fisherman and sailor. People believe him to be a wizard.

In Guernsey also lives Mess Lethierry – a former sailor and owner of the first steamship of the island, the Durande – with his niece Deruchette. One day, near Christmas, when going to church, she sees Gilliat on the road behind her and writes his name in the snow. He sees this and becomes obsessed with her gesture. In time he falls in love with her and goes to play the bagpipes near her house.

Sieur Clubin, the trusted captain of Durande, sets up a plan to sink the ship in the Hanois cliffs and flee with a ship of Spanish smugglers, Tamaulipas. He gets in touch with Rantaine, a swindler who had stolen a large sum of money from Mess Lethierry many years ago. Clubin takes the money from Rantaine at gunpoint.

In thick fog, Clubin sails for the Hanois cliffs from where he can easily swim to the shore, meet the smugglers, and disappear, giving the appearance of having drowned. Instead, he loses his way and sails to the Douvres cliffs which are much further from the shore. Left alone on the ship, he is terrified, but he sees a cutter and leaps into the water to catch it. In that moment he feels grabbed by the leg and is pulled down to the bottom. 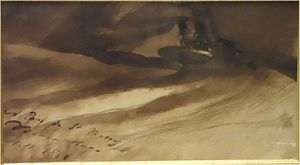 Everybody in Guernsey finds out about the shipwreck. Mess Lethierry is desperate to get the Durande's engine back. His niece declares she will marry the rescuer of the engine, and Mess Lethierry swears she will marry no other. Gilliat immediately takes up the mission, enduring hunger, thirst, and cold trying to free the engine from the wreck. In a battle with an octopus, he finds the skeleton of Clubin and the stolen money on the bottom of the sea.

Eventually he succeeds in returning the engine to Lethierry, who is very pleased and ready to honour his promise. Gilliat appears in front of the people as the rescuer but he declines to marry Deruchette because he had seen her accepting a marriage proposal made by Ebenezer Caudry, the young priest recently arrived on the island. He arranges their hurried wedding and helps them run away on the sailing ship Cashmere. In the end, with all his dreams shattered, Gilliat decides to wait for the tide sitting on the Gild Holm'Ur chair (a rock in the sea) and drowns as he watches the Cashmere disappear on the horizon. 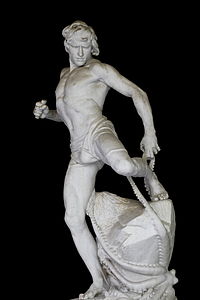 Gilliatt and the Octopus by Joseph Carlier

The novel is credited with introducing the Guernésiais word for octopus (pieuvre) into the French language (standard French for octopus is poulpe).[citation needed]

The following dedication appears at the front of the book:

(I dedicate this book to the rock of hospitality and liberty, to that portion of old Norman ground inhabited by the noble little nation of the sea, to the island of Guernsey, severe yet kind, my present asylum, perhaps my tomb.)

Hugo had originally intended his essay L'Archipel de la Manche (The Archipelago of the [English] Channel) as an introduction to this novel, although it was not published until 1883, and the two have only been published together in the 20th century.[citation needed]

In 2002, Modern Library published an edition with a new translation by James Hogarth, which bills itself as "the first unabridged English edition of the novel".[citation needed]

There have been at least six film adaptations of the novel, including: