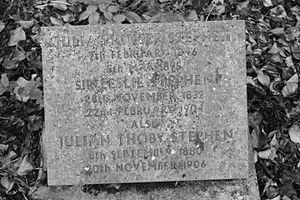 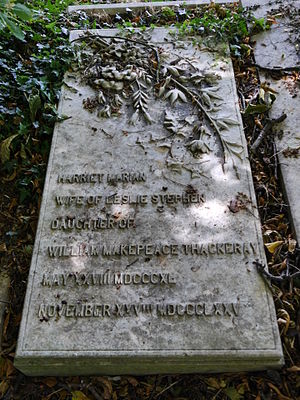 Stephen was born at Kensington Gore in London, the brother of James Fitzjames Stephen and son of Sir James Stephen. His family had belonged to the Clapham Sect, the early 19th century group of mainly evangelical Christian social reformers. At his father's house he saw a good deal of the Macaulays, James Spedding, Sir Henry Taylor and Nassau Senior. After studying at Eton College, King's College London and Trinity Hall, Cambridge, where he graduated B.A. (20th wrangler) in 1854 and M.A. in 1857, Stephen remained for several years a fellow and tutor of his college.[1] He recounted some of his experiences in a chapter in his Life of Fawcett as well as in some less formal Sketches from Cambridge: By a Don (1865). These sketches were reprinted from the Pall Mall Gazette, to the proprietor of which, George Murray Smith, he had been introduced by his brother. It was at Smith's house at Hampstead that Stephen met his first wife, Harriet Marian (1840–1875), daughter of William Makepeace Thackeray, with whom he had a daughter, Laura Makepeace Stephen (1870–1945). He and his daughter were cared for by his sister Caroline Emelia Stephen who was a writer, although Leslie described her as "Silly Milly" and her books as "little works".[2]

His second marriage was to Julia Prinsep Jackson (1846–1895), widow of Herbert Duckworth. With her he had four children: 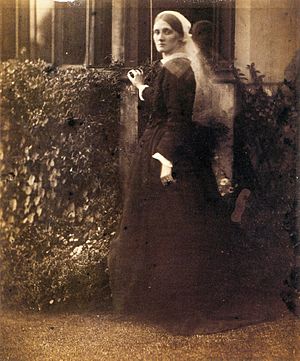 In the 1850s, Stephen and his brother James Fitzjames Stephen were invited by Frederick Denison Maurice to lecture at The Working Men's College. Leslie Stephen became a member of the College's governing College Corporation.[3]

He died in Kensington. He is buried in the eastern section of Highgate Cemetery in the raised section alongside the northern path. His daughter, Virginia Woolf, was badly affected by his death and she was cared for by his sister, Caroline.[2] Woolf in 1922 created a detailed psychological portrait of him in the fictional character of Mr. Ramsay in her classic novel, To the Lighthouse, (as well as of her mother as Mrs. Ramsay). (Ref: The Diaries and Letters of Virginia Woolf)

While at Cambridge, Stephen became an Anglican clergyman. In 1865, having renounced his religious beliefs, and after a visit to the United States two years earlier, where he had formed lasting friendships with Oliver Wendell Holmes, Jr., James Russell Lowell and Charles Eliot Norton, he settled in London and became a journalist, eventually editing the Cornhill Magazine in 1871 where R. L. Stevenson, Thomas Hardy, W. E. Norris, Henry James, and James Payn figured among his contributors.

In his spare time, he participated in athletics and mountaineering. He also contributed to the Saturday Review, Fraser, Macmillan, the Fortnightly, and other periodicals. He was already known as a climber, as a contributor to Peaks, Passes and Glaciers (1862), and as one of the earliest presidents of the Alpine Club, when, in 1871, in commemoration of his own first ascents in the Alps, he published The Playground of Europe, which immediately became a mountaineering classic, drawing—together with Whymper's Scrambles Amongst the Alps—successive generations of its readers to the Alps.

During the eleven years of his editorship, in addition to three volumes of critical studies, he made two valuable contributions to philosophical history and theory. The first was The History of English Thought in the Eighteenth Century (1876 and 1881). This work was generally recognised as an important addition to philosophical literature and led immediately to Stephen's election at the Athenaeum Club in 1877. The second was The Science of Ethics (1882). It was extensively adopted as a textbook on the subject and made him the best-known proponent of evolutionary ethics in late-nineteenth-century Britain.

Stephen also served as the first editor (1885–91) of the Dictionary of National Biography. 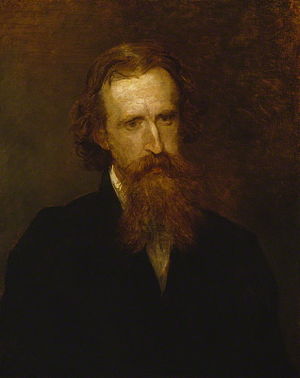 Stephen was one of the most prominent figures in the golden age of alpinism (the period between Wills's ascent of the Wetterhorn in 1854 and Whymper's ascent of the Matterhorn in 1865) during which many major alpine peaks saw their first ascents. Joining the Alpine Club in 1857 (the year of its formation), Stephen made the first ascent, usually in the company of his favourite Swiss guide Melchior Anderegg, of the following peaks: