From Infogalactic: the planetary knowledge core
Jump to: navigation, search
This article is about the phrase. For other uses, see Let them eat cake (disambiguation). 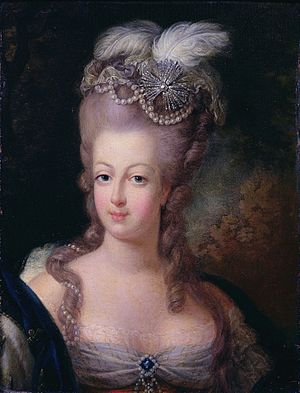 The phrase is commonly misattributed to Marie Antoinette

"Let them eat cake" is the traditional translation of the French phrase "Qu'ils mangent de la brioche", supposedly spoken by "a great princess" upon learning that the peasants had no bread. Since brioche was a luxury bread enriched with butter and eggs, the quote would reflect the princess's disregard for peasants.

While it is commonly attributed to Queen Marie Antoinette,[1] there is no record of this phrase ever having been said by her. It appears in Jean-Jacques Rousseau's Confessions, his autobiography (whose first six books were written in 1765, when Marie Antoinette was nine years of age, and published in 1782). The context of Rousseau's account was his desire to have some bread to accompany some wine he had stolen; however, in feeling he was too elegantly dressed to go into an ordinary bakery, he thus recollected the words of a "great princess".[2] As he wrote in Book 6:

Finally I recalled the stopgap solution of a great princess who was told that the peasants had no bread, and who responded: "Let them eat brioche."

Rousseau does not name the "great princess" and he may have invented the anecdote, as Confessions was, on the whole, not a very reliable autobiography.[3]

The quotation, as attributed to Marie Antoinette, was claimed to have been uttered during one of the famines that occurred in France during the reign of her husband, Louis XVI. Upon being alerted that the people were suffering due to widespread bread shortages, the Queen is said to have replied, "Then let them eat brioche."[4] Although this anecdote was never cited by opponents of the monarchy at the time of the French Revolution, it did acquire great symbolic importance in subsequent histories when pro-revolutionary historians sought to demonstrate the obliviousness and selfishness of the French upper classes at that time. As one biographer of the Queen notes, it was a particularly useful phrase to cite because "the staple food of the French peasantry and the working class was bread, absorbing 50 percent of their income, as opposed to 5 percent on fuel; the whole topic of bread was therefore the result of obsessional national interest."[5] 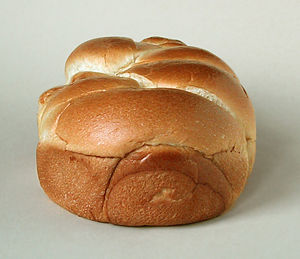 Brioche, whose term is used in the French phrase

However, there is no evidence that Queen Marie-Antoinette ever uttered this phrase. It was first attributed to her by Alphonse Karr in Les Guêpes of March, 1843.[6] Other objections to the legend of Marie-Antoinette and the cake/brioche comment centre on arguments concerning the queen's personality, internal evidence from members of the French royal family and the date of the saying's origin. For example, the Queen's English-language biographer, Antonia Fraser, wrote in 2002:

[Let them eat cake] was said 100 years before her by Marie-Thérèse, the wife of Louis XIV. It was a callous and ignorant statement and she, Marie Antoinette, was neither.[7]

The attribution also has little credibility. Fraser cites as justification for the alternative attribution to the wife of Louis XIV the memoirs of Louis XVIII, who was only fourteen when Rousseau's Confessions were written and whose own memoirs were published much later. He does not mention Marie-Antoinette in his account, but states that the saying was an old legend and that within the family it was always believed that the saying belonged to the Spanish princess who married Louis XIV in the 1660s. Thus, Louis XVIII is as likely as others to have had his recollection affected by the quick spreading and distorting of Rousseau's original remark.

A second point is that there were no actual famines during the reign of King Louis XVI and only two incidents of serious bread shortages, which occurred, first, in April–May 1775, a few weeks before the king's coronation (11 June 1775), and again in 1788, the year before the French Revolution. The 1775 shortages led to a series of riots, known as the Flour War, la guerre des farines, a name given at the time of their occurrence, that took place in the northern, eastern and western parts of France. Letters from Marie-Antoinette to her family in Austria at this time reveal an attitude totally different to the Let them eat cake mentality.

It is quite certain that in seeing the people who treat us so well despite their own misfortune, we are more obliged than ever to work hard for their happiness. The King seems to understand this truth.[9]

There is a further problem with the dates surrounding the attribution in that Marie-Antoinette was not only too young but wasn't even in France when it was written. Although only published in 1782, Rousseau's Confessions were finished in 1769. Marie Antoinette, age 14, didn't arrive at Versailles from Austria until 1770. She was unknown to him at the time of writing his work so she couldn't have been the "great princess" mentioned by Rousseau.[10]

When studying how this phrase came to be attributed to Marie Antoinette, it is important to understand the increasing unpopularity of the Queen in the final years before the outbreak of the French Revolution. During her marriage to Louis XVI, her perceived frivolousness and her very real extravagance were often cited as factors that only worsened France's dire financial straits.[11] Her Austrian birth and sex were also a major factor in a country where xenophobia and chauvinism still played major parts in national politics.[12] In fact, many anti-monarchists were so convinced (albeit incorrectly) that it was Marie Antoinette who had single-handedly ruined France's finances that they nicknamed her Madame Déficit.[13] In addition, anti-royalist libellists printed stories and articles that attacked the royal family and their courtiers with exaggerations, fictitious events, and outright lies. Therefore, with such strong sentiments of dissatisfaction and anger towards the King and Queen, it is quite possible that a discontented individual fabricated the scenario and put the words into the mouth of Marie Antoinette.

Another hypothesis is that after the revolution, the phrase was attributed to various princesses of the French royal family, and that the legend stuck on Marie-Antoinette because she was, in effect, the last "great princess" of Versailles. The myth had, for example, been previously attributed to two of Louis XV's daughters: Madame Sophie and Madame Victoire.

In his novel Ange Pitou (1853), Alexandre Dumas attributes the quote to one of Marie-Antoinette's favourites, the Duchess of Polignac.

Zhu Muzhi, president of the China Society for Human Rights Studies, asserts that Rousseau's version is an alteration of a much older anecdote: "An ancient Chinese emperor who, being told that his subjects didn't have enough rice to eat, replied, 'Why don't they eat meat?' (「何不食肉糜？」)"[14] The phrase was attributed to Emperor Hui of Jin in Zizhi Tongjian.