Lewis Cass (9 October 1782 – 17 June 1866) was an American military officer, politician, and statesman. He represented Michigan in the United States Senate and served in the Cabinets of two U.S. Presidents, Andrew Jackson and James Buchanan. He was also the 1848 Democratic presidential nominee and a leading spokesman for the Doctrine of Popular Sovereignty, which held that the people in each territory should decide whether to permit slavery.

Born in Exeter, New Hampshire, he attended Phillips Exeter Academy before establishing a legal practice in Zanesville, Ohio. After serving in the Ohio House of Representatives, he was appointed as a U.S. Marshal. Cass also joined the Freemasons and would eventually co-found the Grand Lodge of Michigan. He fought at the Battle of the Thames in the War of 1812 and was appointed to govern Michigan Territory in 1813. He negotiated treaties with Native Americans to open land for American settlement and led a survey expedition into the northwest part of the territory.

Cass resigned as governor in 1831 to accept appointment as Secretary of War under Andrew Jackson. As Secretary of War, he helped implement Jackson’s policy of Indian removal. After serving as ambassador to France from 1836 to 1842, he unsuccessfully sought the presidential nomination at the 1844 Democratic National Convention; a deadlock between supporters of Cass and former President Martin Van Buren ended with the nomination of James K. Polk. In 1845, the Michigan Legislature elected Cass to the Senate, where he served until 1848. Cass’s nomination at the 1848 Democratic National Convention precipitated a split in the party, as Cass's advocacy for popular sovereignty alienated the anti-slavery wing of the party. Van Buren led the Free Soil Party's presidential ticket and appealed to many anti-slavery Democrats, possibly contributing to the victory of Whig nominee Zachary Taylor.

Cass returned to the Senate in 1849 and continued to serve until 1857 when he accepted appointment as the Secretary of State. He unsuccessfully sought to buy land from Mexico and sympathized with American filibusters in Latin America. Cass resigned from the Cabinet in December 1860 in protest of Buchanan's handling of the threatened secession of several Southern states. Since his death in 1866, he has been commemorated in various ways, including with a statue in the National Statuary Hall.

Cass was born on October 9, 1782, in Exeter, New Hampshire, near the end of the American Revolution. His parents were Molly (née Gilman) Cass and Major Jonathan Cass, a Revolutionary War veteran who fought under General George Washington at Bunker Hill.[1]

Cass attended the private Phillips Exeter Academy. In 1800, the family moved to Marietta, Ohio, part of a wave of westward migration after the end of the war and defeat of Native Americans in the Northwest Indian War. Cass studied law with Return J. Meigs Jr., was admitted to the bar, and began a practice in Zanesville.

In 1806, Cass was elected to the Ohio House of Representatives. The following year, President Thomas Jefferson appointed Cass as the U.S. Marshal for Ohio.[2]

He joined the Freemasons, an increasingly popular fraternal organization in that period, being initiated as an Entered Apprentice in what was later American Union Lodge No.1 at Marietta on December 5, 1803.[3] He achieved his Fellow Craft degree on April 2, 1804, and his Master Mason degree on May 7, 1804. On June 24, 1805, he was admitted as Charter member of the Lodge of Amity 105 (later No.5), Zanesville. He served as the first Worshipful Master of the Lodge of Amity in 1806.[3] Cass was one of the founders of the Grand Lodge of Ohio, representing the Lodge of Amity at the first meeting on January 4, 1808. He was elected Deputy Grand Master on January 5, 1809, and Grand Master on January 3, 1810, January 8, 1811, and January 8, 1812.[3]

When the War of 1812 began against the United Kingdom, Cass took command of the 3rd Ohio Volunteer Regiment. He became colonel of the 27th United States Infantry Regiment on February 20, 1813. Soon after, he was promoted to brigadier general in the Regular Army on March 12, 1813. Cass took part in the Battle of the Thames, a defeat of British and Native Indian forces. Cass resigned from the Army on May 1, 1814.

As a reward for his military service, Cass was appointed Governor of the Michigan Territory by President James Madison on October 29, 1813, serving until 1831. As he was frequently traveling on business, several territorial secretaries often acted as governor in his place. During this period, he helped negotiate and implement treaties with Native American tribes in Michigan, by which they ceded substantial amounts of land. Some were given small reservations in the territory.

In 1817, Cass was one of the two commissioners (along with Duncan McArthur), who negotiated the Treaty of Fort Meigs, which was signed on September 29 with several Native American tribes of the region, under which they ceded large amounts of territory to the United States.[4] This helped open up areas of Michigan to settlement by Euro-Americans. That same year, Cass was named to serve as Secretary of War under President James Monroe, but he declined the appointment.

In 1820, Cass led an expedition to the northwestern part of Michigan Territory, in the Great Lakes region in today's northern Minnesota. Its purpose was to map the region and locate the source of the Mississippi River. The headwater of the great river was then unknown, resulting in an undefined border between the United States and British North America, which had been linked to the river. The Cass expedition erroneously identified what became known as Cass Lake as the Mississippi's source. It was not until 1832 that Henry Rowe Schoolcraft, the Cass expedition's geologist, identified nearby Lake Itasca as the headwater of the Mississippi.

On August 1, 1831, Cass resigned as governor of the Michigan Territory to take the post of Secretary of War under President Andrew Jackson, a position he would hold until 1836. Cass was a central figure in implementing the Indian removal policy of the Jackson administration; Congress had passed the Indian Removal Act in 1830. While it was directed chiefly against the Southeastern tribes, especially the Five Civilized Tribes, it also affected tribes in Ohio, Illinois, and other areas east of the Mississippi River. Most were forced to Indian Territory in present-day Kansas and Oklahoma, but a number of bands negotiated being allowed to remain in Michigan.[1]

At the end of his term, President Jackson appointed Cass to succeed Edward Livingston as the U.S. Minister to France on October 4, 1836. He presented his credentials on December 1, 1836, and served until he left his post on November 12, 1842, when he was succeeded by William R. King, who later became the 13th Vice President of the United States under President Franklin Pierce.

In the 1844 Democratic convention Cass stood as a candidate for the presidential nomination, losing on the 9th ballot to dark horse candidate James K. Polk.

Cass was elected by the state legislature to represent Michigan in the United States Senate, serving in 1845-48. He served as chairman of the Committee on Military Affairs in the 30th Congress.

In 1848, he resigned from the Senate to run for president in the 1848 election. William Orlando Butler was selected as his running mate.[5] Cass was a leading supporter of the doctrine of popular sovereignty, which held that the American citizens who lived in a territory should decide whether to permit slavery there.[6] His nomination caused a split in the Democratic Party, leading many antislavery Northern Democrats to join the Free Soil Party, which nominated former President Martin Van Buren.

Cass made another bid for president in 1852 but neither he nor rival Democratic contenders Buchanan and Stephen Douglas secured a majority of delegates’ votes at the Democratic Convention in Baltimore, and the party went with Franklin Pierce instead. 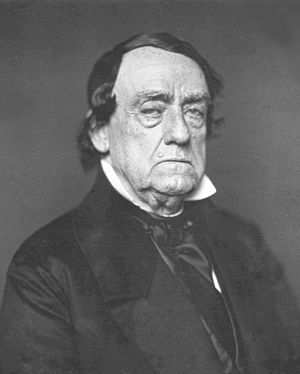 On March 6, 1857, President James Buchanan appointed Cass to serve as Secretary of State as a consolation prize for his previous presidential runs. Although retaining incumbent Secretary of State William L. Marcy was considered the best option by many, Buchanan made it clear that he did not want to keep anyone from the Pierce Administration. Moreover, Marcy had opposed his earlier presidential bids, and was in poor health in any event, ultimately dying in July 1857. Cass, aged 75, was seen by most as too old for such a demanding position and was thought to be likely be little more than a figurehead. Buchanan, weighing many of the other options for Secretary of State, considered that Cass was the best choice to avoid political infighting and sectional tensions. Buchanan, who did not particularly like Cass, nonetheless wrote a flattering letter offering him the post of Secretary of State, commenting that he was remarkably active and energetic for his advanced age. Cass, who was retiring from the Senate, but not eager to leave Washington and return home to Michigan, immediately accepted.

Aware of his age and physical limitations, Cass agreed to delegate most of his powers as Secretary of State to an Assistant Secretary of State or the president himself. He also promised to refrain from making anti-British remarks in public (having served in the War of 1812, Cass had a low opinion of London). Most assumed Cass was a temporary Secretary of State until a younger, more fit man could be found, however, he ultimately served for all but the final four months of Buchanan’s administration. As expected, the aged Cass largely delegated major decision-making to subordinates, but eagerly signed his name on papers and dispatches penned by them.[4]

While sympathetic to American filibusters in Central America, he was instrumental in having Commodore Hiram Paulding removed from command for his landing of Marines in Nicaragua and compelling the extradition of William Walker to the United States.[7] Cass attempted to buy more land from Mexico, but faced opposition from both Mexico and congressional leaders. He also negotiated a final settlement to the Clayton–Bulwer Treaty, limiting U.S. and British control of Latin American countries.[2] The chiefs of Raiatea and Tahaa in the South Pacific, refusing to accept the rule of King Tamatoa V, unsuccessfully petitioned the United States to accept the islands under a protectorate in June 1858.[8]

Cass resigned on December 14, 1860, because of what he considered Buchanan’s failure to protect federal interests in the South and failure to mobilize the federal military, actions that might have averted the threatened secession of Southern states.[9]

On May 26, 1806, Cass married Elizabeth Spencer (1786–1853), the daughter of Dr. Joseph Spencer Jr. and Deborah (née Seldon) Spencer.[4] Her paternal grandfather was Joseph Spencer, a Continental Congressman who was a major general in the Continental Army.[10] Lewis and Elizabeth were the parents of seven children, five of whom lived past infancy:[11]

Cass died on June 17, 1866, in Detroit, Michigan. He is buried in Elmwood Cemetery in Detroit.

Through his daughter Mary, he was the great-grandfather of Cass Canfield (longtime president and chairman of Harper & Brothers, later Harper & Row).[13]

Through his daughter Matilda, he was the grandfather of Elizabeth Cass Ledyard (wife of Francis Wayland Goddard);[14] Henry Brockholst Ledyard Jr. (who was president of the Michigan Central Railroad);[15][16] Susan Livingston Ledyard (wife of Hamilton Bullock Tompkins);[17] Lewis Cass Ledyard (a prominent lawyer with Carter Ledyard & Milburn who was the personal counsel of J. Pierpont Morgan);[18][19] and Matilda Spancer Ledyard.[20]

Other honors and memberships