Haslam was the son of John Haslam of Gilnow House in Bolton in Lancashire. He was educated at University College School and University College, London. In 1893 he married Helen Norma Dixon of Watlington, Oxfordshire.[1]

Haslam was the director of cotton spinning and manufacturing companies.[2] He has been classified as a genuinely second generation self-made man and was among the most wealthy MPs of his time.[3] He also served as a Justice of the Peace for the county of Lancaster.[1]

At the 1892 general election he contested the Westhoughton Division of Lancashire, in opposition to Lord Stanley reducing the Conservative majority by 500 votes. He does not appear to have been a candidate in 1895 but in 1900 he stood in Stamford in Lincolnshire, again without success.[2]

He was eventually returned to the House of Commons at the 1906 Liberal landslide at Monmouth. 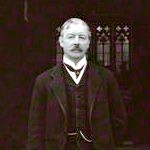 He was a supporter of the coalition government of David Lloyd George and at the 1918 was a recipient of the government coupon, gaining the support of the local Conservative and Liberal Associations.

Along with fellow Coalition Liberal Edgar Rees Jones of the Merthyr constituency, Haslam played a minor role in the discussions behind the Government of Ireland Bill.[6] Haslam in particular was strongly opposed to giving the Irish Parliament control of its own taxes.[6]

The 1922 Newport by-election held after his death marked the end of the Lloyd George Coalition Government.[7]