Lewis Vulliamy (15 March 1791 – 4 January 1871) was an English architect belonging to the Vulliamy family of clockmakers.

Lewis Vulliamy was the brother of the clockmaker Benjamin Vulliamy. He was born in Pall Mall, London on 15 March 1791, and articled to Sir Robert Smirke. He was admitted to the Royal Academy Schools in 1809, where he won the silver medal the year after for an architectural drawing, and the gold medal in 1813. He was elected Royal Academy travelling student in 1818, after which he studied abroad for four years, mostly in Italy, but also visiting Greece and Asia Minor.[1] 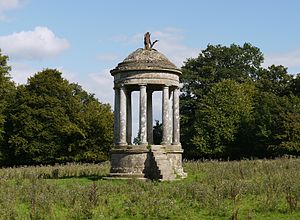 He drew the plans, elevations, and sections of the castle of Newcastle-upon-Tyne, published in Vetusta Monumenta,' 1835 (vol. v. plates x–xviii).[4]

Published the book "Examples of Ornamental Sculpture in Architecture Drawn from the originals of Bronze, Marble,and Terra Cotta, In Greece, Asia Minor, and Italy - in the years 1818,1819, 1820 and part of 1821.- By Lewis Vulliamy Architect and engraved by Henry Moses." Size 470 x 330mm. 40 n0 folios. (Digitised version, Unibibliothek Heidelberg). Includes fine engravings of architectural details from: The Choragic Monument of Lysicrates, Athens, Ornamental termination of the marble tiles at each corner of the Parthenon, capital from ruins of Temple of Apollo Didymeus, part of the soffit of Temple of Jupiter, part of frieze of Temple of the sun from the Gardens of the Colonna Palace in the Quirinal Hill at Rome and others.