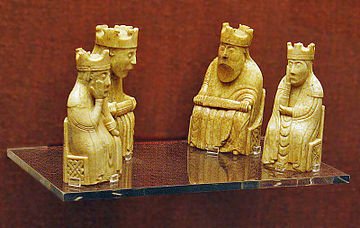 Lewis chessmen in the British Museum

The Lewis chessmen (or Uig chessmen, named after the bay where they were found) are a group of 12th-century chess pieces, along with other gaming pieces, most of which are carved in walrus ivory. Discovered in 1831 on the Isle of Lewis in the Outer Hebrides, Scotland,[1] they may constitute some of the few complete, surviving medieval chess sets, although it is not clear if a set as originally made can be assembled from the pieces. When found, the hoard contained 93 artifacts: 78 chess pieces, 14 tablemen and one belt buckle. Today, 82 pieces are owned and usually exhibited by the British Museum in London, and the remaining 11 are at the National Museum of Scotland in Edinburgh. 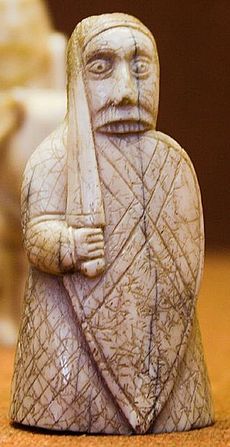 "Berserker" rook, at the British Museum

The chessmen were probably made in Trondheim, Norway, in the 12th century,[2] although some scholars have suggested other Nordic countries.[3] During that period, the Outer Hebrides, along with other major groups of Scottish islands, were ruled by Norway.[2]

According to Dr. Alex Woolf, director of the University of St. Andrews Institute for Medieval Studies, there are reasons for believing the pieces came from Trondheim:

Icelanders Gudmundur Thorarinsson and Einar Einarsson have proposed that the chessmen originated in Iceland, since only in Iceland were the bishops called that at that time, while in other countries they used a name unassociated with the church.[5] However, this is disputed by Woolf, who stated that the use of bishops originated in England,[4] and by Norwegian chess historian and member of the Ken Whyld Association[6] Morten Lilleøren.[7]

Some historians believe that the Lewis chessmen were hidden (or lost) after some mishap occurred during their carriage from Norway to wealthy Norse towns on the east coast of Ireland, such as Dublin. The large number of pieces and their lack of wear may suggest that they were the stock of a trader or dealer.[2] Along with the chess pieces, there were 14 plain round tablemen for the game of tables and one belt buckle, all made of ivory, making a total of 93 artifacts.[8]

Almost all of the pieces in the collection are carved from walrus ivory, with a few made instead from whale teeth. The 78[9] pieces consist of eight kings, eight queens, 16 bishops, 15 knights, 12 rooks and 19 pawns. The heights of the pawns range from 3.5 to 5.8 cm, while the other pieces are between 7 and 10.2 cm. Although there are 19 pawns (a complete set requires 16), they have the greatest range of sizes of all the pieces, which has suggested that the 78 pieces might belong to at least five sets.[10] All the pieces are sculptures of human figures, with the exception of the pawns, which are smaller, geometric shapes. The knights are mounted on rather diminutive horses and are shown holding spears and shields. The rooks are standing soldiers or warders holding shields and swords; four of the rooks are shown as wild-eyed berserkers biting their shields with battle fury.[11] Some pieces bore traces of red stain when found, indicating that red and white were used to distinguish the two sides, rather than the black and white used in modern chess.[4] 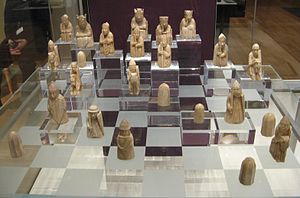 The Lewis chessmen in the British Museum

Scholars have observed that, to the modern eye, the figural pieces, with their bulging eyes and glum expressions, have a distinct comical character.[12][13] This is especially true of the single rook with a worried, sideways glance (front left of first image below) and the berserkers biting their shields, which have been called "irresistibly comic to a modern audience."[14] It is believed, however, that the comic or sad expressions were not intended or perceived as such by the makers, to whom these images instead displayed strength, ferocity or, in the case of the queens who hold their heads with a hand, "contemplation, repose and possibly wisdom."[12]

The chessmen were discovered in early 1831 in a sand bank at the head of Camas Uig on the west coast of the Isle of Lewis, in the Outer Hebrides of Scotland. There are various local stories concerning their arrival and modern discovery on Lewis.

Malcolm "Sport" MacLeod (Scottish Gaelic: Calum an Sprot) from the nearby township of Pennydonald discovered the trove in a small stone kist in a dune, exhibited them briefly in his byre and sold them on to Captain Roderick Ryrie.[15] One reported detail, that it was a cow that actually unearthed the stash, is generally discounted in Uig as fabrication. After the Isle of Lewis was purchased by Sir James Matheson in 1844, Malcolm Macleod and his family were evicted and the district was transformed into sheep farms. 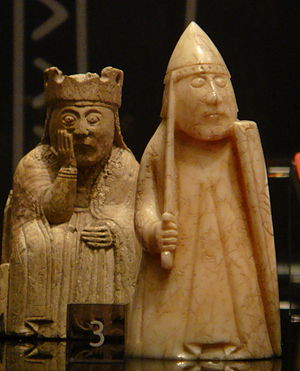 A queen and a rook in the joint exhibition in Edinburgh, 2010

They were exhibited by Ryrie at a meeting of the Society of Antiquaries of Scotland, on April 11, 1831. The chessmen were soon after split up, with 10 being purchased by Charles Kirkpatrick Sharpe and the others (67 chessmen and 14 tablemen) purchased on behalf of the British Museum in London.

Kirkpatrick Sharpe later found another bishop to take his collection up to eleven, all of which were later sold to Lord Londesborough. In 1888, they were again sold, but this time the purchaser was the Society of Antiquaries of Scotland, who donated the pieces to the Royal Scottish Museum in Edinburgh. The eleven are now on display in the National Museum of Scotland.

Of the pieces given to the British Museum, most can be found in Room 40, with the registration numbers M&ME 1831, 11–1.78–159. Others have been lent to Scottish museums and temporary exhibitions.[2] A range of resin or plastic replicas provides popular items in the Museum shops.

The chessmen were number 5 in the list of British archaeological finds selected by experts at the British Museum for the 2003 BBC Television documentary Our Top Ten Treasures, presented by Adam Hart-Davis. They feature in the 2010 BBC Radio 4 series A History of the World in 100 Objects as number 61, in the "Status Symbols" section.

An exhibition entitled "The Lewis Chessmen: Unmasked", which includes chesspieces from both the National Museum of Scotland and British Museum collections, along with other relevant objects, toured Scotland in 2010–2011. The exhibition opened in Edinburgh on 21 May 2010 and proceeded to Aberdeen, Shetland, and the Museum nan Eilean in Stornoway, opening there on 15 April 2011.[16]

An exhibition entitled "The Game of Kings: Medieval Ivory Chessmen from the Isle of Lewis" at The Cloisters in New York City included 34 of the chess pieces, all on loan from the British Museum. The exhibit ended April 22, 2012.[17]

On the 3rd of April 2013, £1.8 million from the European Regional Development Fund was granted to transform Lews Castle, on the Isle of Lewis, into a Museum for the Western Isles. Around £14 million in total is to be spent on restoring and converting the property, which has been shut for almost twenty-five years. When completed the permanent displays will include six of the Lewis Chessmen.[18]

File:Chess01.jpg
Lewis chessmen in the National Museum of Scotland

In 2007–2008 a dispute arose regarding the most appropriate place to display the pieces. The issue first arose[citation needed] late in 2007 with calls from Scottish National Party (SNP) politicians in the Western Isles (notably Councillor Annie Macdonald, MSP Alasdair Allan and MP Angus MacNeil) for the return of the pieces to the place they were found. Linda Fabiani, the Scottish Minister for Europe, External Affairs and Culture, stated that "it is unacceptable that only 11 Lewis Chessmen rest at the National Museum of Scotland while the other 67 (as well as the 14 tablemen) remain in the British Museum in London."

Richard Oram, Professor of Medieval and Environmental History at the University of Stirling, agreed, arguing that there was no reason for there to be more than "a sample" of the collection in London. Both points of view have been dismissed by Margaret Hodge, the UK Minister of State in the Department for Culture, Media and Sport, writing "It's a lot of nonsense, isn't it?"[15] The local historical society in Uig, Comann Eachdraidh Uig, which operates a registered museum near the find site featuring detailed information about the chessmen and Norse occupation in Lewis, has indicated publicly that it has no intention of pursuing any claim to the ownership of the pieces and does not support demands for them to be sent to Edinburgh, but would welcome short-term loans.[19]

In October 2009, twenty-four of the pieces from London and six from Edinburgh began a 16-month tour of various locations in Scotland. The tour was partly funded by the Scottish Government, and Mike Russell, the Minister for Culture and External Affairs, stated that the Government and the British Museum had "agreed to disagree" on their eventual fate. Bonnie Greer, the museum's deputy chairman, said that she "absolutely" believed the main collection should remain in London.[20]