From Infogalactic: the planetary knowledge core
(Redirected from Leyli and Majnun)
Jump to: navigation, search
For other uses, see Layla and Majnun (disambiguation).
"Majnun" redirects here. For places in Iran, see Majnun, Iran. 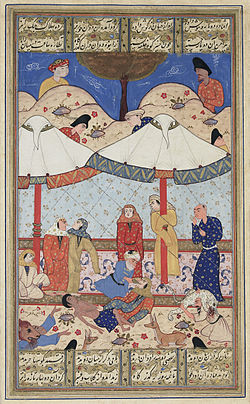 A miniature of Nizami's work. Layla and Majnun meet for the last time before their deaths. Both have fainted and Majnun's elderly messenger attempts to revive Layla while wild animals protect the pair from unwelcome intruders. Late 16th-century illustration. 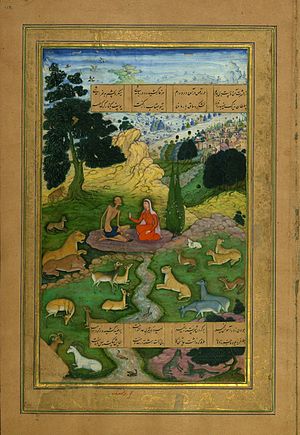 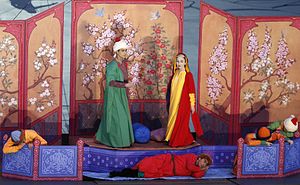 Layla and Majnun at the opening ceremony of the 2015 European Games in Baku.

Layla and Majnun (English: Possessed by madness for Layla; Arabic: مجنون لیلی‎‎; (Majnun Layla)) is a love story that originated as poem in 11th Century Arabia, later was adopted by the Persian poet Nizami Ganjavi who also wrote "Khosrow and Shirin". It is the third of his five long narrative poems, Khamsa (the Quintet).

Qays and Layla fall in love with each other when they are young, but when they grow up Layla’s father doesn't allow them to be together. Qays becomes obsessed with her, and the community gives him the epithet Majnun (مجنون, lit. "possessed"), the same epithet given to the semi-historical character Qays ibn al-Mulawwah of the Banu 'Amir tribe. Long before Nizami, the legend circulated in anecdotal forms in Arabic akhbar. The early anecdotes and oral reports about Majnun are documented in Kitab al-Aghani and Ibn Qutaybah's al-Shi'r wal-Shu'ara'. The anecdotes are mostly very short, only loosely connected, and show little or no plot development. />

Many imitations have been contrived of Nizami's work, several of which are original literary works in their own right, including Amir Khusrow Dehlavi's Majnun o Leyli (completed in 1299), and Jami's version, completed in 1484, amounts to 3,860 couplets. Other notable reworkings are by Maktabi Shirazi, Hatefi (d. 1520), and Fuzûlî (d.1556), which became popular in Ottoman Turkey and India. Sir William Jones published Hatefi's romance in Calcutta in 1788. The popularity of the romance following Nizami's version is also evident from the references to it in lyrical poetry and mystical mathnavis—before the appearance of Nizami's romance, there are just some allusions to Layla and Majnun in divans. The number and variety of anecdotes about the lovers also increased considerably from the twelfth century onwards. Mystics contrived many stories about Majnun to illustrate technical mystical concepts such as fanaa (annihilation), divānagi (love-madness), self-sacrifice, etc. Nizami's work has been translated into many languages.[1]

Qays Ibn al-Mulawwah fell in love with Layla. He soon began composing poems about his love for her, mentioning her name often. His unselfconscious efforts to woo the girl caused some locals to call him "Majnun" (madman). When he asked for her hand in marriage, her father refused because it would be a scandal for Layla to marry someone considered mentally unbalanced. Soon after, Layla was married to another noble and rich merchant belonging to the Thaqif tribe in Ta'if. He was described as a handsome man with reddish complexion whose name was Ward Althaqafi. The Arabs called him Ward, meaning "rose" in Arabic.

When Majnun heard of her marriage, he fled the tribal camp and began wandering the surrounding desert. His family eventually gave up hope for his return and left food for him in the wilderness. He could sometimes be seen reciting poetry to himself or writing in the sand with a stick.

Layla is generally depicted as having moved to a place in Northern Arabia with her husband, where she became ill and eventually died. In some versions, Layla dies of heartbreak from not being able to see her would-be lover. Majnun was later found dead in the wilderness in 688 AD, near Layla’s grave. He had carved three verses of poetry on a rock near the grave, which are the last three verses attributed to him. 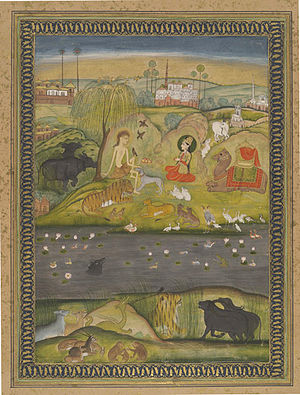 Layla visits Majnun in the wilderness; Indian watercolour held by the Bodleian Library

Many other minor incidents happened between his madness and his death. Most of his recorded poetry was composed before his descent into madness.

It is a tragic story of undying love much like the later Romeo and Juliet. This type of love is known as "virgin love" because the lovers never marry or consummate their passion. Other famous virgin love stories set in Arabia are the stories of Qays and Lubna, Kuthair and Azza, Marwa and Al Majnoun Al Faransi, Antara and Abla, and Irfan and Zoobi. This literary motif is common throughout the world, notably in the Muslim literature of South Asia, such as Urdu ghazals. 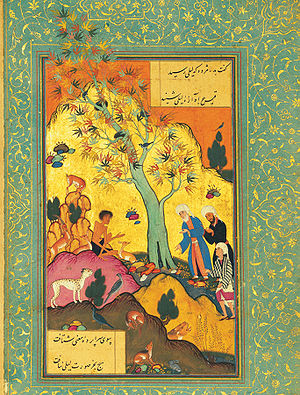 Majnun in the wilderness

The story of Layla and Majnun was known in Persian at early as the 9th century. Two well known Persian poets, Rudaki and Baba Taher, both mention the lovers.[2][3]

Although the story was somewhat popular in Persian literature in the 12th century, it was the Azeri masterpiece of Nizami Ganjavi that popularized it dramatically in Persian literature.[4] Nizami collected both secular and mystical sources about Majnun and portrayed a vivid picture of the famous lovers.[4] Subsequently, many other Persian poets imitated him and wrote their own versions of the romance.[4] Nizami drew influence from Udhrite love poetry, which is characterized by erotic abandon and attraction to the beloved, often by means of an unfulfillable longing.[5] Other influences include older Persian epics, such as Vāmiq u 'Adhrā, written in the 11th century, which covers a similar topic of a virgin and her passionate lover; the latter having to go through many trials to be with his love.[6]

In his adaptation, the young lovers become acquainted at school and fell desperately in love. However, they could not see each other due to a family feud, and Layla's family arranged for her to marry another man.[7] According to Dr. Rudolf Gelpke, "Many later poets have imitated Nizami's work, even if they could not equal and certainly not surpass it; Persians, Turks, Indians, to name only the most important ones. The Persian scholar Hekmat has listed no less than forty Persians and thirteen Turkish versions of Layli and Majnun."[8] According to Vahid Dastgerdi, "If one would search all existing libraries, one would probably find more than 1000 versions of Layli and Majnun."

In his statistical survey of famous Persian romances, Ḥasan Ḏulfaqāri enumerates 59 ‘imitations’ (naẓiras) of Layla and Majnun as the most popular romance in the Iranian world, followed by 51 versions of Ḵosrow o Širin, 22 variants of Yusuf o Zuleikha and 16 versions of Vāmiq u ʿAḏhrā.[3] 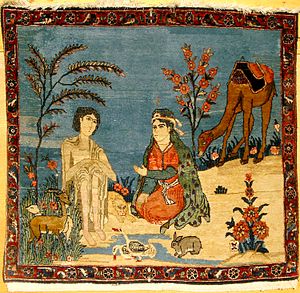 Azerbaijani folk art based on the Layla and Majnun novel by Nizami Ganjavi.

The story of Layla and Majnun passed into Azerbaijani literature. The Azerbaijani language adaptation of the story, Dâstân-ı Leylî vü Mecnûn (داستان ليلى و مجنون; "The Epic of Layla and Majnun") was written in the 16th century by Fuzûlî and Hagiri Tabrizi. Fuzûlî's version was borrowed by the renowned Azerbaijani composer Uzeyir Hajibeyov, who used the material to create what became the Middle East's first opera. It premiered in Baku on 25 January 1908. The story had previously been brought to the stage in the late 19th century, when Ahmed Shawqi wrote a poetic play about the tragedy, now considered one of the best in modern Arab poetry. Majnun lines from the play are sometimes confused with his actual poems.

A scene of the poem is depicted on the reverse of the Azerbaijani 100 and 50 manat commemorative coins minted in 1996 for the 500th anniversary of Fuzûlî's life and activities.[9]

The enduring popularity of the legend has influenced Middle Eastern literature, especially Sufi writers, in whose literature the name Layla refers to their concept of the Beloved. The original story is featured in Bahá'u'lláh's mystical writings, the Seven Valleys. In Arabic language, Layla name means "night," and is thought to mean "one who works by night." This is an apparent allusion to the fact that the romance of the star-crossed lovers was hidden and kept secret. In the Arabic language, the word Majnun means "a crazy person." In addition to this creative use of language, the tale has also made at least one linguistic contribution, inspiring a Turkish colloquialism: to "feel like Mecnun" is to feel completely possessed, as might be expected of a person who is literally madly in love.

This epic poem was translated into English by Isaac D'Israeli in the early 19th century allowing a wider audience to appreciate it.

Layla has also been mentioned in many works by Aleister Crowley in many of his religious texts, perhaps most notably, in The Book of Lies.

In India, it is believed that Layla and Majnun found refuge in a village in Rajasthan before they died. The graves of Layla and Majnun are believed to be located in the Bijnore village near Anupgarh in the Sriganganagar district. According to rural legend there, Layla and Majnun escaped to these parts and died there. Hundreds of newlyweds and lovers from India and Pakistan, despite there being no facilities for an overnight stay, attend the two-day fair in June.

Another variation on the tale tells of Layla and Majnun meeting in school. Majnun fell in love with Layla and was captivated by her. The school master would beat Majnun for paying attention to Layla instead of his school work. However, upon some sort of magic, whenever Majnun was beaten, Layla would bleed for his wounds. The families learnt of this strange magic and began to feud, preventing Layla and Majnun from seeing each other. They meet again later in their youth and Majnun wishes to marry Layla. Layla's brother, Tabrez, would not let her shame the family name by marrying Majnun. Tabrez and Majnun quarreled and, stricken with madness over Layla, Majnun murdered Tabrez. Word reached the village and Majnun was arrested. He was sentenced to be stoned to death by the villagers. Layla could not bear it and agreed to marry another man if Majnun would be kept safe from harm in exile. Her terms were accepted and Layla got married, but her heart still longed for Majnun. Hearing this, Layla's husband rode with his men into the desert to find Majnun. Upon finding him, Layla's husband challenged Majnun to the death. The instant her husband's sword pierced Majnun's heart, Layla collapsed in her home. Layla and Majnun were buried next to each other as her husband and their fathers prayed to their afterlife. Myth has it that Layla and Majnun met again in heaven, where they loved forever.

There was no magic involved. Why would a true lover have to resort to magic, especially when Qays was more beautiful and pretty than his beloved Layla, at least when they initially met and fell in love. As they grew up, Qays beauty remained as perfect as it was in his childhood but Layla's beauty grew and grew until she surpassed her lover. Layla was called the miraculous creation. The perfect one for the miraculous one. This was more than just a coincidence as they were not ordinary lovers but lovers who were made for each other.