The Leys School is a co-educational Independent school. The Leys is located in Cambridge, England, and is a day and boarding school for about 560 pupils between the ages of eleven and eighteen. The school is a member of the Headmasters' and Headmistresses' Conference.

The Nineteenth Century saw the founding of a large number of new schools in Britain, especially by the churches—including the Methodist church. Although there were already several leading schools that offered an education for the sons of Ministers of the church, some Methodists were asking also for schools to be established for sons of lay church members. The Methodist Conference set up a committee to look at the possibility of starting a new school at either Oxford or Cambridge.

Following several visits to Cambridge, they discovered that a twenty-acre (80,000 m2) site called "The Leys Estate" was being offered for sale. The estate was situated within easy reach of the city centre on the Trumpington Road, and it was close to the River Cam and to a number of Cambridge Colleges. The estate was acquired for the sum of £14,275 on 27 September 1872. The Reverend Doctor W.F. Moulton, who had been the secretary of the committee, was asked to become headmaster of the new school. The school opened on 16 February 1875 with sixteen boys, all from English Methodist families. After two years there were 100 pupils.

During the Twentieth Century, The Leys grew significantly and by 1930 the number of pupils had reached 271. During World War Two, the school temporarily moved to the Atholl Palace Hotel in Pitlochry, Scotland, returning to Cambridge in 1946. During the Cold War, the school was designated the auxiliary headquarters to the Regional Seat of Government for Cambridge in time of war.[1] Today the majority of the pupils are boarders and since the admission of girls to the Sixth Form in the 1980s, the school has become fully co-educational. It now accepts pupils from the age of eleven, rather than the age of thirteen as it was before.

Due to its location, the school is popular with Cambridge academics as a place to send their children, as well as a place to teach. Notably, Stephen Hawking sent his son to the school and has given a number of talks to its pupils since then.

Despite its Methodist traditions it has, for more than fifty years, been liberal on religion (although never secular). Many pupils received confirmation into the Church of England in the school chapel, and some others have had religious backgrounds from faiths other than the Christianity. Despite its religious liberalism, The Leys is predominantly a Christian school and they state openly that "The School’s Christian ethos lies at the heart of our education philosophy."

Pupils attend chapel services twice a week; a weekday service on a Friday afternoon plus Sunday services with the whole boarding community on a monthly basis with a weekly service with just their House on another specified day of the week. In addition, Holy Communion takes place once a term.

The school motto is "In Fide Fiducia" (Latin for "In Faith, Trust"), which is also the motto for its associated prep school, St Faith's School. The two schools make up The Leys and St. Faith's Foundation. The school song is Rev. B. Hellier's Χαίρετε.

Another point of interest is its limited entrance selection, as the school depends more on the flexibility of its staff and an assessment of a pupil's potential than exam grades.

This year the A*-C pass rate was 93.4 percent and the A*-E pass rate was 99.1 percent.[3] This is the second best A-level result ever for the school.[citation needed]

The main sports played by boys during the three terms are:

The school has a range of sports facilities spread across its 50-acre (200,000 m2) site. Other than the above-mentioned sports, the sports pitches include concrete, grass and AstroTurf tennis courts and a football pitch. The AstroTurf pitches are fully lit for night-time play. Indoor facilities include a fully equipped fitness centre, a sports hall for indoor sports such as badminton and netball, three squash courts and an aerobics studio. The school has a 25-meter heated indoor swimming pool and a rowing boathouse on the River Cam as well as several boats.

The Leys swims, competing against Eton (the only team to do so), and on a national level at the annual Bath Cup.

There is also a rowing club, with a boat house in position on the Cam. Along with sailing (at St. Ives), this is a minority sport, counted among "pitch games" (the school's name for non-team sports). Other pitch games, include squash, badminton, tennis, athletics, karate, Eton Fives and golf.

There are eleven separate Houses.

School is a thirteen to eighteen boys' boarding house with 30–35 boarders and 18-20 home boarders. School House is situated in the centre of the main campus overlooking the Thomson (Science) Building, Great Hall, Old Gym and Swimming Pool.

West is a thirteen to eighteen boys' boarding house with room for 45–48 boarders with 25–30 home boarders. West House is situated on the far side of the Campus overlooking the Astro Turf and the Humanities classroom block (Clapham Building).

North A is a boys' boarding house of 40–45 boarders and fifteen to twenty home boarders. It is situated close to the Main Library, Sixth Form Club, Tuck Shop and the Chapel. It overlooks the Upper Quadrangle.

Bisseker is part of the co-educational day house(known internally by its former name of B House). Initially a home-boarding house, it was converted into three separate day houses by Rev. John Barrett (8th Headmaster). Bisseker is named after the 3rd headmaster of the school and is on the top floor of the day house building.

Barker On the middle floor of the day house building, it overlooks the library, the maths department and the Upper Quadrangle and it excels in sports and maths. It was named after the 5th headmaster of the school.

Barrett At the bottom of the day house building. Typically around 50 people in each day house. Barrett is a strongly academic house, which also excels in music and sport, it was named after the 8th headmaster Rev John Barrett.

Dale is a girls' boarding house with 38-42 boarders and 17-20 home boarders. Dale House is situated in the centre of the main Campus and is close to Great Hall, Science Building, Music School and Swimming Pool.

Fen is a girls' thirteen to eighteen boarding house with 45–50 boarders and twenty to 25 home boarders. It is situated close to the Theatre and Rugg Technology Centre overlooking the main playing fields and Coe Fen at the western edge of the main Campus. 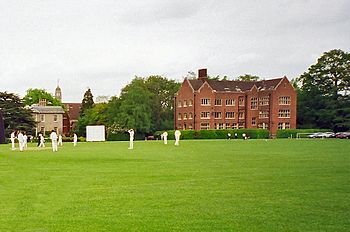 East House (right) and Headmaster's House (left) with the Chapel behind.

East is the Sixth Form boys' house with 27–30 boarders. Boys making direct entry into the Sixth Form are normally accommodated here. It overlooks the Deer Park and the Chapel to the North. There are also views over the main playing fields and sports complex to the south.

Granta is the Sixth Form girls' house with 30 boarders and up to two home boarders. Girls making direct entry into the Sixth Form are normally accommodated here. It is situated in the centre of the Campus overlooking the Chapel and Deer Park.

Moulton is the junior eleven to thirteen house for twenty to 25 boarders and 35–40 day pupils. The day facilities are situated on East of the campus overlooking the Deer Park and the Chapel to the north. The boarding house is a two-minute walk from the main gates in a Victorian town house. Moulton house was opened in 1998 and marked the first time that The Leys had allowed students aged eleven into the school. A section of East House was sacrificed to accommodate this new house (thus resulting in East being transformed into a purely Sixth Form boarding house).

The setting for popular novel and play Goodbye, Mr. Chips is believed to have been based on The Leys where author James Hilton was a pupil (1915–1918). Hilton is reported to have said that the inspiration for the protagonist, Chips, came chiefly from W.H. Balgarnie, one of the masters at The Leys (1900–30) who was in charge of the Leys Fortnightly (where Hilton's first short stories and essays were published). Over the years old boys have written to Geoffery Houghton, a master of The Leys for a number of years and a historian of the school, confirming the links between Chips and Balgarnie. As with Mr. Chips, Balgarnie died at the school, at the age of 82, having been linked with the school for 51 years and living his last years in modest lodgings opposite the school. Again, like Mr. Chips, Balgarnie was a strict disciplinarian, but would also invite boys to visit him for tea and biscuits.

Hilton wrote, upon Balgarnie's death that "Balgarnie was, I suppose, the chief model for my story. When I read so many other stories about public school life, I am struck by the fact that I suffered no such purgatory as their authors apparently did, and much of this miracle was due to Balgarnie." [3] Furthermore, the facial hair of one of the masters at The Leys earned him the nickname "Chops," a likely inspiration for Mr. Chips' name.

Known as Old Leysians, they include:

Old Leysians have their own old boys' sports clubs including the "Old Leysian Football Club," which in its hey day (during the 1930s) was one of the leading Rugby clubs in the London area. There is also an active "Old Leysian Golfing Society."