Leyton House Racing was a Formula One constructor that raced in the 1990 and 1991 seasons.

It was, in essence, a rebranding of the March team which returned to F1 in 1987. Leyton House, a Japanese real estate company, had been the team's marquee sponsor since that year, and went on to buy the team in 1989. Drivers Ivan Capelli and Maurício Gugelmin, who had both been driving for the March team from 1987 to 1989, continued on with the team under its new guise.

1990 proved to be a disaster from the beginning. The Leyton House CG901 chassis was unreliable and through the first six races of the season, the team had failed to score a single point and had failed to qualify numerous times; both Gugelmin and Capelli recorded DNQs for the Brazilian and Mexican Grands Prix (with Gugelmin also failing to qualify for the Monaco and the Canadian races). However at the race after the Mexico disaster, the French Grand Prix both cars not only qualified, but ran first and second for a period until Gugelmin's engine blew. Capelli actually led for much of the remainder of the race, before being caught by the eventual winner Alain Prost; still Capelli finished second, his only points finish and the team's only podium finish of the season. Gugelmin scored his only points of the season (and the last of his Formula 1 career) in the 1990 Belgian Grand Prix, leaving Capelli in the hated 7th place.

The team originally finished 7th in the Constructors' Championship, but were later promoted to 6th because Larrousse (irregularly) used Lola chassis. 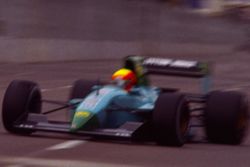 Leyton House switched engines for 1991, dropping the Judd V8 in favour of the new Ilmor V10 engine, hoping the new equipment and new faces in management would translate to success on the track. It proved to do exactly the opposite; Capelli retired from the first nine Grands Prix of the season before finally recording the team's first and only point by finishing 6th at the Hungarian Grand Prix. Gugelmin's best finish all season was 7th, which he achieved three times: in France, Portugal and Spain. 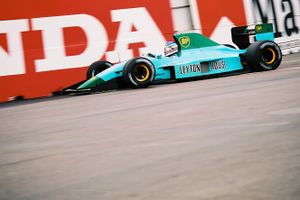 In September 1991, team owner Akira Akagi was implicated in a financial scandal involving the Fuji Bank and was arrested. The team was run by Akagi associate Ken Marrable but money was short and the cars continued to struggle to finish races.

With two races remaining in the season, Capelli quit his post to make way for test driver Karl Wendlinger who, like Michael Schumacher earlier in the season, was eased into F1 in a low-key deal made by Jochen Neerpasch of Mercedes-Benz, for whose Sauber-Mercedes sports car team he was driving at the time. In this context, it is notable that the Ilmor V10 was used by the Sauber team to which Wendlinger returned on its F1 debut in 1993 and that Ilmor became the F1 engine manufacturing arm of Mercedes-Benz.

Capelli would go on to sign for Ferrari for the 1992 season and Gugelmin left for Jordan.

The team was sold to a consortium including Marrable, former technical director Gustav Brunner and others. It was announced that the team would continue in Formula One but return to the name March F1 for 1992, perhaps in an aim to distance itself from the controversy surrounding Akagi and his Leyton House company. Wendlinger agreed to stay on as a full-time driver and he was joined by Paul Belmondo. While the March F1 team raced the complete 1992 season, neither of these drivers completed the full schedule as both Belmondo and Wendlinger left with five and two races remaining, respectively. They were replaced by Emanuele Naspetti and Jan Lammers.

Attempts to sell the team following the season failed and despite signing Lammers and Jean-Marc Gounon to drive in 1993, finances were exhausted and the team folded in early 1993.