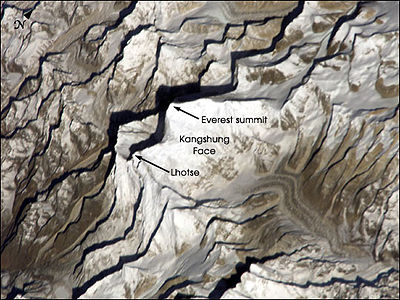 Kangshung Face as seen from orbit

An early attempt on Lhotse was by the 1955 International Himalayan Expedition, headed by Norman Dyhrenfurth. It also included two Austrians (cartographer Erwin Schneider and Ernst Senn) and two Swiss (Bruno Spirig and Arthur Spöhel), and was the first expedition in the Everest area to include Americans (Fred Beckey, George Bell, and Richard McGowan). The Nepalese liaison officer was Gaya Nanda Vaidya. They were accompanied by 200 local porters and several climbing Sherpas. After a brief look at the dangerous southern approaches of Lhotse Shar, they turned their attention, during September and October, to the West Cwm and the northwest face of Lhotse, on which they achieved an altitude of about 8,100 metres (26,600 ft). They were beaten back by unexpectedly strong wind and cold temperatures. Under Schneider's direction they completed the first map of the Everest area (1:50,000 photogrammetric). The expedition also made several short films covering local cultural topics, and made a number of first ascents of smaller peaks in the Khumbu region. [3]

The main summit of Lhotse was first climbed on May 18, 1956 by the Swiss team of Ernst Reiss and Fritz Luchsinger from the Swiss Mount Everest/Lhotse Expedition.[4] On May 12, 1970, Sepp Mayerl and Rolf Walter of Austria made the first ascent of Lhotse Shar.[5] Lhotse Middle remained, for a long time, the highest unclimbed named point on Earth; on May 23, 2001, its first ascent was made by Eugeny Vinogradsky, Sergei Timofeev, Alexei Bolotov and Petr Kuznetsov of a Russian expedition.

The Lhotse standard climbing route follows the same path as Everest's South Col route up to the Yellow Band beyond Camp 3. After the Yellow Band the routes diverge with climbers bound for Everest taking a left over the Geneva Spur up to the South Col, while Lhotse climbers take a right further up the Lhotse face. The last part to the summit leads through a narrow couloir until the Lhotse main peak is reached. 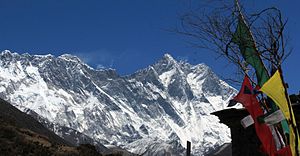 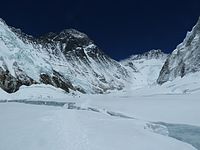 The western flank of Lhotse is known as the Lhotse Face. Any climber bound for the South Col on Everest must climb this 1,125 m (3,690 ft) wall of glacial blue ice. This face rises at 40 and 50 degree pitches with the occasional 80 degree bulges. High-altitude climbing Sherpas and the lead climbers will set fixed ropes up this wall of ice. Climbers and porters need to establish a good rhythm of foot placement and pulling themselves up the ropes using their jumars. Two rocky sections called the Yellow Band and the Geneva Spur interrupt the icy ascent on the upper part of the face. 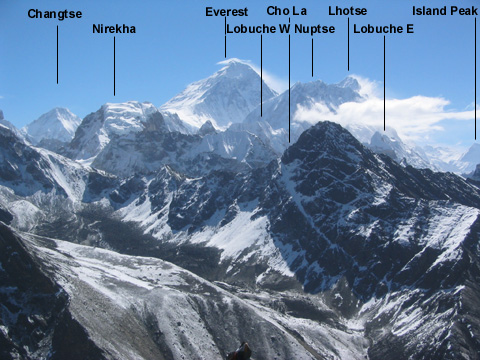 Annotated image of Lhotse and surroundings as seen from Gokyo Ri