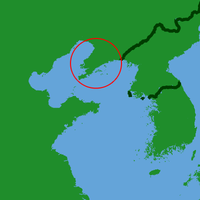 The peninsula lies in the north of the Yellow Sea, between the Bohai Sea to the west and Korea Bay to the east.

It forms the southern part of a mountain belt that continues northward in the Changbai Mountains. The part of the mountain range on the peninsula is known as the Qianshan Mountains, named after Qian Mountain in Anshan, which includes Dahei Mountain in Dalian.

The peninsula has two seaports: Dalian, which lies midway along the peninsula at its narrowest point, and Port Arthur/Lushun (now part of the greater Dalian City), which is located at its southernmost point. Lüshun/Port Arthur has a large lake-like naturally-protected harbor and a semi-sheltered outer roadstead, which made it very attractive to imperialist powers at the end of the nineteenth century. Dalny/Dairen/Dalian's harbor, on the southeastern coast of the peninsula, required greater investment, initially supplied by the Russians, but turned into a first-class city during the period of Japanese administration (1905–1945). The two ports are about 25 miles (40 km) apart by rail, but about 40 nautical miles (70 km) apart by sea. Lüshun is 550 rail miles south of the Manchurian railroad hub city of Harbin on the historic Southern Manchurian Railway (today's China Far East Railway (CER), the construction of which gave rise (in part) to the Russo-Japanese War of 1904-1905). 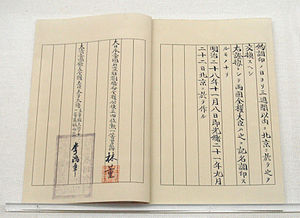 Convention of retrocession of the Liaotung Peninsula, 8 November 1895.

Liaodong came under the rule of the Gojoseon kingdom when they took it from the native tribes. In the late 4th century B. C., the Chinese State of Yan invaded and conquered this region from Gojoseon. Later on various states such as the Han Dynasty, Gongsun Yuan, Cao Wei, Western Jin, Former Yan, Former Qin, Later Yan, Goguryeo, Tang Dynasty, Balhae, Khitan, Jurchen, Yuan Dynasty, Ming Dynasty and Qing Dynasty ruled Liaoning.

"The Mu-jung clan of the Mongol Xianbei horde founded a new kingdom in Liaotung and Liaosi" in the fourth century.[1]

The peninsula was an important area of conflict during the First Sino-Japanese War (1894–1895), which the Japanese won. Defeat precipitated decline in the Chinese Empire which was exploited by colonial powers who extracted numerous concessions. The peninsula was ceded to Japan by the Treaty of Shimonoseki of 17 April 1895 but this was rescinded after the Triple Intervention of 23 April 1895 by Russia, France and Germany. In the aftermath of this intervention, the Russian government pressured the ruling Qing dynasty to lease Liaodong and the strategically important Lüshunkou (Port Arthur) for use by the Russian Navy.

As in the First Sino-Japanese War the Liaodong peninsula was the scene of major fighting in the Russo-Japanese War. As a consequence of the Treaty of Portsmouth (5 September 1905), which ended the Russo-Japanese War, both sides agreed to evacuate Manchuria and return its sovereignty to China, but Japan was given the lease for the Liaotung/Liaodong (Kwantung Leased Territory).