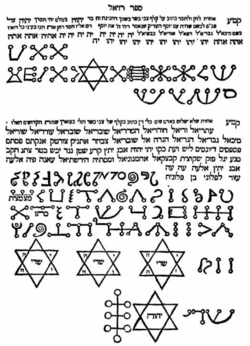 The book cannot be shown to predate the 13th century, but may in parts date back to Late Antiquity. Like other obscure ancient texts such as the Bahir and Sefer Yetzirah, the work has been extant in a number of versions. The tradition around the book attributes it to have been revealed to Adam by the angel Raziel. The title itself is mentioned in another magical work of late antiquity, The Sword of Moses. Critical historians regard it as a medieval work, most probably originating among the Chassidei Ashkenaz, as citations from it begin to appear only in the 13th century. Sections of it are no doubt older. The likely compiler of the medieval version is Eleazer of Worms, as "Sefer Galei Razia", which developed to what we have now as "Sefer Raziel HaMalakh", including more writings written by people of various theological opinions.[citation needed]

It draws heavily on Sepher Yetzirah and Sepher Ha-Razim. There are multiple manuscript versions, containing up to seven tractates. The printed version of Sefer Raziel is divided into five books, some of it in the form of a mystical Midrash on Creation. It features an elaborate angelology, magical uses of the zodiac, gematria, names of God, protective spells, and a method of writing magical healing amulets.

Book six of the Liber Razielis is based on the Sefer ha-Razim "Book of Secrets", with various additions including the "Prayer of Adam" of Sefer Adam.

The book becomes notorious in German Renaissance magic, named together with Picatrix as among the most abominable works of Nigromantia by Johannes Hartlieb. The prayer of Adam is paraphrased by Nicholas of Cues in two sermons (Sermo I, 4, 16.25; Sermo XX, 8, 10-13) and further made use of by Reuchlin in his De Arte Cabbalistica.[1] Konrad Bollstatter in the 15th century also shows awareness of the Latin version of the "Prayer of Adam" an interpolation in Cgm 252, although he replaces Raziel with Raphael and Seth with Sem.[2]

Adam in his prayer to God, apologized for listening to his wife Eve חוה, who was deceived by the snake into eating from the "Tree of Knowledge" - the עץ הדעת, according to the Book of Raziel, God sent the highest of the Angels, Raziel, to teach Adam the spiritual laws of nature and life on earth, including the knowledge of the planets, stars and the spiritual laws of creation.

The Angel Raziel teaches the power of speech, the energy contained within the 22 letters of the Hebrew alphabet, their combinations and meanings of names.

According to Jewish traditions, the angel Raziel was sent to earth to teach Adam, and due to the elevated soul of Abraham, Raziel returned to teach Abraham all the spiritual knowledge and spiritual laws. Raziel was sent to earth with specific purpose to teach Adam and Abraham the ways of Nature. The Book of Raziel explains everything from Astrology of the planets in our solar system, and explains how the creative life energy starts with a thought from the spiritual realms, transcending into speech and action in this physical world. The eternal divine creative life energy of this earth is love, the book explains the spiritual laws of birth, death, reincarnation of the soul, and many spiritual laws of "Change".

The Heptameron, ascribed to Petrus de Apono, is based on the Book of Raziel.[3]