The Liberal Party of Canada leadership election of 2009 was prompted by Stéphane Dion's announcement that he would not lead the Liberal Party of Canada into another election, following his party's defeat in the 2008 federal election in Canada. The Liberals, who captured just slightly over 26 per cent of the total votes, scored their lowest percentage in the party's history to that date.

The party's national executive met on November 8, 2008, to set rules for the contest, and chose a date and location for the convention. A biennial and leadership convention was held in Vancouver, British Columbia from April 30 to May 3, 2009, with the new leader being chosen on May 2.[1] Delegates to the convention were chosen from March 6–10, 2009 by those Liberal Party members who joined on or before February 6, 2009.

As a result of the 2008 Canadian parliamentary crisis, culminating in Conservative Prime Minister Stephen Harper's successful appeal on December 4, 2008, to Governor General Michaëlle Jean to prorogue Parliament until January 26, 2009, there were calls by a number of prominent Liberals, including Michael Ignatieff and Bob Rae, for the leadership election process to be accelerated, so that there would be an interim leader in place by the time that Parliament resumed. Former Deputy Prime Minister and former Finance Minister John Manley, writing in The Globe and Mail on December 6, 2008, called for Dion to resign immediately.[2] Dion issued a statement on December 8 agreeing to move up his resignation.

Rae and Ignatieff disagreed on how to accelerate the process, with Ignatieff favouring a vote by caucus on December 10, 2008, to select an interim leader who would then be confirmed as permanent leader in May 2009, and Rae calling for a One Member One Vote method involving the entire Liberal Party membership, to be conducted in January 2009.[3]

On December 8, 2008, Dominic LeBlanc withdrew from the race and threw his support to Michael Ignatieff.[4][5] That evening the party executive agreed to a compromise proposal that would widen the leadership consultation process to include riding association presidents, defeated election candidates and others but rejected Rae's OMOV proposal. On December 9, 2008, Bob Rae withdrew from the race, leaving Michael Ignatieff as the presumed victor.[6]

As well as ratifying Ignatieff's leadership with the support of 97% of delegates, the convention approved an amendment to the party's constitution to institute a One Member One Vote system for the election of future leaders.[7] A proposal to adopt a weighted system where 25% of the vote in leadership elections would be reserved for members of the party's youth wing was defeated.

The following candidates declared their intention to run for the leadership: 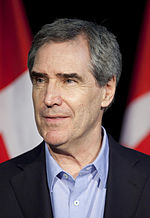 Ignatieff, 62, was the Member of Parliament for Etobicoke—Lakeshore since 2006; former leadership front-runner in 2006 before being defeated by Stéphane Dion on the final ballot; Deputy Liberal Leader since 2006.[8] 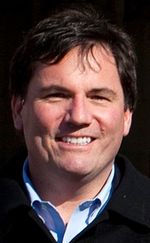 Leblanc, 41, was the Member of Parliament for Beauséjour since 2000, fluently bilingual Acadian with deep roots in the party. His father, Roméo, was press secretary to Pierre Trudeau, later an MP and cabinet minister, and eventually became Governor General.[11] On October 27, LeBlanc became the first candidate to declare his candidacy for the Liberal Party leadership.[12] On December 8, 2008, LeBlanc withdrew from the leadership race and endorsed Michael Ignatieff. 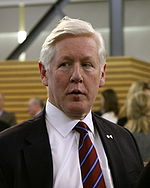 Rae, 60, had been the Member of Parliament for Toronto Centre since 2008; former Ontario New Democratic Party Premier of Ontario (1990-1995), NDP MP for Broadview-Greenwood (1979-1982); former federal Liberal leadership contender placing third in 2003. Rae had been under increasing pressure to bow out of the leadership contest. On December 9, 2008, Bob Rae officially withdrew from the race, leaving Michael Ignatieff the winner by default.[13]

Potential candidates who did not run