The Liberal Republican Party of the United States was a political party that was organized in Cincinnati in May 1872, to oppose the reelection of President Ulysses S. Grant and his Radical Republican supporters in the presidential election of 1872. The Liberal Republican party's candidate was Horace Greeley, longtime publisher of the New York Tribune. Following his nomination by the Liberal Republicans, Greeley was also nominated by the Democratic Party. Greeley was seen as an oddball reformer with little government experience and a long record of vehement attacks against the very Democrats he now called on for support. Greeley was defeated, receiving approximately 43% of the popular vote, and winning only in the states of Texas, Missouri, Kentucky, Tennessee, Georgia, and Maryland. Grant received 286 of the 352 electoral college votes.

File:1872 Cincinnati Convention of Liberal Republicans.jpg
Interior of the convention hall during the announcement of Horace Greeley as the party's nominee for president in 1872

The party began in Missouri in 1870 under the leadership of Carl Schurz and spread nationwide.[1] It had strong support from powerful Republican newspaper editors such as Murat Halstead of the Cincinnati Commercial, Horace White of the Chicago Tribune, Henry Watterson of the Louisville Courier-Journal, Samuel Bowles of the Springfield Republican and especially Whitelaw Reid and Horace Greeley of the New York Tribune.[2]

The Liberal Republicans thought that the Grant Administration, and the president personally, were fully corrupt. More important they thought that the goals of Reconstruction had been achieved. These goals were first the destruction of slavery and second the destruction of Confederate nationalism. With these goals achieved the tenets of republicanism demanded that federal military troops be removed from the South, where they were propping up allegedly corrupt Republican regimes. Many of the original founders of the Republican party and leaders of the Civil War joined the movement, including its nominee Horace Greeley, Charles Sumner of Massachusetts, Lyman Trumbull of Illinois, Cassius Marcellus Clay of Kentucky, and Charles Francis Adams of Massachusetts. The party platform demanded "the immediate and absolute removal of all disabilities imposed on account of the rebellion" and local self-government for the southern states. It regarded "a thorough reform of the civil service as one of the most pressing necessities of the hour."[3]

The Liberal Republicans believed in civil and political rights for African-Americans and argued that goal had been achieved. Now, they said, it was time for "amnesty", which meant restoring the right to vote and hold office to ex-Confederates.[4] A key Radical goal was to oust the ex-Confederates from power as a worthwhile goal for Reconstruction.

The Liberal Republican Party held a convention in Cincinnati in May of 1872. In Missouri, Democrats and Liberal Republicans had successfully defeated the incumbent Republican governor, and the Liberal Republicans hoped to nominate a presidential candidate who could likewise win the support of Democrats. Though Carl Schurz had founded the party, he was ineligible to run for president as he had born in Germany. Entering the convention, Supreme Court Justice David Davis, Senator Lyman Trumbull of Connecticut, and former Congressman Charles Francis Adams of Massachusetts were among the major candidates for the president. However, publisher Horace Greeley surprisingly won the nomination on the sixth ballot. Missouri Governor Benjamin Gratz Brown was chosen as the vice presidential nominee.[5]

The Liberal Republican Party fused with the Democratic Party in all states except for Louisiana and Texas. In many states, such as Ohio, the two parties nominated half of the slate of candidates. Some Democrats supported Charles O'Conor, who ran for President on the Straight-Out Democratic ticket. However, in the state elections held in the fall prior to the presidential election, the LR-D fusion tickets were easily defeated by the Republicans.[3]

Greeley died on November 29, 1872, before the presidential electors met on December 4 to cast the electoral votes. The Greeley electors were not able to coordinate their votes before meeting, but their action made no difference in the face of Grant's electoral college landslide.[6]

Although the Liberal Republican Party did not survive Greeley's death, several of its reforms materialized in the following decade. Reform Republicans accomplished the nomination and then election of Rutherford B. Hayes in 1876, who brought Reconstruction to an end and removed some of the more offensive of Grant's appointments. The Liberal Republican call for civil service reform was passed during the administration of President Chester Arthur.[3] However, Greeley's relatively poor performance (he fared worse than Horatio Seymour had in 1868) also put an end to the Democratic experiment with fusion tickets.[5]

Downey (1967) argues Greeley was nominated as a result of a crass political bargain imposed against the will of a convention that really wanted Charles Francis Adams. Men like Schurz supported Adams, but were not inexperienced political idealists, and professional politicians neither acted nor voted as a bloc, particularly after the collapse of a boom for David Davis, a collapse engineered by a group of leading reformist Republican editors. The shift of particular votes to Greeley was not decisive, but the feeling of the delegates that Adams could not win support among Irish workers, the Western masses, or Democratic voters.[7]

Lunde (1978) argues Grant supporters hailed the Civil War as a great triumph which had bound the United States into a united nation, linked not only by sentiment but by rapidly increasing networks of railroads. The Democrats and their Liberal Republican allies thought the war was a tragedy, recoiled against centralization, and sought to recapture the purity of prewar days through reconciliation and respect for the autonomy of the states. Greeley's benevolent image of nationalism was defeated by the centralizing, "blood and iron" concept of Grant.[8]

McPherson (1972) argues that three-quarters of ex-abolitionists favored Grant, although such antislavery Republicans as Charles Francis Adams, Carl Schurz, and Charles Sumner were key supporters of Greeley. Focused on the welfare of the freedmen, abolitionists were appalled by Greeley's formula for cooperation with "better class" southern whites by granting amnesty to all Confederates and adopting a hands-off policy toward the South. They supported Grant in the belief that his southern policy promised the best protection for the African Americans. Most abolitionists believed that, moral suasion having failed earlier, true equality could be achieved only through relentless law enforcement.[9]

Slap (2006) redeems the reputation of the Liberal Republicans from allegations of opportunism (as presented by Ari Hoogenboom), of elitism (as presented by John G. Sproat), and racism as presented by the Neoabolitionists. He joins Heather Cox Richardson and David Quigley in concluding that Reconstruction ended not because of politicized violence in the South, but because of the Northern decision that the war goals had been achieved and it would thwart republican ideals to continue Army rule of the South. 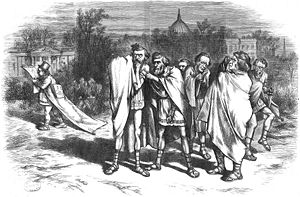 Liberal Republican “conspirators” in a political cartoon from Harper's Weekly of March 16, 1872.