After the murder of Caesar, Brutus and Cassius (the two main conspirators, also known as the Liberatores) had left Italy and taken control of all Eastern provinces (from Greece and Macedonia to Syria) and of the allied Eastern kingdoms. In Rome the three main Caesarian leaders (Antony, Octavian and Marcus Aemilius Lepidus), who controlled almost all the Roman army in the west, had crushed the opposition of the senate and established the second triumvirate. One of their first tasks was to destroy the Liberators’ forces, not only to get full control of the Roman world, but also to avenge Caesar’s death.

The triumvirs decided to leave Lepidus in Italy, while the two main partners of the triumvirate (Antony and Octavian) moved to Northern Greece with their best troops (a total of 28 legions). In 42 BC Gaius Norbanus Flaccus and Decidius Saxa, were sent by the triumvirs with an eight legions strong advance guard into Macedonia against the murderers of Julius Caesar. In the neighborhood of Philippi, Norbanus and Saxa met the combined advancing troops of Cassius and Brutus. As they were outnumbered, Norbanus and Saxa occupied a position near Philipi which prevented the republicans from advancing any further. By a ruse, Brutus and Cassius managed to make Norbanus leave this position, but Norbanus discovered the ruse in time to recover the dominating position. When Brutus and Cassius managed to outflank them, Norbanus and Saxa retreated toward Amphipolis. When Marc Antony and the bulk of the triumvir's troops arrived (minus Octavian, who was delayed at Dyrrachium because of ill health), they found Amphipolis well guarded and Norbanus was left in command of the town.

The Liberators' army had seventeen legions (eight with Brutus and nine with Cassius, while two other legions were with the fleet). Only two of the legions were at full ranks, but the army was reinforced by levies from the Eastern allied kingdoms. Appian reports that the army mustered a total of about 80,000 foot-soldiers. Allied cavalry included a total of 17,000 horsemen, including 5,000 bowmen mounted in the Eastern fashion. This army included Caesar's old legions present in the East (probably with XXVII, XXXVI, XXXVII, XXXI and XXXIII legions), thus much of the Liberators' army was made up of former Caesarean veterans. However, at least the XXXVI legion consisted of old Pompeian veterans, enrolled in Caesar's army after the Battle of Pharsalus. The loyalty of the soldiers who were supposed to fight against Caesar’s heir was a delicate issue for the Liberators. Cassius tried in all ways to reinforce the soldiers' loyalty both with strong speeches ("Let it give no one any concern that he has been one of Caesar's soldiers. We were not his soldiers then, but our country's") and with a gift of 1,500 denari for each legionary and 7,500 for each centurion.

The Battle of Philippi consisted of two engagements in the plain to the west of the ancient city of Philippi. The first occurred in the first week of October; Brutus faced Octavian, while Antony's forces were up against those of Cassius. At first, Brutus pushed back Octavian and entered his legions' camp. But to the south, Antony defeated Cassius, and Cassius, hearing a false report of Brutus' failure, committed suicide. Brutus rallied Cassius's remaining troops and both sides ordered their army to retreat to their camps with their spoils, and the battle was essentially a draw, but for Cassius' suicide.

Naval battle and other developments

On the same day of the first battle of Philippi the Republican fleet, patrolling the Ionian Sea was able to intercept and destroy the triumvirs reinforcements (two legions and other troops and supplies led by Gnaeus Domitius Calvinus). Thus, the strategic position of Antony and Octavian became quite serious, since the already depleted regions of Macedonia and Thessaly were unable to supply their army for long, while Brutus could easily receive supplies from the sea. The triumvirs had to send a legion south to Achaia to collect more supplies. The morale of the troops was boosted by the promise of further 5,000 denarii for each soldier and 25,000 for each centurion.

On the other side, however, the Liberators’ army was left without his best strategic mind. Brutus had less military experience than Cassius and, even worse, he could not obtain the same sort of respect from his allies and his soldiers, although after the battle he offered another gift of 1,000 denarii for each soldier.

In the next three weeks, Antony was able to slowly advance his forces south of Brutus’s army, fortifying a hill close to the former Cassius’ camp, which had been left unguarded by Brutus. To avoid being outflanked Brutus was compelled to extend his line to the south, parallel to the via Egnatia, building several fortified posts. Brutus' defensive position was still secure, holding the high ground with a safe line of communication with the sea and he still wanted to keep the original plan of avoiding an open engagement while waiting for his naval superiority to wear out the enemy. Unfortunately, most of his officers and soldiers were tired of the delaying tactics and demanded another attempt at an open battle. Probably both Brutus and his officers feared the risk of having their soldiers deserting to the enemy if they did not keep their ascendancy on the troops. Plutarch also reports that Brutus had not received news of Domitius Calvinus' defeat in the Ionian Sea. Thus, when some of the eastern allies and mercenaries started deserting, Brutus was forced to attack on the afternoon of October 23. 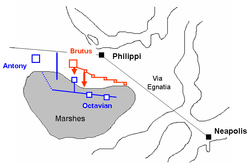 A second encounter, on 23 October, finished off Brutus's forces, and he committed suicide in turn, leaving the triumvirate in control of the Roman Republic. The battle resulted in close combat between two armies of well-trained veterans. Arrows or javelins were largely ignored and the soldiers packed into solid ranks fought face-to-face with their swords, and the slaughter was terrible. In the end, Brutus’ attack was repulsed, and his soldiers routed in confusion, their ranks broken. Octavian's soldiers were able to capture the gates of Brutus’ camp before the routing army could reach this defensive position. Thus, Brutus’ army could not reform, making the triumvirs’ victory complete. Brutus was able to retreat into the nearby hills with the equivalent of only 4 legions. Seeing that surrender and capture were inevitable, he committed suicide the next day.

Plutarch reports that Antony covered Brutus' body with a purple garment as a sign of respect, as they had been friends. He remembered that Brutus had placed as a condition for his joining the plot to assassinate Caesar that the life of Antony should be spared. Many other young Roman aristocrats lost their lives in the battle or committed suicide afterwards, including the son of the great orator Hortensius, Marcus Porcius Cato (the son of Cato the Younger), and Marcus Livius Drusus Claudianus (the father of Livia, who became Octavian’s wife). Porcia, Brutus’ wife is traditionally said to have killed herself by swallowing a red-hot coal when she received news of her husband's defeat, although the reliability of this anecdote is questionable, and there is evidence which suggests that Porcia died over a year before Brutus. Some of the nobles who were able to escape negotiated their surrender to Antony and entered his service (among them Marcus Calpurnius Bibulus and Marcus Valerius Messalla Corvinus). Apparently, the nobles did not want to deal with the young and merciless Octavian.

The remains of the Liberators’ army were rounded up and roughly 14,000 men were enrolled into the triumvirs army. Old veterans were discharged back to Italy, but some of the veterans remained in the town of Philippi, which became a Roman colony (Colonia Victrix Philippensium).

Antony remained in the East, while Octavian returned to Italy, with the difficult task of finding the land to settle a large number of veterans. Despite the fact the Sextus Pompeius was controlling Sicily and Domitius Ahenobarbus still commanded the republican fleet, the republican resistance had been definitively crushed at Philippi.