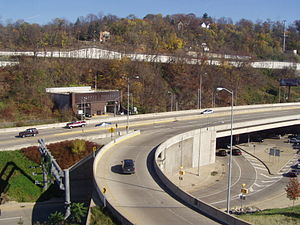 The Liberty Tunnels (also known as the Liberty Tubes) are a pair of tunnels located in Pittsburgh, Pennsylvania that allow motorists to travel between the South Hills of Pittsburgh and the city, through Mt. Washington. The tunnels were vital in the expansion of the South Hills suburbs by providing a direct route to the city, eliminating the time-consuming task of navigating around or over Mt. Washington and its inclines.

The tunnels were designed by Amos D. Neeld, who would also supervise the construction of the adjoining Liberty Bridge, which gives travelers a way to cross the Monongahela River after passing through the tunnels. The design was two vertical wall horseshoe profile tunnels, each consisting of two lanes of traffic and a 4 ft (1.2 m) sidewalk. The sidewalks, though minimally used and in disrepair, were removed during a renovation in the 1970s in order to widen and increase the height of the transit lanes.

Prior to the construction of the Liberty Tunnels, many other projects were proposed. One plan, from engineer W.M. Donley, did not involve constructing tunnels, but called for a deep cut through the mountain. This would eliminate the need for a tunnel, but the pitch was rejected. Many residents wanted tunnels to be built in Shalerville. Later in 1959, the Fort Pitt Tunnels were constructed very near this proposed area. Similarly, other residents wanted tunnels to be built in a valley behind Mt. Washington that led to Dormont and Mt. Lebanon. They would follow a low line to exit at Saw Mill Run. This was known as the Bell Tavern plan, which was modified to create the Liberty Tunnels. The final plan for the tunnels shared the southern Bell Tavern portal, but followed a higher line to emerge on the north face of Mt. Washington. This plan required the construction of a new bridge, which was to become the Liberty Bridge.

Booth and Flinn, Ltd. were awarded the contract to build the new tunnels in January 1919, and construction began shortly thereafter. On May 11, 1922, the boring of the tunnels was complete and in January 1924, the $6 million ($82.8 million in present dollars)[1] Liberty Tunnels were opened to traffic. However, the tunnels were not yet complete and lacked a major component necessary to the project: ventilation.

With help from the U.S. Bureau of Mines, tunnel engineers designed a system to ventilate the tunnels to accommodate the high traffic flow. In 1928, construction of four 200-foot (61 m) vertical shafts was completed to continuously provide fresh air to the tunnels. A plant located on top on the mountain was constructed to pump the fresh air through the shafts, which also tower 110 ft (34 m) above the plant. After the ventilation system was put into service, the traffic restrictions were lifted.

Following the completion of the Liberty Tunnels, the Liberty Bridge was completed and linked to the tunnels on March 27, 1928. The bridge and tunnel combination gave motorists and pedestrians a direct route to the city without traveling over or around Mt. Washington.

Pittsburgh, as seen through the northern end of the Liberty Tunnels in 1974

In 1941 it became the first tunnel in the world to provide AM radio reception throughout.[2]

Since August 1987 the tunnels have provided cellular phone reception.[3]