Albert's three children were from his relationship with his first wife, Mileva Marić, his daughter Lieserl being born a year before they married.

Pauline Einstein (née Koch) (8 February 1858 – 20 February 1920) was the mother of the physicist Albert Einstein. She was born in Cannstatt, Württemberg.[4] She was Jewish and had an older sister, Fanny, and two older brothers, Jacob and Caesar. Her parents were Julius Doerzbacher, who had adopted the family name Koch in 1842, and Jette Bernheimer. They were married in 1847. Pauline’s father was from Jebenhausen, now part of the city of Göppingen, and grew up in modest economic circumstances. Later, he lived in Cannstatt and together with his brother Heinrich, made a considerable fortune in the corn trade. They even became “Royal Württemberg Purveyor to the Court”. Their mother was from Cannstatt and was a quiet and caring person.

At 18 years old, Pauline married the merchant Hermann Einstein who lived in Ulm. They got married in Cannstatt on 8 August 1876. After the marriage, the young couple lived in Ulm, where Hermann became joint partner in a bed feathers company. Their son, Albert was born on 14 March 1879.[5] On the initiative of Hermann’s brother Jakob the family moved to Munich in the summer of 1880, where the two brothers together founded an electrical engineering company called [6] Einstein & Cie. The second child of Hermann and Pauline, their daughter Maria (called Maja), was born in Munich on 18 November 1881. Pauline Einstein was a well educated and quiet woman who had an inclination for the arts. She was a talented and assiduous piano player. She made Albert begin with violin lessons at the age of five.[7]

The factory of Hermann and Jakob was moved to Pavia, Italy in 1894. Hermann, Maria and Pauline moved to Milan in the same year and one year later, moved to Pavia. Albert stayed with relatives in Munich to continue his education there. The separation from her son was certainly difficult for Pauline. Unfortunately, the business was unsuccessful and the brothers had to abandon their factory in 1896. Though Hermann had lost most of his money, he founded (without his brother) another electrical engineering company in Milan. This time business was better. However, Hermann's health had deteriorated, and he died of heart failure in Milan on 10 October 1902.

In 1903, Pauline went to live with her sister Fanny and her husband Rudolf Einstein, a first cousin of Hermann, in Hechingen, Württemberg. Fanny's daughter, Elsa was to become the second wife of Albert in 1919. In 1910, Pauline moved with her sister, Fanny and her family to Berlin. She took on a job as housekeeper in Heilbronn, Württemberg in 1911. She lived with her brother Jacob Koch and his family in Zurich after 1914.

During World War I, Pauline fell ill with cancer. In 1918, when visiting her daughter, Maria and son-in-law, Paul Winteler in Luzern, Pauline was taken to the sanatorium Rosenau, due to her illness. At the end of 1919, Albert took his terminally-ill mother out of the sanatorium in Luzern and brought her to Haberlandstrasse 5, Berlin to stay with him and his second wife Elsa, where she later died. 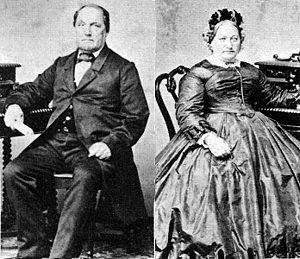 At the age of 14, Hermann attended the secondary school in the regional capital Stuttgart and was academically successful. He had a strong affection for mathematics, and would have liked to study in this or a related area, but as the financial situation of the family opposed further education, he decided to become a merchant and began an apprenticeship in Stuttgart.

Hermann married 18-year-old Pauline Koch in Cannstatt, Württemberg on 8 August 1876. After their wedding, the young couple lived in Ulm, where Hermann became joint partner in the bed feathers shop of his cousins, Moses and Hermann Levi. In Ulm, their son Albert was born on 14 March 1879. On the initiative of Hermann's brother Jakob, the family moved to Munich in the summer of 1880. There, the two brothers founded the electrical engineering company Einstein & Cie, with Hermann being the merchant and Jakob the technician. The second child of Hermann and Pauline, their daughter Maria, (called Maja) was born in Munich on 18 November 1881.

The Einsteins' electrical firm manufactured dynamos and electrical meters based on direct current. They were instrumental in bringing electricity to Munich. In 1885, they won the contract that provided DC lights to illuminate the Oktoberfest for the first time.

To their dismay, the Einstein brothers eventually lost a bidding war for the electrification contract of Munich to Siemens, which promoted the modern alternating current. Their fortunes took a decidedly downward turn from there.

The two brothers moved their company to Pavia, Italy in 1894. Hermann, Pauline and Maja moved to Milan in the same year and one year later moved to Pavia. Albert stayed with relatives in Munich to continue his education there.

Due to poor business, Hermann and Jakob had to burn their factory in 1896[according to whom?]. Though Hermann had lost most of their money, he founded another electrical engineering company in Milan, this time without his brother. He was supported financially by his relatives in this venture. Though business was better this time, Hermann was preoccupied with “worries due to the vexatious money”. He moved back to Germany in 1902.

Hermann Einstein died of heart failure in Milan in 1902. The grave is Civico Mausoleo Palanti inside Cimitero Monumentale di Milano.

Maria "Maja" Einstein and her older brother, Albert, were the two children of Hermann Einstein and Pauline Einstein (née Koch), who had moved from Ulm to Munich in June 1881, when Albert was one.[9] There Hermann and his brother Jakob had founded Einstein & Cie., an electrical engineering company.[10]

She attended elementary school in Munich from 1887 to 1894. She then moved with her parents to Milan, where she attended the German International School; Albert had stayed behind with relatives in Munich to complete his schooling. From 1899 to 1902, she attended a workshop for teachers in Aarau. After she passed her final exams, she studied Romance languages and literature in Berlin, Bern and Paris. In 1909, she graduated from University of Bern, her dissertation was entitled "Contribution to the Tradition of the Chevalier au Cygne and the Enfances Godefroi".

In the year following her graduation, she married Paul Winteler, but they were to be childless. The young couple moved to Luzern in 1911, where Maja's husband had found a job. In 1922, they moved to Colonnata near Florence in Italy.[11]

After the Italian leader Benito Mussolini introduced anti-Semitic laws in Italy, Albert invited Maja to emigrate to the United States in 1939 and live in his residence in Mercer Street, Princeton, New Jersey. Her husband was denied entry into the United States on health grounds.[10] Maja spent some pleasant years with Albert, until she suffered a stroke in 1946, and became bedridden.[12] She later developed progressive arteriosclerosis, and died in Princeton on 25 June 1951 four years before her brother.[12]

According to the correspondence between her parents, "Lieserl" was born in January 1902, a year before her parents married, in Novi Sad, Vojvodina, present day Serbia, and was cared for by her mother for a short time while Einstein worked in Switzerland before Marić joined him there without the child.

"Lieserl's" existence was unknown to biographers until 1986, when a batch of letters between Albert and Mileva were discovered by Hans Albert Einstein's daughter Evelyn.

Marić had hoped for a girl, while Einstein would have preferred a boy. In their letters, they called the unborn child "Lieserl", when referring to a girl, or "Hanserl", if a boy. Both "Lieserl" and "Hanserl" were augmentatives of the common German names Liese and Hans.

The first reference to Marić's pregnancy was found in a letter Einstein wrote to her from Winterthur, probably on 28 May 1901 (letter 36), asking twice about "the boy" and "our little son",[13] whereas Marić's first reference was found in her letter of 13 November 1901 (letter 43) from Stein am Rhein, in which she referred to the unborn child as "Lieserl".[14] Einstein goes along with Marić's wish for a daughter, and referred to the unborn child as "Lieserl" as well, but with a sense of humour as in letter 45 of 12 December 1901 "... and be happy about our Lieserl, whom I secretly (so Dollie[15] doesn't notice) prefer to imagine a Hanserl."[16]

The child must have been born shortly before 4 February 1902, when Einstein wrote: "... now you see that it really is a Lieserl, just as you'd wished. Is she healthy and does she cry properly? [...] I love her so much and don't even know her yet!"[17]

The last time "Lieserl" was mentioned in their extant correspondence was in Einstein's letter of 19 September 1903 (letter 54), in which he showed concern for her suffering from scarlet fever. His asking "as what is the child registered? [Adding] we must take precautions that problems don't arise for her later" may indicate the intention to give the child up for adoption.[18]

As neither the full name, nor the fate of the child are known, so far several theories about her life and death have been put forward:

Abraham Einstein (8 Apr 1808 – 21 Nov 1868), the son of Ruppert Einstein and Rebekha Overnauer, is the father of Hermann Einstein and grandfather of Hermann's son, Albert. Abraham married Helene Moos, both German Jews, in April 1839 in Buchau. Together, they had several children:

Surnames are Einstein and places are in Germany unless otherwise noted.

Daniel had 4 wives, but despite this he had only one child, either a son or stepson:

Leopold had one wife called Karoline (b. 1700 in Buchau, Germany) and had:

Abraham had one unknown wife and a son:

From marriage with Karoline Ehrlich he had: