Please see "lieutenant general" for other countries which use this rank

Lieutenant general (Lt Gen), formerly more commonly lieutenant-general, is a senior rank in the British Army and the Royal Marines, although the highest-ranking officer in the Royal Marines core structure at present is major general.[citation needed] It has a NATO code of OF-8, and is the equivalent of a multinational three-star rank; some British lieutenant generals sometimes wear three-star insignia, in addition to their standard insignia, when on multinational operations.

Lieutenant general is a superior rank to major general, but subordinate to a (full) general. The rank has a NATO rank code of OF-8, equivalent to a vice-admiral in the Royal Navy and an air marshal in the Royal Air Force (RAF) and the air forces of many Commonwealth countries. 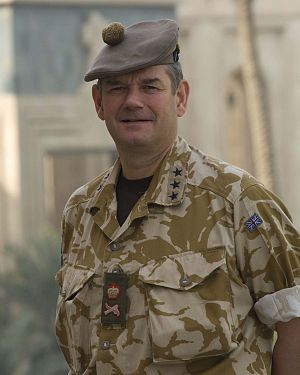