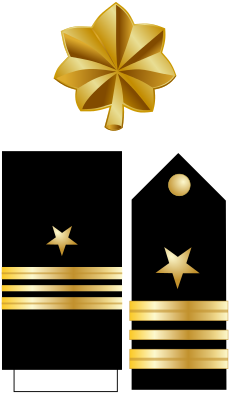 Lieutenant commander (also hyphenated lieutenant-commander and abbreviated Lt Cdr,[1] LtCdr.[2] or LCDR[3][4]) is a commissioned officer rank in many navies. The rank is superior to a lieutenant and subordinate to a commander. The corresponding rank in most armies (armed services) and air forces is major, and in the Royal Air Force and other Commonwealth air forces is squadron leader.

Most Commonwealth and other navies address lieutenant commanders by their full rank or the positions they occupy ("Captain" if in command of a vessel). The United States Navy, however, addresses officers by their full rank or the higher grade of the rank. For example, in day-to-day speech, a Lieutenant (junior grade) is abbreviated as "Lieutenant," and a Lieutenant Commander is abbreviated as "Commander."

The insignia worn by a Royal Navy lieutenant commander is two medium gold braid stripes with one thin gold stripe running in between, placed upon a navy blue/black background. The top stripe has the ubiquitous loop used in all RN officer rank insignia, except for the rank of Midshipman. The RAF follows this pattern with its equivalent rank of squadron leader.

Having fewer officer ranks than the army, the RN previously split some of its ranks by seniority (time in rank) to provide equivalence: hence a lieutenant with fewer than eight years seniority wore two stripes, and ranked with an army captain; a lieutenant of eight years or more wore two stripes with a thinner one in between, and ranked with a major. This distinction was abolished when the rank of lieutenant commander was introduced.

Throughout much of its existence, the British Royal Observer Corps (ROC) maintained a rank of observer lieutenant commander. The ROC wore a Royal Air Force uniform and their rank insignia appeared similar to that of an RAF squadron leader except that the stripes were shown entirely in black. Prior to the renaming, the rank had been known as observer lieutenant (first class).

In the Royal Canadian Navy, the rank is the naval rank equal to Major in the army or air force and is the first senior officer rank. Lieutenant Commanders are senior to Lieutenants (N) and to army and air force Captains, and are junior to Commanders and Lieutenant Colonels.[5]

There are two insignia used by USN and USCG Lieutenant Commanders. On service khakis and all working uniforms, lieutenant commanders wear a gold oak leaf collar device, similar to the ones worn by Majors in the USAF and Army, and identical to that worn by majors in the Marine Corps. In all dress uniforms, they wear sleeve braid or shoulder boards bearing a single gold quarter-inch stripe between two gold half-inch strips (nominal size). Above or inboard of the stripes, they wear their speciality insignia (i.e., a star for officers of the line, single oak leaf for medical with silver acord for Medical Corps, crossed oak leaves for Civil Engineer Corps, United States shield for Coast Guard, etc.).[7]

This rank is also used on in Pakistan Navy. 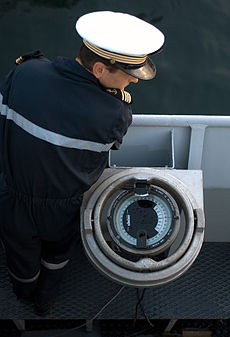 The corresponding rank in the German Navy, Italian Navy, Argentine Navy, Brazilian Navy, French Navy, Spanish Navy and most other French and Spanish-speaking countries is corvette captain. The corresponding rank in the Estonian Navy and Portuguese Navy is captain lieutenant, in the Russian Navy it is "captain of the third rank" (капитан 3-го ранга), and in the Polish Navy it is komandor podporucznik,[5] the equal rank in Finnish Navy is komentajakapteeni, "commander captain", in Finnish service the rank insignia of komentajakapteeni is three stripes of equal width. The insignia of kapteeniluutnantti, the rank immediately below the former, is one thin stripe between two wider ones, which could cause some confusion among the naval personnel of other nations.