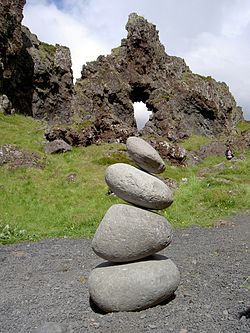 Lifting stones are common throughout northern Europe, particularly Scotland, Wales, Iceland (where it is referred to as steintökin), Scandinavia and North West England in the area that was once inhabited by the Welsh, now modern day Cumbria. They were usually heavy local stones, without any modification, with the challenge being to lift such a stone, proving your strength. Some of the stones are in fact so heavy that there has been no authenticated lift in modern times, only legend. Recently, lifting stones have often been incorporated into the World's Strongest Man competitions, using various cast, found, or established challenge stones such as The Husefell Stone. They also do a stylized version of an event derived from an ancient contest, in which men would see who could load the heaviest stone onto a stone wall, derived from building such a wall, where they are known as Atlas Stones.[1]

In Iceland, lifting stones were categorised into the

They were traditionally used to qualify men for work on fishing boats, with the hálfdrættingur being the minimum weight a man would have to lift onto a ledge at hip-height to qualify. One such set of stones can be found on the beach of Djúpalónssandur at the foot of Snæfellsjökull. One of the most famous Icelandic stones is the Husafell Stone which weighs 190 kg (418 lb).

Every settlement in the Faroe Islands used to have its local lifting stone, called a hav,[2] derived from the verb hevja which means 'to lift'. Visiting men would be challenged by the locals to show off their strength.

Clach cuid fir, Gaelic for "Manhood Stones", originate from Scotland. Manhood stones were used for centuries as tests of strength in Scotland. Typically, a young man was welcomed into manhood when he was able to lift his clan's testing stone to waist height.[3] There are many examples in Scotland including:[4]

Both the McGlashen Stones and the Dinnie Stones have been used in numerous Strongman competitions since the 1980s including World's Strongest Man and Pure Strength.

A Clach-ultaich ([kʰlˠ̪axˈulˠ̪t̪ɪç], plural clachan-ultaich) is another type of lifting stone found in Scotland. Examples are:

According to Y pedair Camp ar Hugainyn Welsh for "24 feats of a welshman". Stone lifting was a common practice. Usually performed by young boys as a right of passage into man hood. It is said that once a young boy can lift the stone to his waist he was considered a man. Furthermore the stone was used to develop a man's strength in preparation for battle.

There were no set size, shape or weight for each stone. Stones varied, depending on what was available within the locality or by what was selected by the king of each region.

The kings Teulu "personal army" were selected from each village or town within his borders, based upon a mans ability to Lift Stones, Run, Jump, Leap, Wrestle, Fence, Shoot a bow and arrow and throw a spear.

To date a lifting stone "Y Garreg Orchest" is still in place in the town of Criccieth in Gwynedd, North Wales. Competitors travel from all across the UK to attempt to lift this mammoth stone. In 2015 there was one successful lift of the 28 stone Goliath.

Stone lifting is also a traditional sport in the Basque Country involving the lifting of stone, called harri jasoketa. There are several varieties, particularly using round stones and rectangular ones. The goal can be raising and dropping a stone of certain weight as many times as possible or simply raising a heavy stone once in order to beat an existing record.

The stone carry or stone walk is a traditional Scottish and Icelandic athletic event involving the carrying of large stones down the field of competition. This type of event has become very popular in the sport of strongman, with many variations being used in numerous competitions all over the world.

The rules are simple: the competitors each pick up a pair of very heavy stones equipped with iron handles, and they each carry the paired stones as far down the field as they can. The length of the field varies depending on the site, but a hundred feet is typical. This event is also known as the farmer's walk.

If two or more competitors carry the stones the entire length of the field, heavier stones are then used. At the New Hampshire Highland Games, the record carry (as of 2004[update]) is a pair of stones weighing 508 pounds (230 kg) carried just under 100 feet (30 m).

The game probably originated as an outgrowth of the need to clear stones from agricultural fields to create clearance cairns.

A similar Basque sport is the ontzi eramatea where the weights were originally milk canisters.