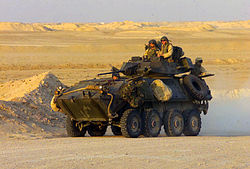 They perform their methods as special motorized, infantry-based reconnaissance units as they are equipped with LAV-25s to quickly penetrate enemy lines and locate and/or harass any enemy forces to determine their size, strengths, location, and any other pertinent information requested of the Marine commanders.

“The LAR [Light Armored Reconnaissance] battalion performs combined arms reconnaissance and security missions in support of the GCE [Ground Combat Element]. Its mission is to conduct reconnaissance, security and economy of force operations, and, within its capabilities, limited offensive or defensive operations that exploit the unit’s mobility and firepower.” (Marine Corps Warfighting Publication MCWP 3-14, page 1-1)

The LAR Battalions were formed from the remnants of the Scout (Tank) companies in Marine tank battalions that existed during World War II.[1] The early tank scouts would reconnoiter ahead of enemy forces and conduct reconnaissance-in-force while riding on top of the tanks.[2] They became reliable as they were able to be projected into enemy territory, harass the enemy, and withdraw back to friendly lines, reporting their newfound intelligence. By the time World War II ended, the scout companies formed into scout and snipers platoons and Division Reconnaissance companies.

In the early 1980s, the Light Armored Battalions were created to fill in the necessary assets to the infantry regiments. Prior to the formation of LAR Battalions assigned to the Fleet Marine Force (FMF), there was one combat-ready LAV-25 equipped unit within the Marine Corps. In 1983, the First Light Armored Vehicle Battalion (1stLAVB), was created at Marine Corps Air and Ground Combat Center (MCAGCC) Twentynine Palms, California.

LAR Battalions are tasked with screening for Regimental Combat Teams (RCT) or Battalion Landing Teams (BLT) are not to get decisively engaged. However during OIF many elements of 1st, 2nd, and 3rd LAR Battalions were the lead element in the push to Baghdad Note: Task Force Tripoli