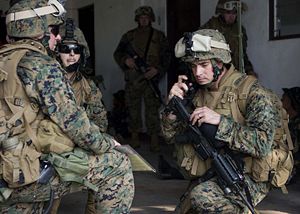 The Lightweight Helmet (LWH) is the U.S. Marine Corps replacement for the PASGT combat helmet.

As it is nearly identical to untrained eyes in shape to the PASGT, and outside the Marine Corps it is still called the Fritz helmet or K-pot (due to its resemblance to the German Stahlhelm). Though heavier than the Army's Advanced Combat Helmet, its larger size also offers more protection and is lighter than the PASGT. Featuring a V-neck strap and improved fit, it is much more comfortable than the PASGT.[1]

The LWH entered service in late 2003 and completely replaced the PASGT by 2009.

As with the PASGT helmet, it is an olive drab color, and can be fitted with cloth helmet covers in desert and woodland MARPAT camouflage patterns, as well as a mounting bracket on the front for any sort of night vision device, such as the AN/PVS-7 night vision goggle or AN/PVS-14 monocular night vision device (MNVD). Marines currently can be issued with a sling suspension or a pad suspension to fit the inside of the helmet to the head.[2] A nape protection system adds ballistic protection to the rear of the head was also added as to reduce strain and improve comfort to the back of the neck.[3]

The Marine Corps placed its first order for the Enhanced Combat Helmet in July 2013, and will be fielded to deployed Marines before the end of 2013. The ECH is planned to equip all deployed Marines, while the Lightweight Helmet will still be used for training and noncombat purposes.[4]