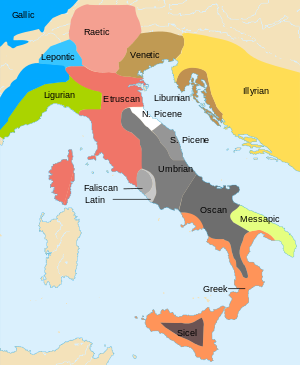 The Ligures (singular Ligus or Ligur; English: Ligurians, Greek: Λίγυες) were an ancient Indo-European people who gave their name to Liguria, a region of north-western Italy.[1] They spoke the old Ligurian language which is generally believed to have been an Indo-European language with both Italic and particularly strong Celtic affinities.

Because of the strong Celtic influences on their language and culture, they were known already in antiquity as Celto-Ligurians (in Greek Κελτολίγυες, Keltolígues).[2]

According to Plutarch they called themselves Ambrones, which could indicate a relationship with the Ambrones of northern Europe.[3]

Strabo tells us that they were of a different race from the Celts (by which he means Gauls) who inhabited the rest of the Alps, though they resembled them in their mode of life.[4]

Aeschylus represents Hercules as contending with the Ligures on the stony plains near the mouths of the Rhone, and Herodotus speaks of Ligures inhabiting the country above Massilia (modern Marseilles, founded by the Greeks). Thucydides also speaks of the Ligures having expelled the Sicanians, an Iberian tribe, from the banks of the river Sicanus, in Iberia.[5] The Periplus of Pseudo-Scylax describes the Ligyes (Ligures) living along the Mediterranean coast from Antion (Antibes) as far as the mouth of the Rhone; then intermingled with the Iberians from the Rhone to Emporion in Spain.[6] People with Ligurian names were living south of Placentia, in Italy, as late as 102 AD.[3]

In the 19th century, the Ligures' question got the attentions of not a few scholars. Amédée Thierry, a French historian, linked them to the Iberians,[7] while Karl Müllenhoff, professor of Germanic antiquities at the Universities of Kiel and Berlin, studying the sources of the Ora maritima by Avienus (a Latin poet who lived in the 4th century AD, but who used as source for his own work a Phoenician Periplum of the 6th century BC),[8] held that the name Ligurians generically referred to various peoples who lived in Western Europe, including the Celts, but thought the real Ligurians were a Pre-Indo-European population.[9] Arturo Issel, a Genoese geologist and paleontologist, who considered them direct descendants of the Cro-Magnon men that lived throughout Gaul from the Mesolithic.[10]

Dominique-François-Louis Roget, Baron de Belloguet, claimed a "Gallic" origin.[11] During the Iron Age the spoken language, the main divinities and the workmanship of the artifacts unearthed in the area of Liguria (see the many torcs) were of Celtic type.[12]

In favor of an Indo-European origin thesis was Henri d'Arbois de Jubainville, 19th-century French historian, who argued the Ligurians were the earliest Indo-European speakers of the European West. De Jubainville's Ligurian hypothesis soon found its reflection in a body of contemporary philological work. Later dubbed Celto-Ligurian, de Jubainville's theory was much expanded in the second edition of his initial study and thereafter soon penetrated even archaeological treatments. It was associated by prehistorians with the funnel-beaker "people and expanded to cover much of Central Europea (cf. prominently, still McEvedy 1967:29ff.). Moreover, Julius Pokorny even adopted Celto-Ligurian as the basis for his Illyrian theory, linking it to an array of similar evidence from Eastern Europe, and now the Ligures-Illyrians were associated with the prehistoric Urnfield peoples.[13]

According to a traditional belief, the Ligures represent the northern branch of a very old and different ethno-linguistic layer from the protolatin one, which would have occupied the Tyrrhenian area from Liguria to Sicily (Ligurian/Sicanian layer).[14]

Little is known of the Ligurian language. Only personal names and place-names remain (with typical suffixes -asca or -asco = desinence for village, not to be confused with Celtic ending -brac, possibly meaning swamp). It appears to be an Indo-European branch with both Italic and particularly strong Celtic affinities.

Lucan in his Pharsalia (c. 61 AD) described Ligurian tribes as being long-haired, and their hair a shade of auburn (a reddish-brown):

First of the long-haired nations, on whose necks
Once flowed the auburn locks in pride supreme.[15] 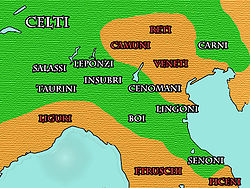 The Ligures seem to have been ready to engage as mercenary troops in the service of others. Ligurian auxiliaries are mentioned in the army of the Carthaginian general Hamilcar in 480 BC.[16] Greek leaders in Sicily continued to recruit their mercenary forces from the same quarter as late as the time of Agathocles.[5][17]

The Ligures fought long and hard against the Romans, but as a result of these hostilities many were displaced from their homeland[18] and eventually assimilated into Roman culture during the 2nd century BC. Roman sources describe the Ligurians as smaller framed than the Gauls, but physically stronger, more ferocious and fiercer as warriors, hence their reputation as mercenary troops.

Numerous tribes of Ligures are mentioned by ancient historians, among them:

In the island of Corsica and far northeast Sardinia dwelt a group of tribes called Corsi, although they are classified as nuragic tribes (that may have been related to the Iberians, the Aquitanians or to the Etruscans) they also may have been a group of ligurian tribes, like the Ilvates in the neighboring Ilva (Elba) island (nuragic tribes, in Corsica and Sardinia, were not necessarily from the same ethnic origin or spoke the same language):