Emily Lilian Whiting (October 3, 1847 – April 30, 1942) was an American journalist, poet and story-writer from New York. Her father was Illinois State Senator Lorenzo D. Whiting. She served as literary editor of the Boston Evening Traveller (1880-1890), editor-in-chief of the Boston Budget (1890–93), and afterward, spent much of her time in Europe. Whiting was the author of "The World Beautiful," "From Dreamland Sent," a book of poems, "A Study of the Life and Poetry of Elizabeth Barrett Browning," "A Record of Kate Field," "The World Beautiful in Books," "Boston Days," "Florence of Landor," "The Outlook Beautiful," "Italy, the Magic Land," "Paris the Beautiful," and others.[1]

Emily Lilian Whiting was born in Niagara Falls (or Olcott, New York), in October 3, 1847; October 3, 1859 is also noted, as she often claimed it.[2][1][3] Her parents were Hon. Lorenzo Dowe and Lucretia Clement Whiting. Her ancestry include Rev. William Whiting, the first Unitarian minister of Concord, Massachusetts, in the early part of the 17th century. Her paternal grandmother was born Mather, and was a direct descendant of Cotton Mather. On her mother's side, her ancestry was also from New England, largely of the Episcopal clergy. While Whiting was an infant, the parents removed to Illinois. For some time, the parents served as principals of the public schools in Tiskilwa, Illinois, a village near their farm. Subsequently, the father became the editor of the Bureau County Republican, published in Princeton, Illinois. In that work, he was assisted by his wife. Later, he was sent to the Illinois General Assembly as representative from his district, and, after some years in the lower house, was elected State senator, in which capacity he served for 18 consecutive years. He was one of the framers of the constitution of Illinois. Little was left to the children after the death of Senator Whiting, in 1889. The mother died in 1875. [4]

Books and periodicals abounded in the family home. Whiting, the only daughter, was educated largely under private tuition and by her parents. She was fairly steeped in the best literature of the world. She inherited from her mother much of the temperament of the mystic and the visionary, and her bent was always towards books and the world of thought.[4] She attended the Mount Carroll Seminary (later known as Shimer College) in Illinois.[5]

Whiting went to St. Louis, Missouri, in 1876, to pursue a career in journalist, remaining there for three years. In the spring of 1879, through the acceptance of two papers on Margaret Fuller, Murat Halstead gave Whiting a place on his paper, the Cincinnati Commercial. After a year in Cincinnati, she went, in the summer of 1880, to Boston, Massachusetts, where she soon began to work for the Boston Evening Traveller as an art writer. To her writing on the art exhibitions and studio work in Boston and New York City, she added various miscellaneous contributions. In 1885, she was made the literary editor of the Traveller. In 1890, she resigned her place on the Traveller, and, three days after, she became the editor-in-chief of the Boston Budget. In that paper, she did the editorial writing, the literary reviews and a "Beau Monde" column.[6] 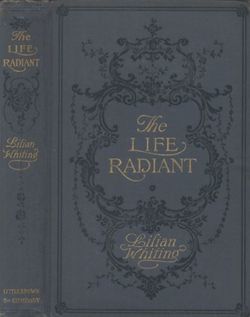 Cover of The Life Radiant by Lilian Whiting

For several years, she lived in the Brunswick Hotel, in Boston.[6] She was interested in the Bahai faith and Theosophy. Whiting died April 30, 1942.[2]