The Cut turns in a broad curve from Bow Locks, where the Lee Navigation meets Bow Creek; it then proceeds directly south-west for 2 miles (3.2 km) through the London Borough of Tower Hamlets to Limehouse Basin.

The Limehouse Cut was authorised by the River Lee Act, an Act of Parliament obtained on 29 June 1767, after the engineer John Smeaton identified the need to make several cuts and to replace existing flash locks on the river with pound locks. Two days after the Act was obtained, Thomas Yeoman was appointed as the company surveyor, and one of his first tasks was to investigate a route for the Limehouse Cut. It would provide a short-cut from the Lee Navigation at Bromley-by-Bow to the River Thames at Limehouse Basin, avoiding the tortuous curves of the lower reaches of the River Lea at Bow Creek, and the need to wait for the tide to make the long detour round the Isle of Dogs. The trustees accepted Yeoman's proposed route on 14 September 1767, which would terminate at Dingley's Wharf at Limehouse. The contract for the excavation of the cut was split into two, with Charles Dingley, owner of the wharf and also a trustee, getting the southern section up to Rose Lane and Jeremiah Ilsley getting the northern section to Bow Locks.[1]

The construction of Bromley Lock was let as a separate contract, which was awarded to a millwright from Bromley called Mr Cooper, who also built some of the locks on the Edmonton Cut. The lock into the Thames was designed by Mr Collard, another of the trustees, who produced a model and plan for the structure. The estimated cost was £1,547, but Collard has miscalculated the length, and it had to be increased by 16 feet (4.9 m), resulting in the estimate rising to £1,696. By 1769, barges were using part of the cut, and in May 1770 an opening date of 2 July was set. However, 60 feet (18 m) of brickwork failed, and fell into the canal, delaying the opening until 17 September. There were further problems in December, when a bridge collapsed, blocking the canal, but once the teething problems were resolved, traffic increased steadily. The cut was only wide enough for one barge, and in May 1772, a passing place was added, but by March 1773, the company had decided to widen the whole cut, so that barges could pass as any point. The contract for the work was given to Jeremiah Ilsley in June 1776, and the widened cut was operational from 1 September 1777, having cost £975.[2]

In 1854, Bromley Lock was moved and rebuilt to accommodate the larger barges which were using the navigation. A report written in 1888 noted that the lock was so full of rubbish that it did not maintain the water levels when the adjacent section was drawn down and in 1899 the company stated that the lock was only used when levels were drawn down for maintenance. The southern gates were removed soon afterwards, with the northern gates retained as a stop gate. Some remains of one of these gates can still be seen beside the floating towpath (for details of which see under Today).

At the south-western end of the cut, Britannia Lock was built in 1853. The gates were either side of Commercial Road bridge and were oriented such that a boat travelling from south-west to north-east would ascend in height.

The link was short-lived and in May 1864, it was filled in. A report written in 1893 noted that there was no evidence that the third set of gates at Britannia Lock had ever been used, that they had been removed around 1868 and that the other gates had also been removed because they were useless. Following the takeover of the canal by British Waterways in 1948, a vertical guillotine gate was fitted on the north side of Commercial Road bridge but this was removed in the 1990s.[3]

Bow Locks were originally semi-tidal, as high spring tides flowed over the top of the locks, altering the level in the Limehouse Cut and the southern section of the Lee Navigation. They were modified in 2000, when a flood wall and an extra pair of flood gates were installed, enabling the lock to be used at all states of the tide and stabilising the level of the cut.[4] Funding for the project was provided by the London Waterway Partnership.[5]

By the 1960s, the lock that connected the cut to the Thames was in need of replacement. It had been rebuilt in 1865, after the closing of the link to the Regents Canal Dock, and the design had included massive timber ties over the top of it to prevent bulging of the walls. These were eventually replaced with a steel cage, which served the same purpose.[6] Access to the lock from the cut and from the Thames was awkward, and the gates were operated by winches and chains as the site was too narrow to accommodate balance beams. At the time, there was significant commercial activity on the cut, which would have been severely disrupted by the construction of a new lock. The solution adopted was to reinstate a link to the Regents Canal Dock. The route used in the 1860s could not be reused, as it was now covered by buildings, and so a new length of canal, only about 200 feet (61 m) long, was built. The new link was opened on 1 April 1968, when the tug Miriam towed four lighters through it. The old lock was then filled in but one of the winches was saved and was put on display at Hampstead Lock.[7] 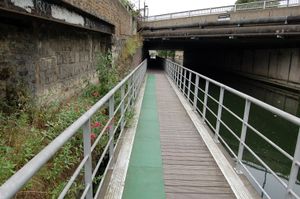 In 2003, an award winning 240-metre (262 yd) floating towpath was installed to link the existing towpath to Bow Locks.

Factories and warehouses line the Cut for the initial section of the cut above Limehouse Basin, but whereas they used to be serviced by the canal they are now serviced by roads. Most use of the canals is for pleasure, both on the water and beside the water on the towpaths. Regent's Canal, the Hertford Union Canal, the Lee Navigation and the Limehouse Cut form a four-sided loop, covering a distance of 5.5 miles (8.9 km), which can be walked or cycled.[8] The scenic towpaths cut across roads and railways in the area, providing a distinct viewpoint.

Access on foot along the Limehouse Cut was difficult in the area below the Blackwall Tunnel approach road, but was made easier as a result of an innovative scheme to create a floating towpath. This was opened in July 2003 and consisted of 60 floating pontoons, creating a 240-metre (262 yd) walkway complete with green glowing edges.[9]

The Cut is part of the Lee Navigation and is administered by the Canal & River Trust. It was built for sailing barges, and can accommodate vessels which are 88 by 19 feet (26.8 by 5.8 m). Headroom is limited to 6.75 feet (2.06 m).[10] The lock from Limehouse Basin to the Thames was originally a ship lock, but has been replaced with a smaller one. Although the area around Limehouse Basin and the original lock into the Thames have been extensively developed as part of the Docklands Regeneration scheme, the row of houses overlooking the lock, which were built in 1883 by the Lee Conservators, have been retained and refurbished, while the site of the lock is now a shallow pool.[6] At the end of the London 2012 torch relay, David Beckham arrived with the Olympic torch on a speedboat via the Limehouse Cut to the Olympic opening ceremony.