From Infogalactic: the planetary knowledge core
Jump to: navigation, search
For the fruit, see Lime (fruit). For the mathematical concept, see Limit (mathematics).

A limes (/ˈlaɪmiːz/;[1] Latin pl. limites) was a border defence or delimiting system of Ancient Rome. It marked the boundaries of the Roman Empire.

The Latin noun limes had a number of different meanings: a path or balk delimiting fields, a boundary line or marker, any road or path, any channel, such as a stream channel, or any distinction or difference.

The word limes was utilized by Latin writers to denote a marked or fortified frontier. This sense has been adapted and extended by modern historians concerned with the frontiers of the Roman Empire: e.g. Hadrian's Wall in the north of England is sometimes styled the Limes Britannicus, the frontier of the Roman province of Arabia facing the desert is called the Limes Arabicus, and so forth.

This was the traditional definition and usage of the term. It is now more common to accept that limes was not a term used by the Romans for the imperial frontier, fortified or not. This is a modern, anachronistic interpretation. The term became common after the 3rd century AD, when it denoted a military district under the command of a dux limitis.[2] Some experts suggested that the limes may actually have been called Munimentum Traiani, Trajan's Bulwark, referring to a passage by Ammianus Marcellinus according to which emperor Julian had reoccupied this fortification in 360 AD.[3]

The limites represented the border line of the Roman Empire at its greatest extent in the 2nd century AD. It stretched over 5,000 km from the Atlantic coast of northern Britain, through Europe to the Black Sea, and from there to the Red Sea and across North Africa to the Atlantic coast. The remains of the limites today consist of vestiges of walls, ditches, forts, fortresses and civilian settlements. Certain elements of the line have been excavated, some reconstructed, and a few destroyed. The two sections of the limes in Germany cover a length of 550 km from the north-west of the country to the Danube in the south-east. The 118 km long Hadrian's Wall was built on the orders of the Emperor Hadrian c. AD 122 at the northernmost limits of the Roman province of Britannia. It is a striking example of the organization of a military zone and illustrates the defensive techniques and geopolitical strategies of ancient Rome. The Antonine Wall, a 60 km-long fortification in Scotland, was started by Emperor Antoninus Pius in AD 142 as a defense against the "Barbarians" of the north. It constitutes the northwestern-most portion of the Roman Limes.

The most notable examples of Roman limites are:

A mediaeval limes is the Limes Saxoniae in Holstein.

The stem of limes, limit-, which can be seen in the genitive case, limitis, marks it as the ancestor of an entire group of important words in many languages, for example, English limit. Modern languages have multiplied its abstract formulations. For example, from limit comes the abbreviation lim, used in mathematics to designate the limit of a sequence or a function: see limit (mathematics). In metaphysics, material objects are limited by matter and therefore are delimited from each other. In ethics, men must know their limitations and are wise if they do.

An etymology was given in some detail by Julius Pokorny, Indogermanisches Etymologisches Wörterbuch. According to him, it comes from Indo-European el-, elei-, lei-, "to bow", "to bend", "elbow". The Latin meaning was discussed in detail by W. Gebert.[6]

The sense is that a limit bends across one in some way. The limes was a cross-path or a cross-wall, which the Romans meant to throw across the path of invaders to hinder them. It is a defensive strategy. The Romans never built limites where they considered themselves free to attack. As the emperor had ordered the army to stay within the limites except for punitive expeditions, they were as much a mental barrier as material. The groups of Germanic warriors harrying the limes during summer used the concept to full advantage, knowing that they could concentrate and supply themselves outside the limes without fear of preemptive strikes.

In a few cases, they were wrong. The limit concept engendered a sentiment among the soldiers that they were being provoked by the Germanic raiders and were held back from just retaliation by a weak and incompetent administration: they were being sold out. So they mutinied. The best remedy for a mutiny was an expedition across the limes. Toward the later empire, the soldiers assassinated emperors who preferred diplomacy and put their own most popular officers into the vacant office. 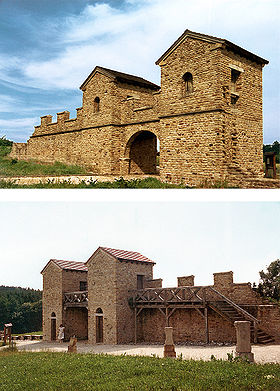 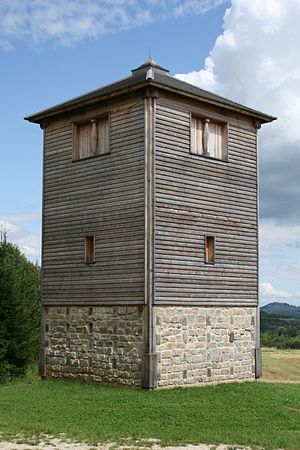 Roman writers and subsequent authors who depended on them presented the limes as some sort of sacred border beyond which human beings did not transgress, and if they did, it was evidence that they had passed the bounds of reason and civilization. To cross the border was the mark of a savage. They wrote of the Alemanni disrespecting it as though they had passed the final limitation of character and had committed themselves to perdition. The Alemanni, on the other hand, never regarded the border as legitimate in the first place. The Romans were foreigners changing native place names and intruding on native homes and families (see under Alemanni), only to be tolerated at all because they were willing to pay cash for the privilege and offered the blandishments of civilized life.

According to Pokorny, Latin limen, "threshold", is related to limes, being the stone over which one enters or leaves the house, and some have gone so far as to view the frontier as a threshold[dead link] . The Merriam–Webster dictionaries take this view, as does J. B. Hofmann in Etymologisches Wörterbuch des Griechischen under leimon. The White Latin Dictionary denies any connection, deriving limen from *ligmen, as in lien from *leig-[dead link], "tie". The threshold ties together the doorway. The American Heritage Dictionary refuses to go further than Latin limes. .

The Limes in fiction

The novel series Romanike is set at the Limes Germanicus in the decades until the first assault of Germanic peoples in 161 AD.[7]