From Infogalactic: the planetary knowledge core
Jump to: navigation, search
This article is about the French commune. For the Canadian city, see Limoges, Ontario.

Limoges (/lɪˈmoʊʒ/;[1] French pronunciation: ​[li.mɔʒ];[1] Occitan: Lemòtges or Limòtges) is a city and commune, the capital of the Haute-Vienne department and the administrative capital of the Limousin région in west-central France.

Limoges is known for its medieval and Renaissance enamels (Limoges enamels) on copper, for its 19th-century porcelain (Limoges porcelain) and for its oak barrels which are used for Cognac production.

Scarce remains of pre-urban settlements have been found in the area of Limoges. The capital of the Gaulish people of the Lemovices, who lived in the area, was probably some kilometres south-east of Saint-Léonard-de-Noblat.

The city proper was founded as Augustoritum by the Romans, around 10 BC: "rito-" is Gaulish for "ford". The foundation was part of the reorganization of the province by the emperor Augustus, hence the new name. The Roman city included an amphitheatre measuring 136 x 115 metres, a theatre, a forum, baths and several sanctuaries. According to tradition, a temple consecrated to Venus, Diana, Minerva and Jupiter was located near the modern cathedral. The city was on the typical Roman square plan, with two main streets crossing in the centre. It had a Senate and a currency of its own, a sign of its importance in the imperial age. Later, like many towns and cities in Gaul, it was renamed after the tribe (here the Lemovices) whose chief town it was; "Lemovices" changed into "Limoges", and "Lemovicinus" for the area around changed into "Limousin".

Limoges was evangelized by Saint Martial, who came to the city around 250 with two companions, Alpinianus and Austriclinienus. However, in the late 3rd century it was increasingly abandoned, due to unsafe conditions created by the invasions of various Germanic tribes. The population was concentrated instead in a more easily fortifiable site, the modern Puy Saint-Étienne, which is the centre of the modern Limoges. Starting from the construction of the Abbey of St. Martial (9th century), another settlement grew around the tomb of the saint, while a third area, next to the residence of the viscount (the future Castle of Saint Martial), seems to have been populated from the 10th century.

Starting from the 11th century, thanks to the presence of the Abbey of St. Martial and its large library, Limoges became a flourishing artistic centre. It also was home to an important school of medieval music composition, which is usually called the St. Martial School; its most famous member was the 13th-century troubadour Bertran de Born. 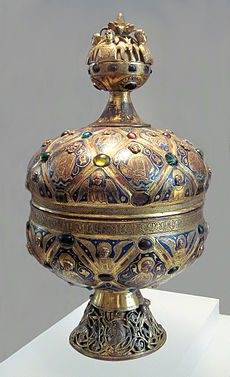 Limoges enamel ciborium with champlevé enamel, and center rim in pseudo-Kufic script, circa 1200.[2]

In the 13th century, at the peak of its splendour, central Limoges consisted of two fortified settlements.

In 1370, Limoges was occupied by Edward, the Black Prince, who massacred some 3,000 residents, according to Froissart. See Massacre of Limoges. However, Froissart's account is described in Jonathan Sumption's account of the war as "exaggerated and embroidered with much imaginary detail." Citing a monk of St. Martial's Abbey, Sumption posits that a more reliable figure for the number killed is around 300 people, "perhaps a sixth of the normal population," with another 60 members of the garrison of 140 dead as well.[3]

The city and castle were united in 1792 to form the single city of Limoges. During the French Revolution several religious edifices, considered symbols of the Ancien Régime, were destroyed by the population: these included the Abbey of St. Martial itself.

Some years later the porcelain industry started to develop, favoured by the presence of kaolinite which was discovered near Limoges in 1768.[4] Many of the inhabitants became employed in the new sector or in connected activities (including the lumbering of wood needed for firing the porcelain) in manufacture and exporting needed for European distribution of Limoges Boxes, dinnerware, and other porcelain wares. 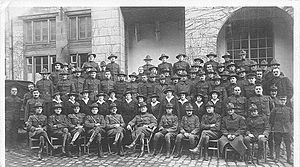 In the 19th century Limoges saw strong construction activity, which included the destruction and rebuilding of much of the city centre. This was necessary, as the town was regarded as unhealthy because of prostitution.[citation needed] The unsafe conditions of the poorer population is highlighted by the outbreak of several riots, including that of July–November 1830; April 1848 and early 1905. The first French confederation of workers, Confédération Générale du Travail (CGT) (General Confederation of Labour), was created in Limoges in 1895.

During the Holocaust, many Jews from Alsace were evacuated to Limoges.

Limoges experiences an oceanic climate (Köppen climate classification Cfb) common to much of Western France. Most precipitation occurs between October and February. On 27 December 1999, winds reached 148 km/h. On average, the city receives 41 days of frost and seven days of snow each winter. In June, July and August, precipitation tends to come only from violent thunderstorms which form over the Bay of Biscay. 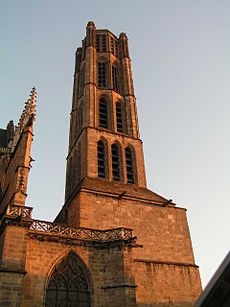 The Cathedral of Limoges 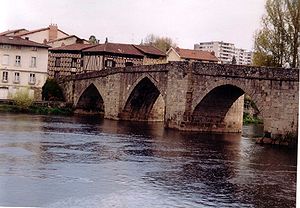 "The Marketplace at Limoges" is the name of a section of Pictures at an Exhibition by Modest Mussorgsky.

In 1768,[4] kaolin, a rock rich in fine, white clay which is used for making porcelain, was discovered at Saint-Yrieix-la-Perche, near Limoges. Under the impetus of the progressive economist Anne Robert Jacques Turgot, Baron de Laune, who had been appointed intendant of this impoverished and isolated region, a new ceramics industry was developed, and Limoges porcelain became famous during the 19th century. However, Limoges porcelain is a generic term for porcelain produced in Limoges rather than at a specific factory. More than 50% of all porcelain made in France comes from Limoges[4]

'...Mr. Silvero/ With caressing hands, at Limoges/ Who walked all night in the next room.'

Eliot's compatriot and mentor Ezra Pound visited Limoges in 1912 when researching the landscape and the work of the 12th-century troubadours. As he states in his essay Troubadours: Theirs Sorts and Conditions: '...a man may walk the hill roads and river roads from Limoges and Charente to Dordogne and Narbonne and learn a little, or more than a little, of what the country meant to the wandering singers...'

There is also a reference to Limoges in Jean-Paul Sartre's novel Nausea, near the middle of the book in the Shrove Tuesday section, when the magistrate says: "I had a similar case at the beginning of my career. It was in 1902. I was deputy magistrate at Limoges..."

The main railway station of Limoges is the Gare de Limoges-Bénédictins. It offers direct connections with Paris, Lille, Bordeaux, Toulouse, Lyon and several regional destinations. The motorway A20 connects Limoges with Vierzon and Paris to the north, and Brive-la-Gaillarde and Toulouse to the south. The nearest airport is Limoges – Bellegarde Airport.

Urban transport in Limoges and its metropolitan area is operated by Société de transports en commun de Limoges Métropole (STCL). The Limoges urban bus network includes the Limoges trolleybus system, one of only four such systems currently operating in France.

Limoges was the birthplace of 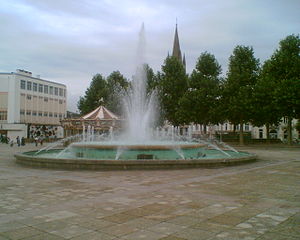