From Infogalactic: the planetary knowledge core
Jump to: navigation, search
For other uses, see Limousin (disambiguation).

listen); Occitan: Lemosin) is a former administrative region of France. Since 1 January 2016, it is part of the new region Aquitaine-Limousin-Poitou-Charentes.[3] It is composed of three departments: Corrèze, Creuse and Haute-Vienne.

Forming part of the southwest of France, Limousin is bordered by the regions of Centre to the north, Poitou-Charentes and Aquitaine to the west, Midi-Pyrénées to the south and Auvergne to the east. Limousin is also part of Occitania.

The modern region of Limousin is essentially composed of two historical French provinces:

Beside these two main provinces, Limousin is also composed of small parts of other former provinces:

With a slowly rising population of just under 750,000, Limousin is the second-least populous region in Metropolitan France after Corsica.[citation needed] 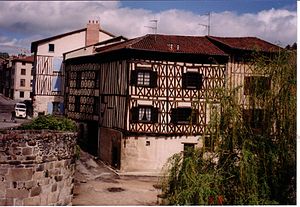 Limousin is an essentially rural region. Famed for some of the best beef farming in the world, herds of Limousin cattle—a distinctive chestnut red—are a common sight in the region. The region is also a major timber producing area.

Due to its rural locality, it is also famed for its groves of French Oak, so prized for its distinct characters and flavors in wine fermentation that vintner Rémy Martin has exclusive rights to its oak groves. It is a partnership that is over 100 years old.

The regional capital, Limoges, was once an industrial power base, world-renowned for its porcelain and still a leader and innovator in electric equipment factories (which originally used porcelain as an insulator). However, large factories are now few in number.

Some of the rivers belonging to the Loire basin run through the north, west and east of the region, waterways belonging to that of the Dordogne through the south. The region is crossed by three major rivers: the Vienne, the Dordogne and the Charente (which has its source in Haute-Vienne). The region is well known for the high quality of its water and for offering first-rate fishing. 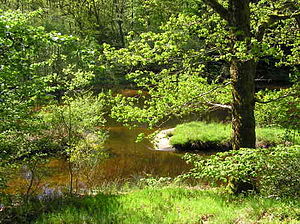 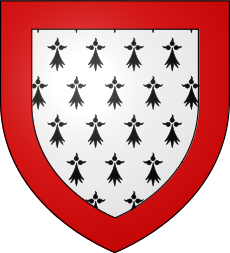 Limousin is one of the traditional provinces of France. Its name is derived from the name of a Celtic tribe, the Lemovices which capital was in Saint-Denis-des-Murs and which main sanctuary was recently found in Tintignac, a site which became a major site for the Celtics studies thanks to unique objects which were found such as the carnyces, unique in the whole Celtic world.[5]

Aimar V of Limoges was a notable ruler of the region. 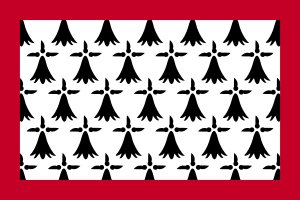 Flag of the Limousin region in France.

Until the 1970s, Occitan was the primary language of rural areas. There remain several different Occitan dialects in use in Limousin, although their use is rapidly declining. These are:

Pâté aux pommes de terre is one of the specialties of Limousin, as well as of the neighbouring department of Allier. Clafoutis is a local dessert.

Perhaps due to its rural character, Limousin has maintained a strong tradition of traditional music, with ancient instruments such as the bagpipe (called chabrette, Chabreta in occitan) and hurdy-gurdy remaining popular.