From Infogalactic: the planetary knowledge core
Jump to: navigation, search
Not to be confused with Limousin.
"Limousines" redirects here. For the band, see The Limousines. 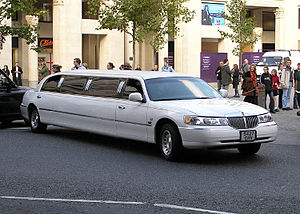 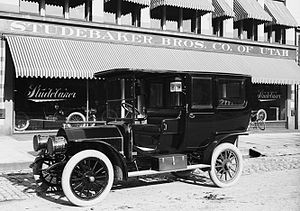 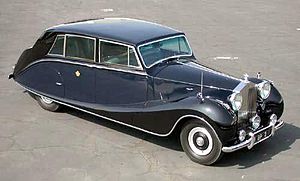 A limousine (or limo) is a luxury sedan or saloon car generally driven by a chauffeur and with a partition between the driver and the passenger compartment. Limousines often have a lengthened wheelbase. Although usually associated with luxury vehicles, the word "Limousine" is also simply a generic term in some countries for a standard sedan bodystyle.

It was originally an enclosed automobile with open driver's seat.[1] It is named after a type of cloak and hood that was worn by the inhabitants of the Limousin region that later resembled the covering of a carriage and much later used to describe an automobile body with a permanent top that extended over the open driver's compartment.[2][3]

In modern use, a limousine is a luxury sedan or saloon car, especially one with a lengthened wheelbase or driven by a chauffeur. The chassis of a limousine may have been extended by the manufacturer or by an independent coachbuilder. These are called "stretch" limousines and are traditionally black or white. Limousines are usually liveried vehicles, driven by professional chauffeurs. As the most expensive form of automobile ground transportation, limousines are culturally associated with wealth or power and are commonly cited as examples of conspicuous consumption. Among the less wealthy, limousines are often hired during special events (most commonly weddings, proms, and bachelor parties).

In 2012, the limousine market size was over $4 billion in the United States. There were more than 4,000 limousine companies employing 42,000 employees.[4] 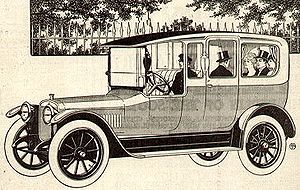 Winton Six Limousine, 1915, with driver in a compartment separate from the passengers, a distinctive limousine feature

The first automobile limousine, built in 1902, was designed so the driver sat outside under a covered compartment.[5] The word limousine is derived from the name of the French region Limousin, because this covered compartment physically resembled the raised hood of the cloak worn by the shepherds there. An alternate etymology has the chauffeur wearing a Limousin-style cloak in the open driver's compartment, for protection from the weather.[6]

The first “stretch limousine” was created in Fort Smith, Arkansas, around 1928 by a coach company named Armbruster. These cars were primarily used to transport famous “big band” leaders, such as Glenn Miller and Benny Goodman, and their bands and equipment. These early stretch limousines were often called “big band buses”.

In German-speaking countries, a Limousine is simply a sedan, while a lengthened-wheelbase car is called Stretch-Limousine.

Traditionally, the limousine has been a large car with a long wheelbase with a permanent division between driver and passengers. Two or three occasional or jump seats are usually mounted in the ample footspace of the rear compartment of long wheelbase cars, facing forward behind the driver. These seats face forward. They fold into the floor when not in use. In this way, up to five persons can be carried in the aft compartment in comfort, and up to two additional persons carried in the driver's compartment, for a total capacity of seven passengers in addition to the driver. This type of seat configuration has become less popular in recent funeral trade limousines.

The last production limousine, by Cadillac, with forward-facing jump seats was in 1987 (with their Fleetwood Series 75 model), the last Packard in 1954, and the last Lincoln in 1939, though Lincoln has offered limousines through their dealers as special order vehicles at times. Several Lincoln Premier cars were also built, one being owned by Elvis Presley. Vehicles of this type in private use may contain expensive audio players, televisions, video players, and bars, often with refrigerators. The President of the United States has ridden in a variety of types of limousine stretching back to 1899.[10] 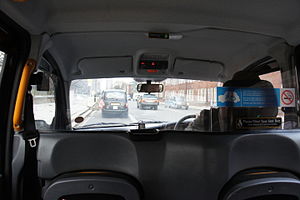 the division in a London cab, black occasional seats folded up to bulkhead

A similar design is used for the black cabs of London. The jump seats, also referred to as taxi-tip-seats, usually carry advertising on the underside; the advertisements are visible to the passengers when the tip-seats are not in use.

Where a vehicle is built to carry a large number together for the funeral trade, one or two full width, normal, forwards facing seats are often added. These may be fixed or fold down into the floor. 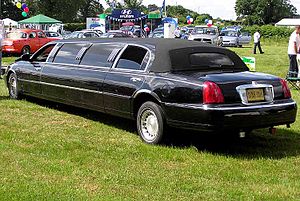 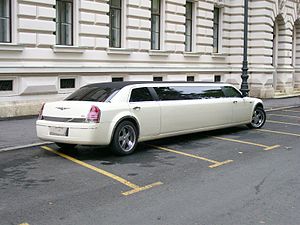 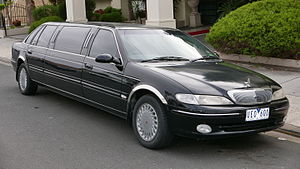 It is simpler to determine the effects of altering a separate chassis than it is to determine the effects of altering a load-bearing unitized platform body. Coach builders have built models based on SUVs with a separate load-bearing chassis. The weight requirements of these limos do not meet some/most states Department of Motor Vehicle Rules and Regulations. Limousine manufacturers are often challenged to meet safety, exhaust, weight, and other standards with longer vehicles that hold more passengers (weight).

(list does not include those produced by 3rd party companies) 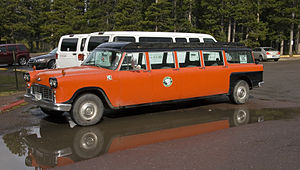 Not a true limousine, but rather in its design and application is between a sedan and a bus. While a bus will have a central interior aisle for access to seating, a stage has multiple doors that allow access to transverse forward-facing seats. Examples of the type were constructed not only from sedans (e.g., Chrysler New Yorker, Cadillac DeVille, Checker Aerobus), but also from station wagons; many of the station wagon conversions sported a large rack, running the length of the roof, for carrying the passengers' baggage.

This type of vehicle was once rather common in some locations. An example of its use was in the transport of travelers arriving by railroad at Merced, California to travel to Yosemite National Park in the first half of the 20th century and at other remote parks. In Yosemite, passengers would then stay in rustic platform tent camps or more expensive lodges and hike or rent bicycles for movement around the park.[citation needed] In Glacier National Park, the stages were referred to as "Jammers" in reference to the nickname of their gear-jamming drivers.[11] Some funeral homes maintain six-door stages to carry the family of the deceased between the church and the cemetery. 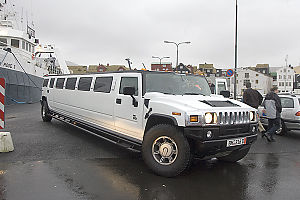 Sometimes a coach builder or car designer will develop the "ultimate" stretch limo, adding amenities that are somewhat impractical but which make a significant design statement. One such design includes tandem rear axles to support the weight of an operational hot tub.

These extensive limousine conversions have been performed on several luxury marques and fast cars, including: Bentley, BMW, Cadillac, Chrysler, Ford, Holden, Hummer, Infiniti, Jaguar, Lexus, Lincoln, Mercedes-Benz, Rolls-Royce, Volkswagen and Daimler. In the United States the most popular vehicles for stretch limousines conversion are the Lincoln Town Car, Cadillac XTS, Cadillac Escalade, Chrysler 300, Hummer H2, Ford Excursion, and the Lincoln Navigator. There are even instances of Corvettes, Ferraris, Mini Coopers and VW Beetles being stretched to accommodate up to 10 passengers. 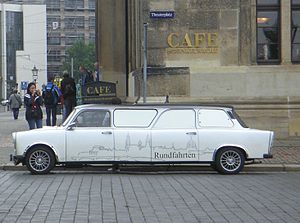 A variety of vehicles have been converted into novelty limousines.[12] They may be rented for weddings for those "looking to travel in style".[13]

An example is the East German Trabant that was designed for a low manufacturing cost and incorporated body panels made from a rag fiber and plastic resin material. Volkswagen Beetles, Fiat Pandas, and Citroën 2CV vehicles are occasionally stretched into limousines.

Novelty color limousines, such as purple and pink, are another way to express individuality when renting a vehicle for special occasions.[14]

In some countries, the driver may need to have a different driving license to that of a car license.

In the U.S., Canada, and Australia, limousines can be any type of car operated by a "limousine service" or "car service". The car should be luxury and well equipped. Such companies offer cars with drivers, often for shared rides on popular routes, such as airport limousines, also known as shuttle limo. Limousines usually have to be booked in advance and are not hired on the spot as taxi cabs can be.